The ZTE company has prepared a new projector called ZTE SPRO Plus that runs on Android 6.0 Marshmallow. SPRO Plus projector is also a small Android-powered tablet. The device is to appear this summer. The price is not yet known. This interesting projector was shown during the MWC 2016. 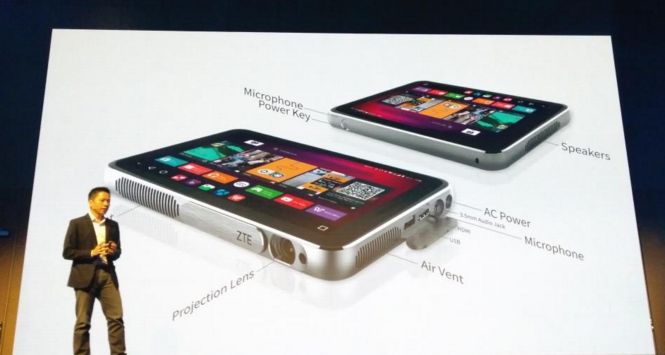 ZTE Spro Plus is a compact, portable projector  with Android 6.0 Marshmallow. The device has a battery with a capacity of 11,500 mAh. It’s powered by a Qualcomm Snapdragon 801 processor and has 3GB of RAM and 128GB of storage. ZTE Spro Plus is equipped with a 8.4-inch AMOLED display with a resolution of 2560 x 1440 pixels, which allows you to view multimedia and control SPRO Plus. The device is a bit thicker and heavier than a typical tablet, measuring about 228.8*150*24.8mm and weighs about 2.2 pounds.

ZTE announces that SPRO Plus has a laser lamp, not the LED lamps, so it is able to get 500 lumens. Life of the bulb is about 20 thousand viewing hours. ZTE also says that the projector can be used even in bright daylight. The projector is able to generate an image with a resolution of 1366 x 768 pixels. The device also has two 4 watt JBL speakers. There were also Wi-Fi and USB. ZTE will also offer a range of accessories for the SPRO Plus, includign a remote control, keyboard, mouse, and gamepad.