We are after the tests the new Android TV Box from WeTek called WeTek Air. So today we want to introduce you to WeTek Air review. Will this new Hybrid TV Box (equipped with cable/ terrestrial tuner DVB-C/T/T2) with Android TV OS repeat the success of the previous popular WeTeK Play TV Box, now we can tell you that for sure. Why? you will learn everything from WeTek Air review. We invite you to read.

The following video from our YouTube channelwhere you can take a look at more on WeTek Air TV Box and bundled accessories.

WeTek Air is very well made with attention to detail. The housing is made of high-quality plastic. TV Box visually looks very aesthetically. The housing has a lot of holes on the top of the cover (on the right) and on the sides, so there are no problems with ventilation.  The version we received was equipped with cable / terrestrial DVB-C / T / T2 tuner, but you can buy a device with DVB-S2 tuner, without a tuner or buy only a tuner separately (for €29.90). We will find on the front power button with power LED, on one of the sides is a micro SD card slot and on the rear panel: Antenna In, 2X USB 2.0 port, RJ45 Ethernet port, SPDIF optical port, HDMI 2.0a port, and 12V/1.5A DC jack. At the bottom of the device, you will find information such as serial number and MAC address, also holes and two rubber straps for a stable position.

WeTek Air comes with Bluetooth wireless remote control. Unfortunately, there is a lack of air mouse functionality. If you do not add a bluetooth connection for the remote at the beginning of the configuration (needed for the voice remote feature), you can do so at any time by adding a bluetooth device in the settings, and you need to hold the application button and home button at the same time. Bluetooth Voice Remote Control works very well. Recognizes voice commands without any problem. Just press the button with the microphone symbol and say the command.

As mentioned earlier, WeTek Air runs on Android TV OS 8.0, so the device’s operation is easy, intuitive and known from other TV Boxes, such as the Xiaomi Mi Box. Setup wizard takes fast. You can configure the device step by step. Android TV launcher/Home screen is based on recommendations from many external sources, Youtube, Google Movies, Google Play Games, Google Play Music etc. The recommended content is displayed in rows. On the Home screen, you can also find a preinstalled WeTV app from WeTek (more later).

We can choose typically the resolution of FHD 1920×1080 (1080p 60Hz) but you can also adjust the preferred resolution ( also 4K, you need 4K TV) or set the auto switch. Everything worked stable and very quickly without delays.  WiFi connection works good and stable, but Wifi connection (802.11a/b/g/n/ac, Dual-band Wi-Fi 2.4GHz/5GHz) could be faster Download – 18.7Mbps Upload – 34.5Mbps, Ethernet: Download – 95.0Mbps Upload – 37.3Mbps. In addition to the bluetooth remote control with voice feature, we used a standard keyboard, mouse and a gamepad from iPega called iPega PG-9076.  Although the device in its specification has 16GB eMMC, storage has 11GB of data.  Air TV Box comes with built-in Chromecast support (you can stream your favorite entertainment and apps from your phone, tablet or laptop). As we mentioned at the beginning of the TV Box is equipped with Bluetooth remote control with the voice control feature, so by pressing the button with the microphone symbol, you can output voice commands. The service works well and fast. Big plus! You do not have to navigate the remote control, just tell what you are looking for. TV Box supports YouTube 4K (2160p). Unfortunately, the TV Box does not support Netflix 4K and also HD, maybe it requires refinement by WeTek Team. Unable to download Netflix app for Android TV from Google Play store, after installing Netflix_v4.16.1.apk, resolution up to 480p. We also installed the latest Kodi 18.1. If you need to control the TV Box through a smartphone, you can use the Android TV Remote Control appl or our favorite CetusPlay (Install CetusPlay On TV/Box app on TV box and open, Install CetusPlay on a smartphone). The number of applications for Android TV OS is limited. The apps that we use for testing we’ve installed from an external source. On WeTek Air you can play in games from the Google Play store, as on other Android TV Box. Games run smoothly.  Just connect a gamepad or keyboard. We used iPega PG-9076 and played Beach Buggy Racing and Riptide GP2. Below some screenshots.

As mentioned earlier, WeTek Air comes with the pre-installed WeTV app for digital terrestrial TV. The application is advanced, it allows you to search digital TV channels (Live TV), display TV channels, record them on cloud storage (Google Drive, Dropbox) or on the internal storage. Access to Internet TV (files with IPTV sources are needed). Displaying Google Play movies & TV. The application allows many settings, for example, parental control settings, audio settings, recording time, recording schedule, access to EPG and many more. Everything works easily and without problems. More details on the screenshots below.

The Air TV Box runs on the Android TV 8.0.0, Kernel version 4.9.61 and (probably) supports OTA updates. WeTeK Air comes with firmware build number OPR6.170623.013.20190115 release-keys. TV Box is equipped with Amlogic S905D quad-core ARM Cortex-A53 @ processor up to 1.5GHz and GPU Mali-450MP, CPU speed between 100MHz and 1.51GHz. On the following screens, you can see exactly the components used and their specification (Information taken from the CPU-Z app). After using the DRM info (app) we know that WeTek Air TV Box supports Google Widevine Modular DRM with HDCP-1.x and support Microsoft Playready DRM, does not support Marlin DRM and Verimatrix VCAS. The device also does not have root access. Below screenshots.

WeTeK Air is a very good TV Box with Android TV OS and a digital TV tuner. The TV Box is well made, works quickly and stable. Air TV Box copes well with 4K video playback. Operation via Bluetooth remote control with voice control is friendly and easy. It is a pity that remote control does not have an air mouse feature. Connections via WiFi could be much faster. TV Box supports Youtube 4K, unfortunately, it does not support Netflix 4K and HD, maybe it requires optimization by WeTek team. We hope it will be improved. The WeTV app works great and provides good service and many features for Live TV. The price of WeTek Air TV Box is not excessive, and at the price of €129.90 (at the same price was WeTek Play, which had a much worse specification and did not have Android TV OS) we get friendly, easy to use (via voice remote control) 4K Hybrid TV Box with access to many Android TV apps and services. If you are looking for comfortable use TV Box with Android TV, which has vendor support (access to updates) and with equipped with cable/ terrestrial tuner DVB-C/T/T2 for Digital TV, necessarily you should consider buying WeTek Air 4K Hybrid TV Box. 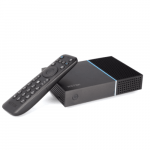