We’re already after testing, so today, we would like to show you the MINIX NEO U22-XJ review.

MINIX NEO U22-XJ is another, after Beelink GT-King / Beelink GT-King Pro and UGOOS AM6 powerful Android TV Box dedicated to home entertainment. Like the previous models, the NEO U22-XJ TV Box is also powered by the powerful Amlogic S922X SoC, this time another variation, the Amlogic S922X-J SoC. MINIX NEO U22-XJ is not only an alternative to previous models, but also valuable Android TV Box that can easily compete with TV Boxes other vendors, and even? well, you will find more in our review and in conclusion. We invite you to read.

We want to say thanks to from MINIX company (MINIX Technology Limited) for sending us a MINIX NEO U22-XJ TV Box and MINIX NEO A3 V2.0 Backlit Version Wireless Air Mouse with Voice and QWERTY Keyboard to review.

The MINIX Official Store at Aliexpress for $164.24

MINIX NEO A3 v2 Backlit Version (not only for MINIX’s TV Box) is available at the MINIX Official Store at Aliexpress for $34.90

The following video from our YouTube channel where you can take a look at more MINIX NEO U22-XJ TV Box with bundled accessories, and below also MINIX NEO A3 v2.0 unboxing video.

The NEO U22-XJ TV Box has a well-known and characteristic MINIX’s aluminum housing. The quality of workmanship is very aesthetic. As always with the MINIX TV Box, the device looks great and stylish. You get the impression that this is a decent device from a higher shelf.

On the upper cover, there is a characteristic MINIX logo. The front panel has an IR receiver. On the right side is a Power button, 3x USB 3.0, TF card slot, and USB-C OTG port. On the left, there is an external Wifi antenna and Kensington lock. On the rear panel are DC jack, Gigabit RJ45 Ethernet port, HDMI 2.1, optical S / PDIF port, 3.5mm Audio Jack. At the bottom of the device, there are four rubber pads to prevent shifting and information about the serial number and MAC address. TV Box comes with simple remote control (known from other MINIX’s TV Boxes) but without the mouse cursor. Below pictures.

NEO A3 is the second generation of the popular remote control with Wireless Air Mouse with Voice, QWERTY Keyboard, and Six-Axis Gyroscope additionally supports backlight buttons. Voice Remote Control works very well. Recognizes voice commands without any problem. Just press the button with the microphone symbol and say the command (supported by Google Assistant). All you have to do is put the 2.4G USB receiver in the USB port at TV Box. Air mouse works great, makes using the TV Box easier, and works great when playing for example in Fruit Ninja / Angry Birds. QWERTY keyboard (also backlit) makes typing easier. Backlighting makes operation easier at night. It’s a really great product that also works with other Android TV Boxes. Below pictures. We recommend MINIX NEO A3 v2.0

In MINIX NEO U22-XJ we have the option of choosing a MINIX Metro launcher that looks great and has well-spaced features, and a typical launcher/wallpaper on which we can set selected applications. On the main screen we can also display the status bar (can be turned off in the settings).

After starting the device and connecting to the Internet, we receive information about the available firmware via OTA, a Big Plus!. You can update the device to the latest version without a problem and quickly (V003A).

We can choose typically the resolution of FHD 1920×1080 (1080p 60Hz) but you can also adjust the preferred resolution or set the auto switch. Everything worked stable and very quickly without delays. We had no problem with Ethernet and WiFi connection to the router and to the Internet. Wifi 2×2 MIMO works really fast. Ethernet: Download – 315Mbps Upload – 45.7Mbps, WiFi: Download – 219Mbps Upload – 30.8Mbps.  In addition to remote control with an air mouse feature, we used a standard keyboard and a gamepad from iPega called iPega PG-9076.

The device has 4GB DDR RAM and 32GB eMMC. TV Box supports DLNA and also Miracast. Unfortunately, SAMBA does not work, while in the next firmware, the MINIX team is to fix the problem. In this firmware, you can boot CoreELEC OS from USB 3.0. If you need to control the TV Box through a smartphone, you can use CetusPlay (Install CetusPlay On TV/Box app on TV box and open, Install CetusPlay on a smartphone).

NEO U22-XJ TV Box, unfortunately, supports Netflix up to 540p (we have installed the Netflix version 6.26.1 build 15 31696) and 1080p Youtube (only full HD), but 4K works via YouTube for Android TV. In addition, TV Box has a lot of picture settings (Screen rotation, TV Dolby Vision, etc. ). TV Box comes with preinstalled Kodi 18.6 “Leia”. Of course, On NEO U22-XJ you can play in games from the Google Play store. We can confidently say that this is an Android TV Box perfect for games. Games run smoothly with maximum settings. Just connect a gamepad or keyboard or use NEO A3. We used iPega PG-9076 and played Beach Buggy Racing, Asphalt 8, PUBG Mobile, Ninja Fruit, and Angry Birds.  Below a lot of screenshots.

Below screenshots from the CPU-Z app, DRM info app, and Root Checker app. As we mentioned, you can enable ROOT Access in MINIX Settings, and we did it.

For testing, we use the AnTuTu Video Tester 3.0 app and AnTuTu Benchmark v8.3.4.

The following table of video samples tested for Kodi 18.6.

If you are looking for a really good and efficient TV Box for home cinema / home entertainment center, MINIX NEO U22-XJ is certainly for you. Although it is not Google Certified and does not support Netflix HD / 4K it has many advantages. Copes well with 4K video playback, has fast and stable WiFi, gigabyte Ethernet connection, valuable additional MINIX settings, is efficient in android games, has a great design (aluminum housing), supports Dolby Audio and Dolby Vision. Of course, the most important feature in all of these is the FOTA update. MINIX company ensures frequent updates (via OTA) of its devices to satisfy users. In combination with MINIX NEO A3 v2.0 air mouse with voice control and QWERTY keyboard (with backlit) using NEO U22-XJ is even more simple and fun. The price is not low, but still, it is worth buying NEO U22-XJ. We recommend MINIX NEO U22-XJ TV Box and MINIX NEO A3 (backlit version). 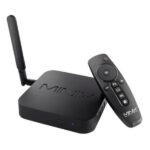