We had the opportunity to test the new ZIDOO H6 PRO also with the latest firmware, so today we want to introduce you to ZIDOO H6 PRO review. This is another great TV Box from ZIDOO, which also has a new Allwinner H6 as one of the few on the market. The new ZIDOO H6 PRO has many features, one of which is Netflix HD support and (and at the moment) Youtube 2K and others. Of course, the TV Box, and more precisely the firmware still requires optimization, as you will find in the review. Together we follow the standard stages of our review. We invite you to read. 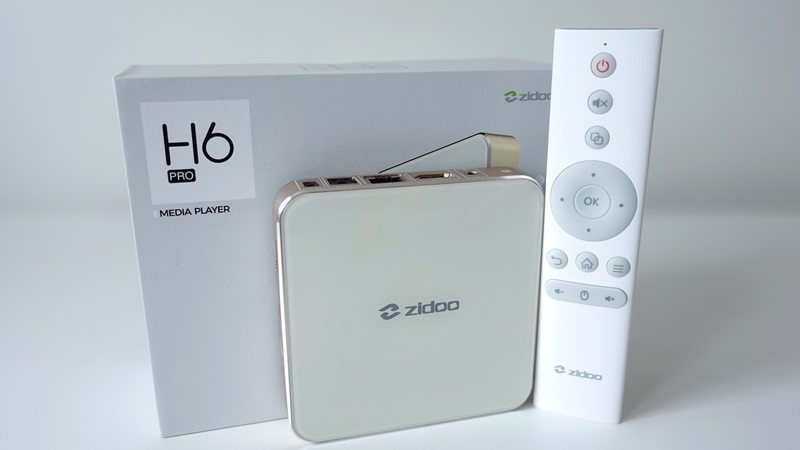 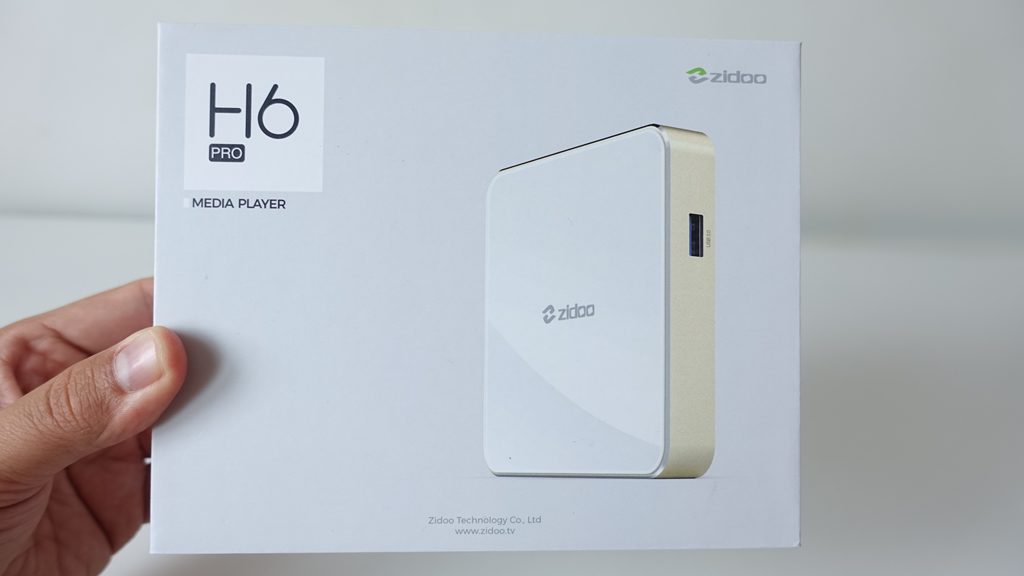 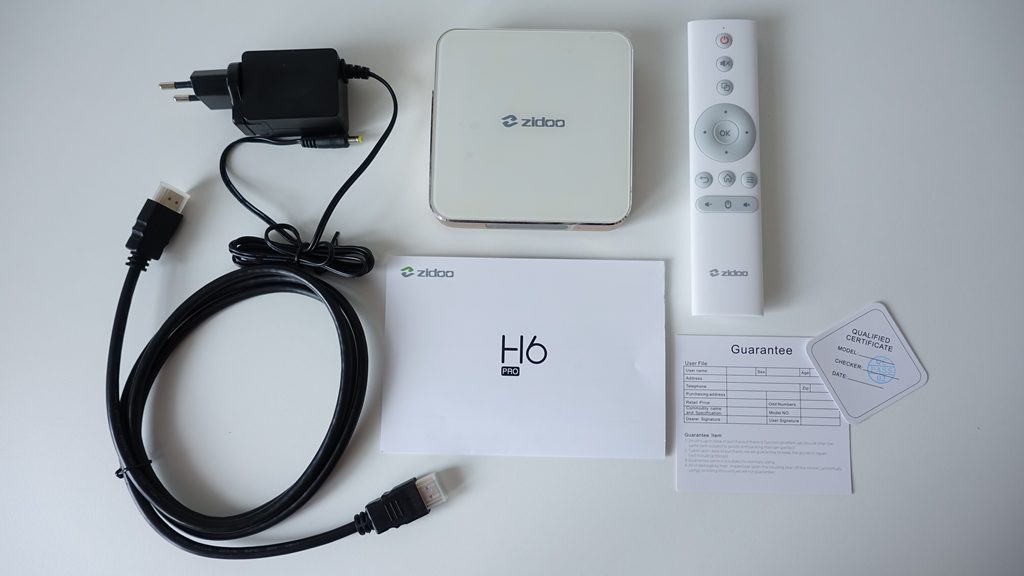 The following video from our YouTube channel where you can take a look at more ZIDOO H6 PRO TV Box and bundled accessories.

ZIDOO H6 PRO is a small TV Box, and looks very elegant and aesthetically. The top cover is made of glossy white plastic and protected by a protective film (pre-scratch). Also on the white cover will not be seen fingering, as in the case of a black cover (ZIDOO X7). The sides of the TV Box and bottom are made of aluminum (gold color), as in the case of top flagship TV Boxes from ZIDOO: X9S and X10. As mentioned earlier, H6 PRO TV Box is equipped in new Allwinner H6 (CortectA53 architecture and up to 1.8GHz) which supports 4K@60fps-10bit ultra-HD video decoding and low-latency H.264 4K encoding and supports 6K video. There is also supports for HDR10 and HLG HDR, integrated Smartcolor 3.0 display system, more in H6 brief here. The front panel (in a small window) has IR receiver and power LED. On one side there are two USB 2.0 ports (one USB 2.0 OTG) and micro SD card slot. On the next side there is a USB 3.0 port. On the rear panel are: 5V DC jack, AV port, RJ45 Ethernet port, HDMI 2.0a port, and an optical S / PDIFport. 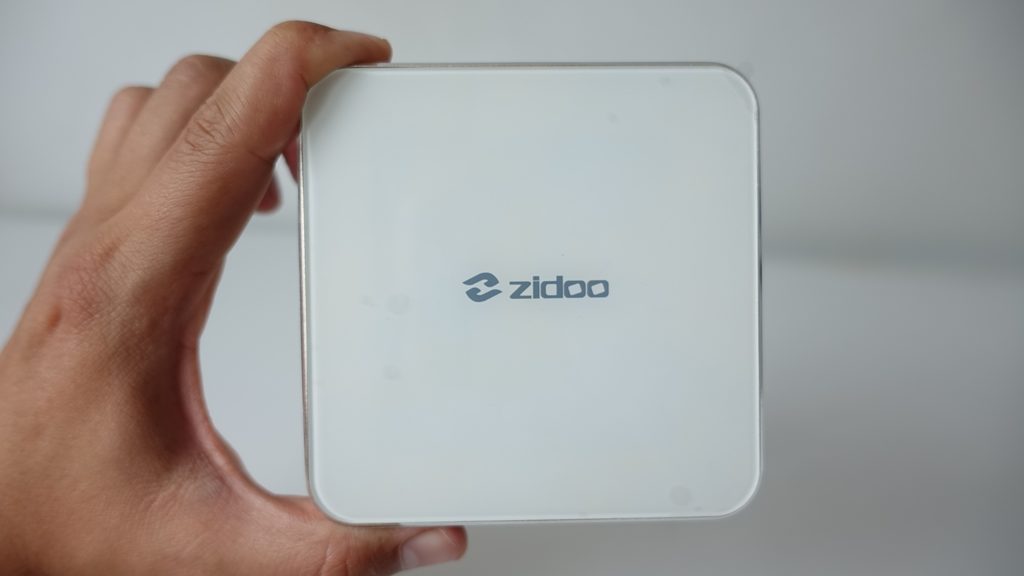 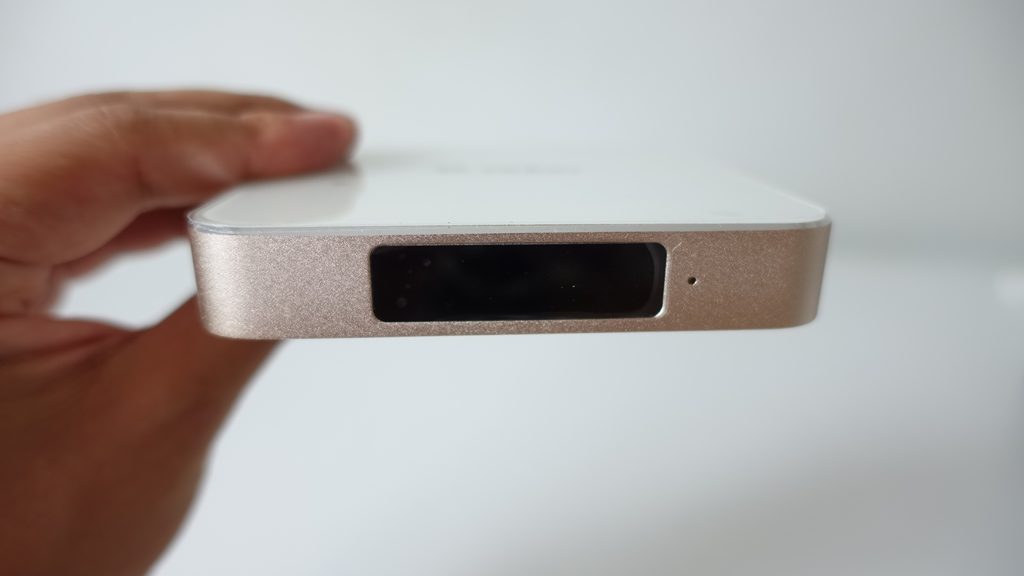 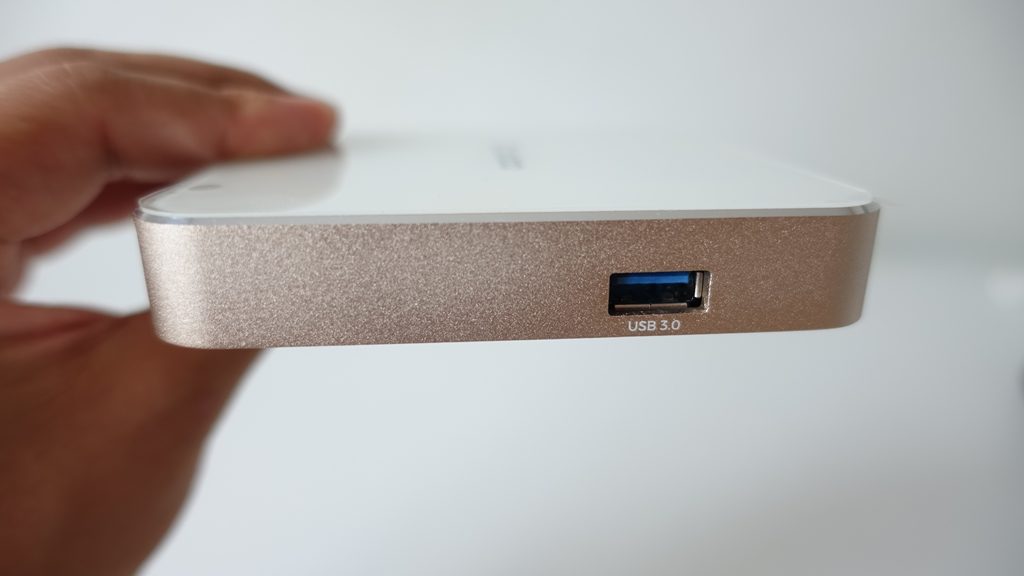 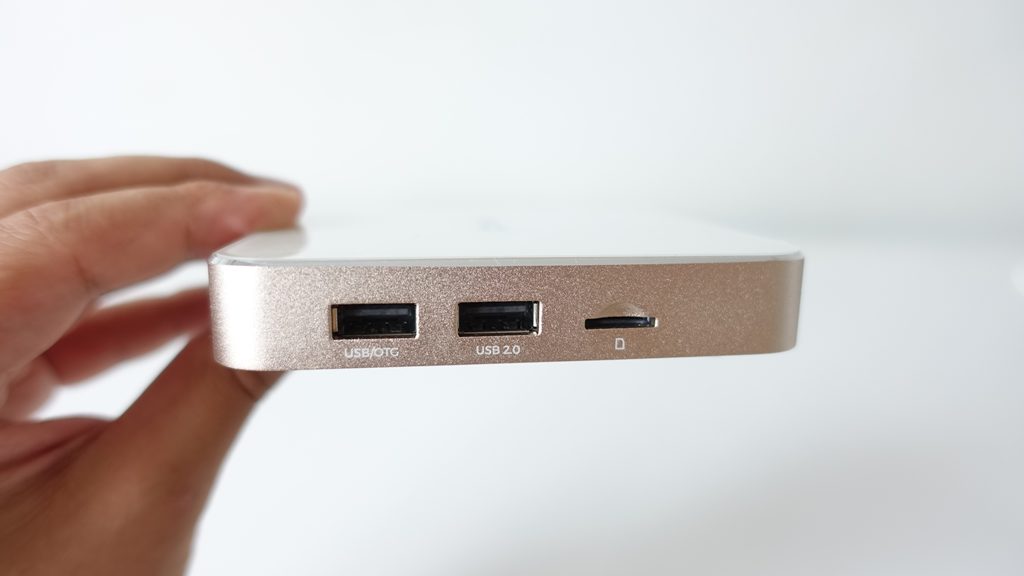 At the bottom of the device there are rubber pads to prevent shifting and warm air outlet. Below also remote control. H6 PRO comes with Bluetooth wireless remote control. 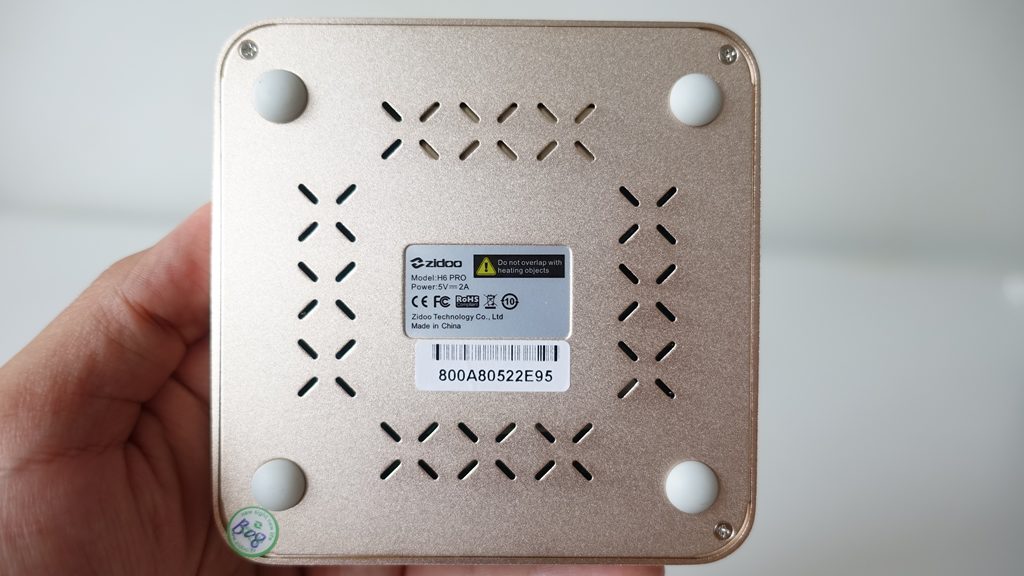 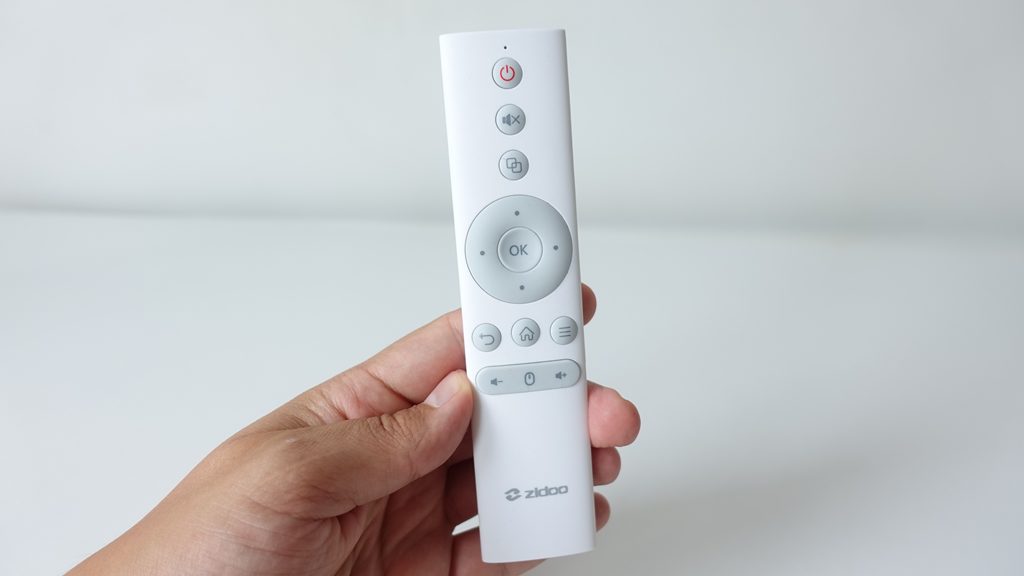 The bluetooth remote control from ZIDOO H6 Pro is great and well placed in the palm of your hand. You do not have to precisely target the remote control to the TV Box to be able to use it because it works on bluetooth (up to 10m). Unfortunately the remote control does not have an air mouse feature (small minus 🙂 ), then it would be great. Below simple manual: 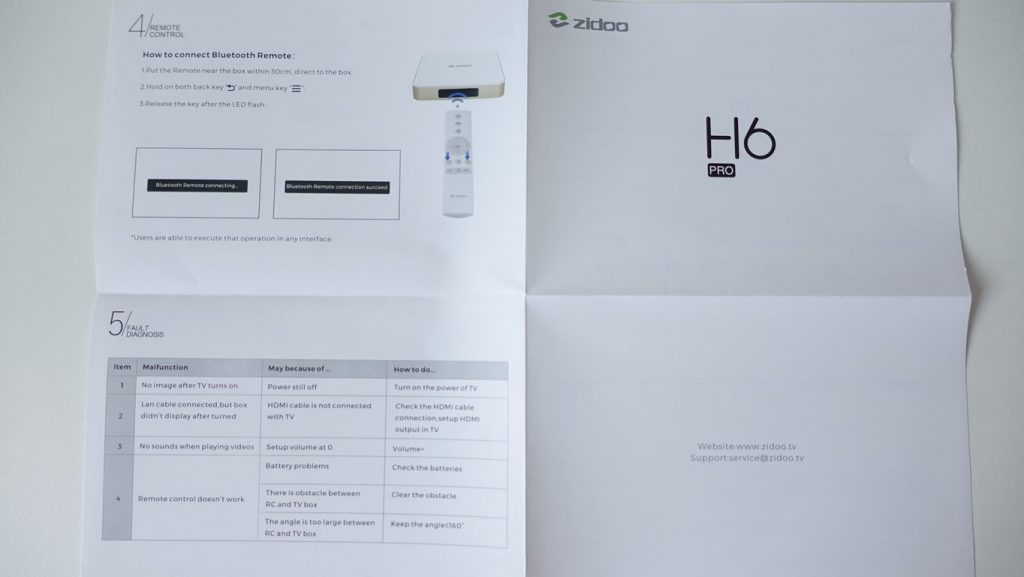 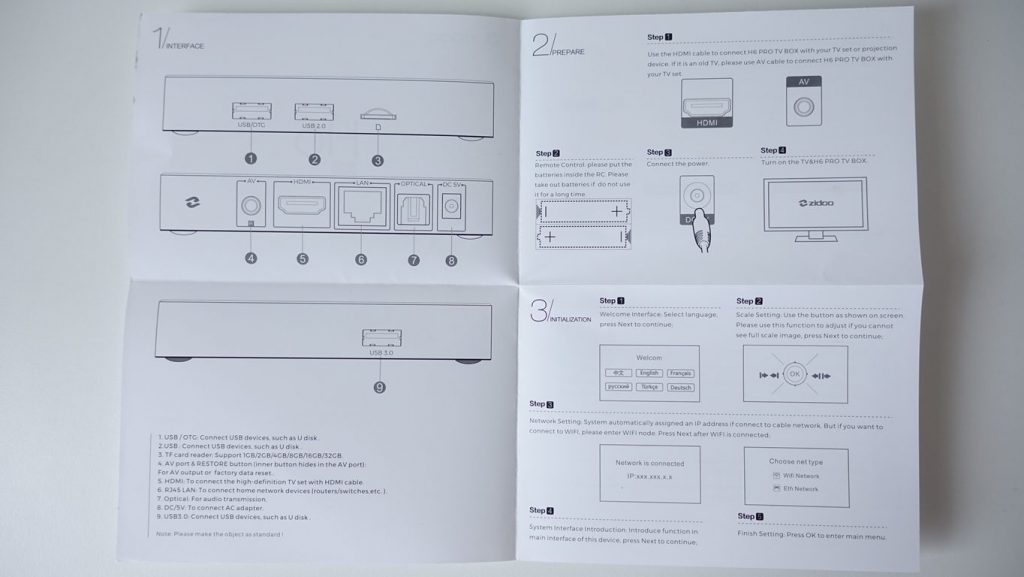 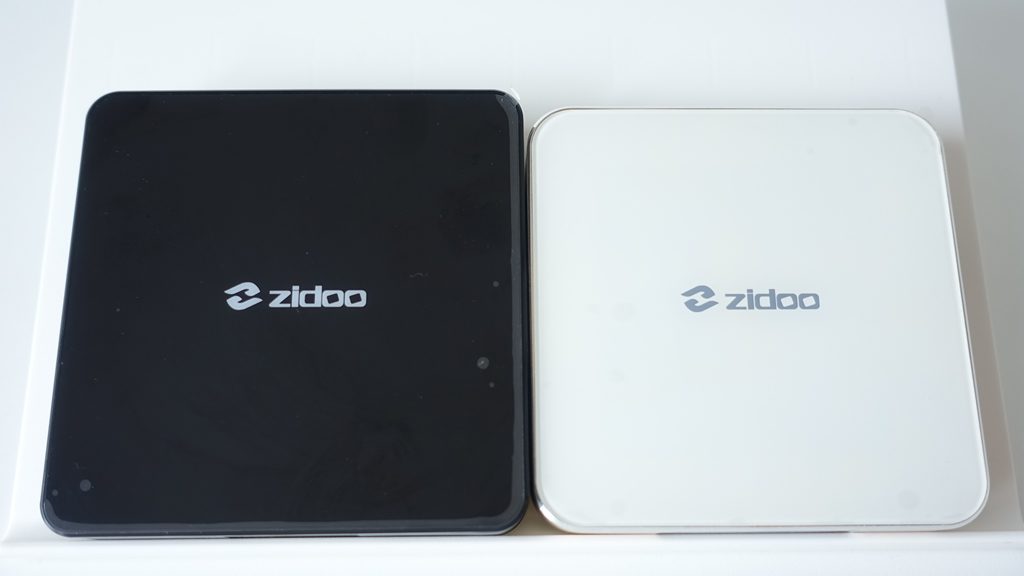 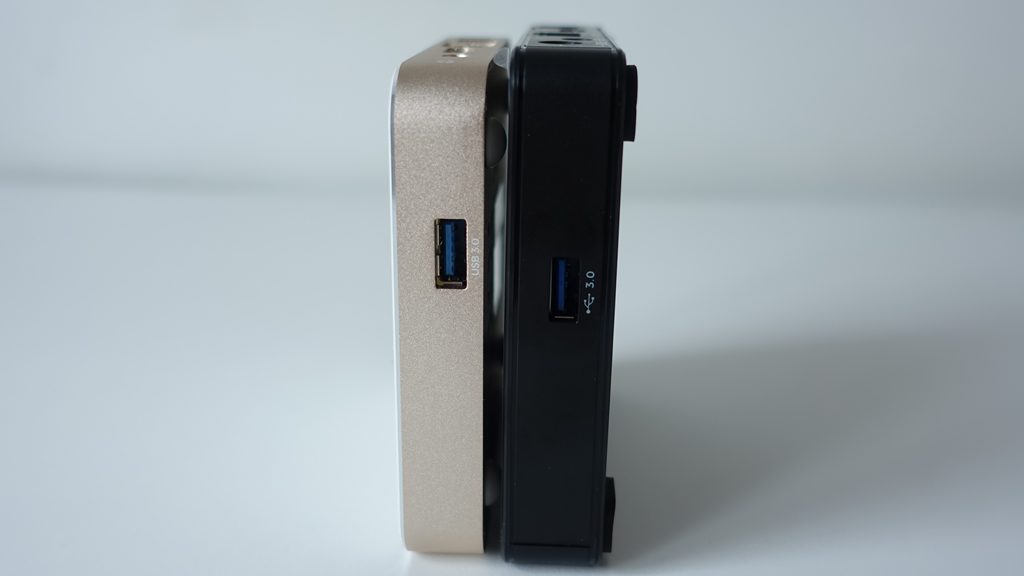 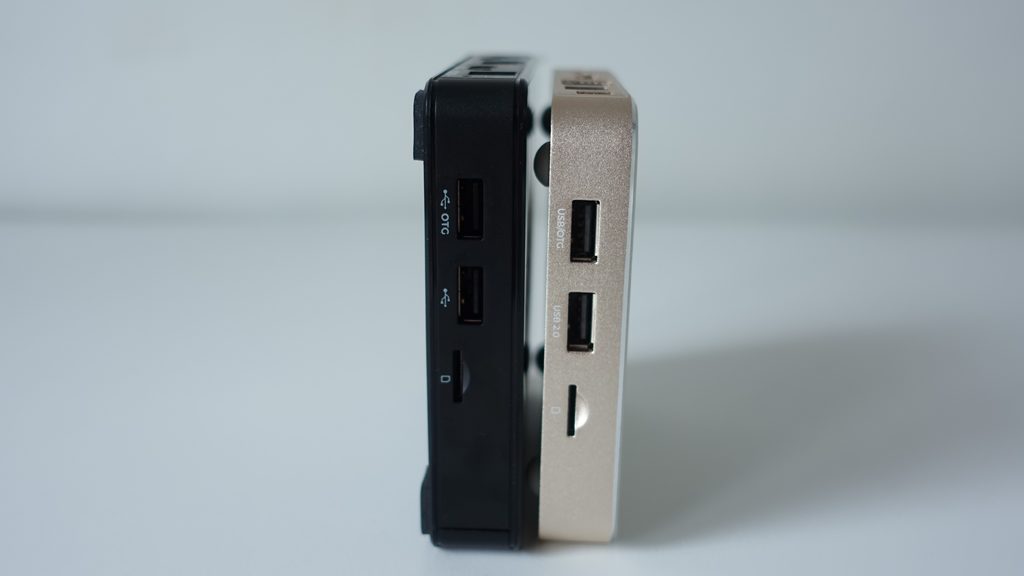 The ZIDOO H6 PRO has a new ZIUI that you can see in the ZIDOO X7. 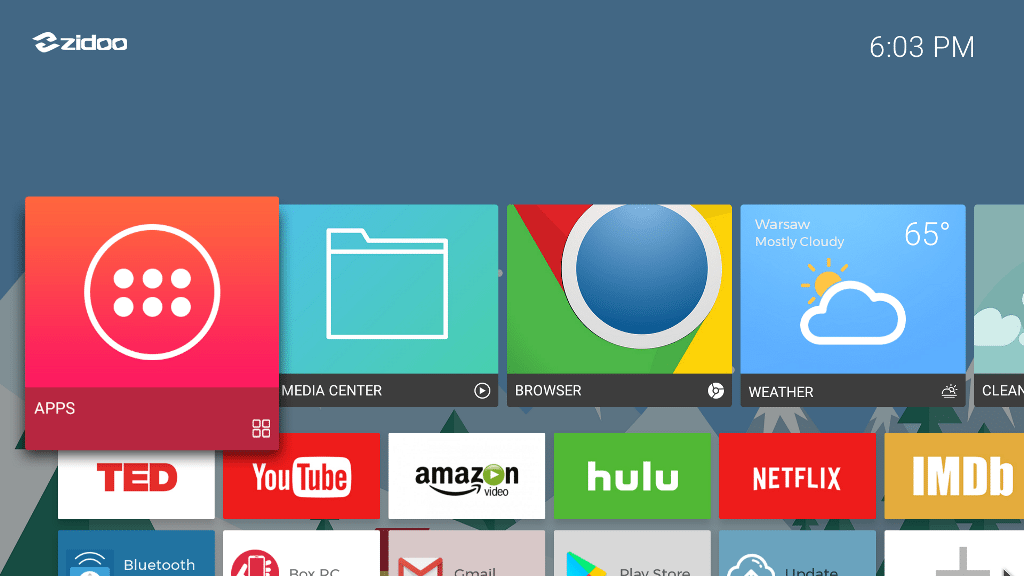 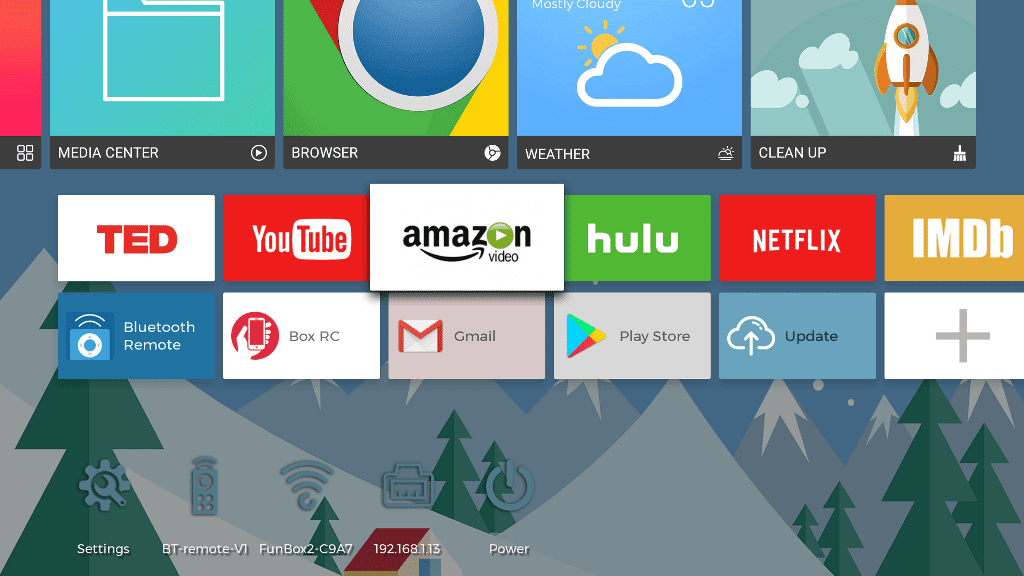 We can chose typical the resolution of FHD 1920×1080 (1080p 60Hz) but you can also adjust the preferred resolution ( also 4K 60Hz) or set the auto switch. Everything worked stable and very quickly without delays. We had no problem with Ethernet and WiFi connection to router and to Internet, but Wifi connection could be faster (hopefully the next firmware will be better). Ethernet: Download – 318.04Mbps Upload – 40.88Mbps, WiFi: Download – 3.72Mbps Upload – 4.49Mbps). In addition to the bluetooth remote control (from H6 PRO), we used a standard keyboard, mouse and two gamepads from iPega: iPega PG-9069 and iPega PG-9076.  Although the device in its specification has 16GB eMMC, storage has 10.22GB of data. TV Box  support also DLNA and Miracast, but the pre-installed miracast application does not work well. You can download other app from the Google Play store or install the application called CetusPlay (Install CetusPlay On TV/Box app on TV box and open, Install CetusPlay on a smartphone). ZIDOO H6 PRO has a pre-installed Netflix app (Netflix_v4.16.1 version). In the current firmware version (v1.0.10) H6 PRO supports Netflix HD (Big Plus!).  Also in this firmware version of the TV Box supports Youtube 2K 1440p (hopefully the target will be 4K 2160p). We have not seen any problems with local area network connections with other devices (network share). We also installed the latest Kodi 17.4. Below some screenshots.

The H6 PRO TV Box runs on the new Android 7.0 Nougat and the Linux Kernel version 3.10.65. TV Box comes with TV Box received from firmware v1.0.8b, which we updated via OTA to v1.0.10. TV Box is equipped with the new a SoC AllWinner H6 quad-core ARM Cortex-A53 processor up to 1.8GHz and GPU Mali-T720MP2, CPU speed between 480MHz and 1.8GHz. On the following screens, you can see exactly the components used and their specification (Information taken from the CPU-Z app).. Below screenshots. 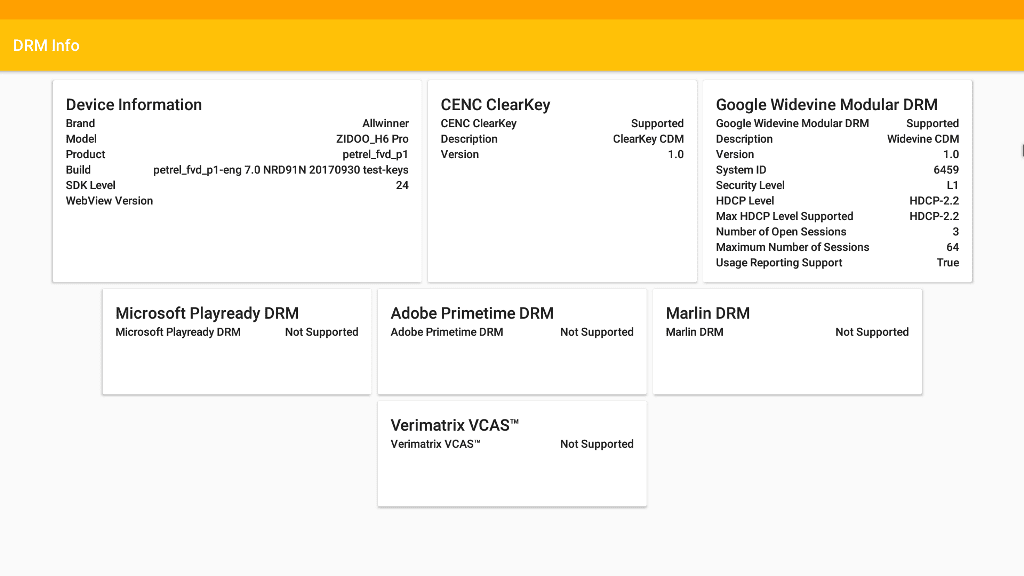 For testing, we use the AnTuTu Video Tester 3.0 app and AnTuTu Benchmark.  The result 938. The test showed problems with 2 video samples. 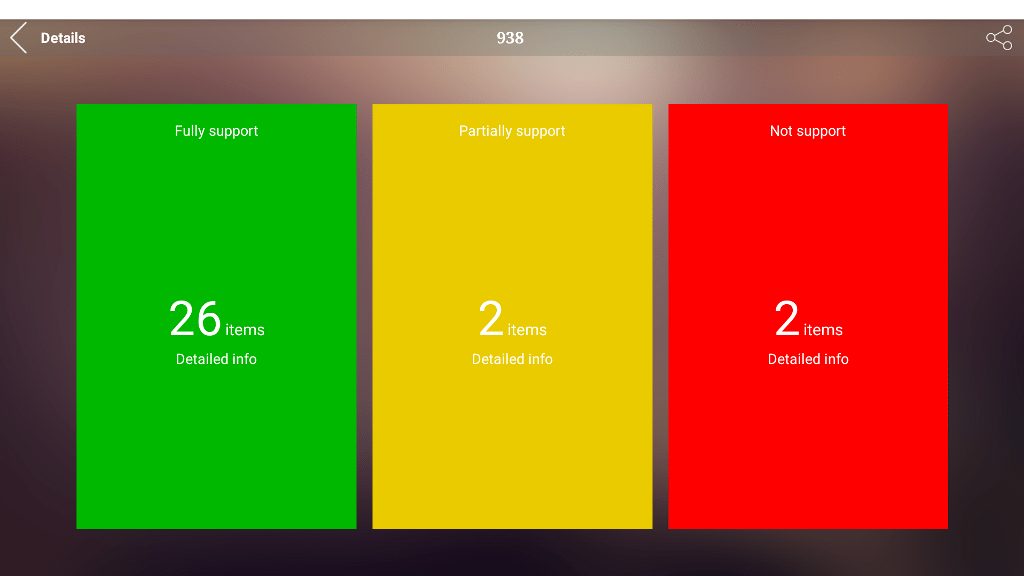 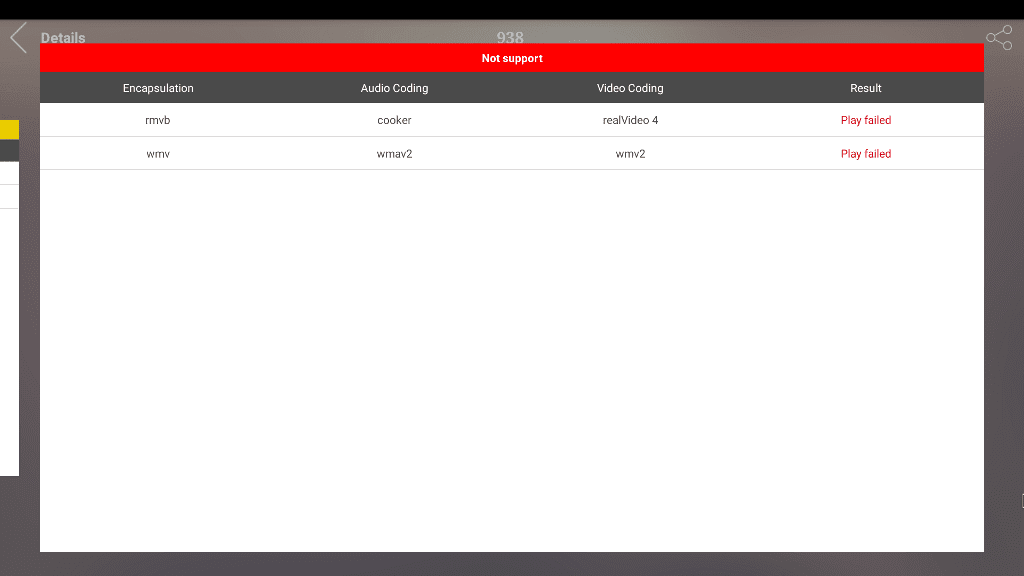 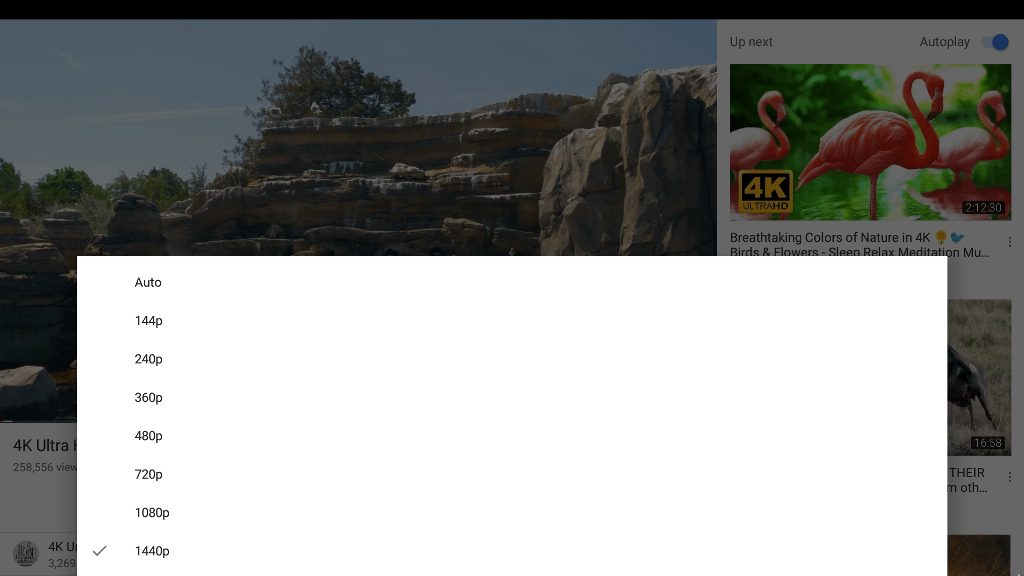 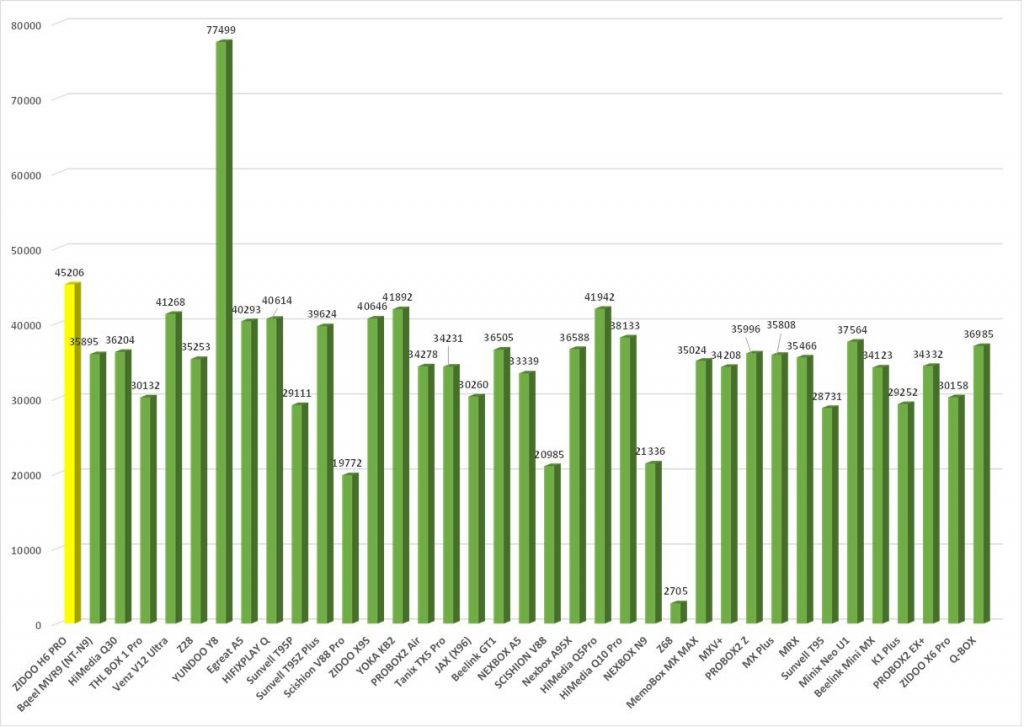 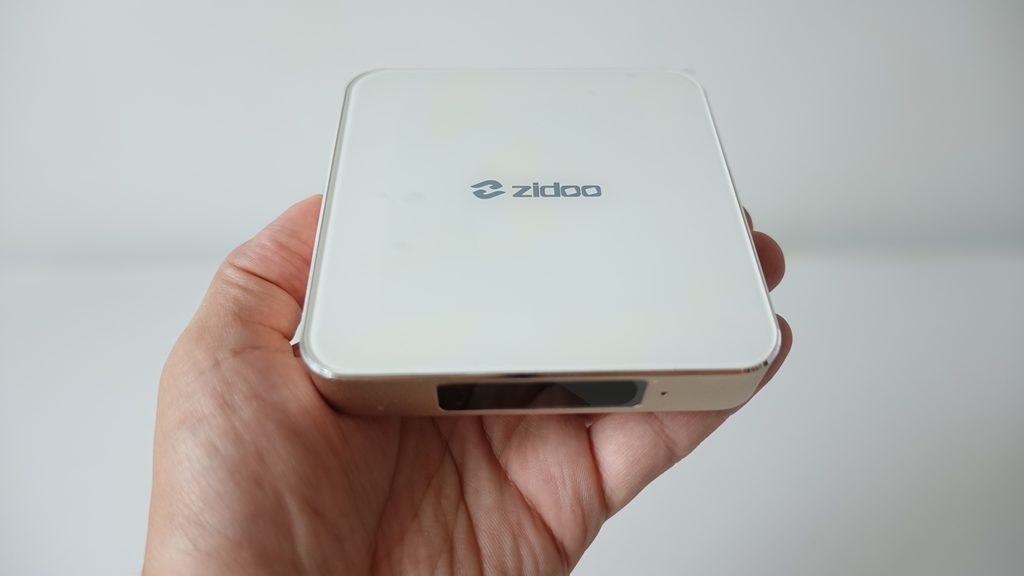 The ZIDOO H6 PRO is another successful TV Box from ZIDOO, although its firmware still requires optimization and improvements. First of all, the improvement requires WiFi (it is too slow). Big plus for ZIDOO team because it decided to use the new Allwinner H6 SoC in its new TV Box. The big plus also supports Netflix HD, Youtube 2K (hopefully soon Youtube 4K 2160p) and bluetooth remote control. If you are looking for a good TV Box that has many features, frequent updates also via OTA, then you should consider buying the ZIDOO H6 PRO. 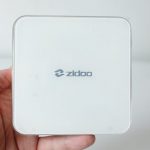