Sony confirmed the existence of the tablet Xperia Z4 Tablet, which will be equipped with a screen resolution of 2K. The device will be presented at the beginning of March.

Rumors about the tablet Xperia Z4 Tablet circulate the web for several months. Meanwhile, Sony confirmed that the device that was caught in the application Xperia Lounge. Information has already been removed, but the evidence for their confirmation you see below. 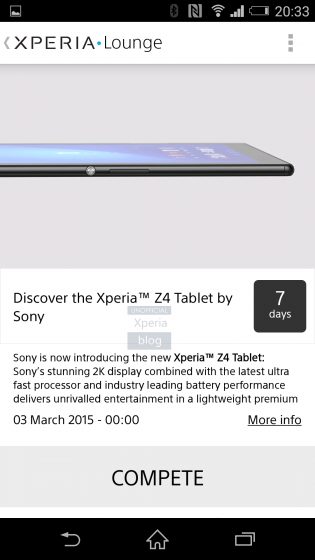 Full specs tablet has not been confirmed, but in the above screenshot OSD, we see that the Xperia Z4 Tablet is to have a screen with a resolution of 2K (probably 2560 x 1600 pixels), the new processor (probably will be a Qualcomm Snapdragon 810), and a very powerful battery. Photo tablet very reminds us of the Sony Xperia Z3 Tablet Compact design and so probably will not be major changes. We also see the date of 03 March, but the conference Sony is to take place the day before, and probably tablet will see on Monday.

From the information that was leaked to the web earlier that Xperia Z4 tablet is to have a 10.1-inch screen , 3 GB RAM, 8 megapixels webcam (!), camera 13 megapixels, and the whole is enclosed in a slim, waterproof housing.