As you know, recently we published a review TV Box equipped with a DVB-T2 tuner called MyGica ATV586. Today we want to introduce you to the features and user experience TV Box called WeTek Play from WeteK and also we’ll do a small comparison with the TV Box Mygica ATV586. WeTeK is one of Kodi and OpenELEC sponsors. One model WeTek Play we received for testing from VVETEK DOO (office in Slovenia) and I want to say thanks to WeTek for sending us a WeTek Play TV Box to review. Wetek Play is also available with DVB-S2 and ATSC tuner and without. 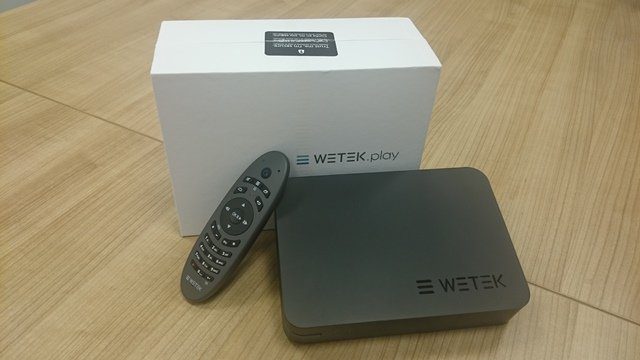 WeTeK Play is a an Android TV Box equipped with a Digital TV tuner. The heart of the TV Box is Amlogic AML8726-MX Dual core Cortex A9 @ 1.5GHz. WeTeK Play runs on Android 4.2.2. 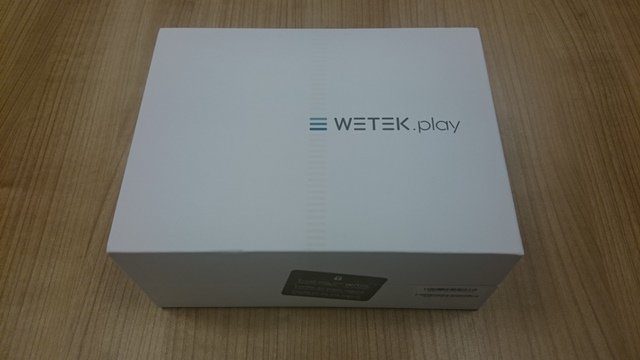 The following video from our YouTube channel where you can take a look at more WeTeK Play and bundled accessories.

WeTeK Play is made of matt and of good quality plastic. The design of the TV Box is simple (big plus) and well thought out. Very nicely they have been integrated LED information (Power, LAN, Wi-Fi). Wetek Play visually looks very aesthetically. At the front, we’ve got a power button, and the three LEDs for Power, LAN and Wi-Fi. At the rear: Antenna In, Antenna Out, 2x USB 2.0, Composite Video Out, 10/100 Ethernet, HDMI Out, Optical Audio out, RS-232 and DC In. On one side of the housing there is  USB port and the microSD card slot.

At the bottom of the device you will find information such as serial number and MAC address.

To a fully be able to enjoy the Android TV Box we have a remote control. Really, remote control for WeTeK play deserves a great recognition. It is small and fits comfortably in your hand. Under the index finger was placed mode button mouse that works very quickly and smoothly (It is comfortable for playing in Fruit Ninja)

On this small design were well-spaced buttons, there is also a button to perform screenshots. WeTeK also prepared WeControl app (available for download in the Google Play store) to handle WeTeK Play. The application works quickly and smoothly. The following screenshots from smartphone.

In WeTeK Play that I received was an older version of the software (kernel version from 2014) Therefore, before testing in an easy way the software has been updated to the latest version v1.1.5. The WeTek Play integrates an OTA (“over the air”) update feature.

Installing the update went without problems. With the latest version of the software we were able to begin testing for review.

The first boot requires passage by a simple configuration wizard. WeTeK Play has a resolution of 1280 x 720 pixels. While the main screen aesthetically pleasing and simple, with easy access to key functions.

In WeTek Play we will find some interesting features. The main function is primarily Digital TV and access to the DVB channels. By clicking on the TV icon we have a selection window where you can choose between the application WETEK.theater (DVB channels), and WE.cloud antenna (internet TV channels).

Features Digital TV do not differ from the standard that we could see in the DVB-T tuners. Channel search works without a problem. Digital TV receives no problems. No problem when switching between channels. Everything works fast, smoothly and stable. Below screenshots. 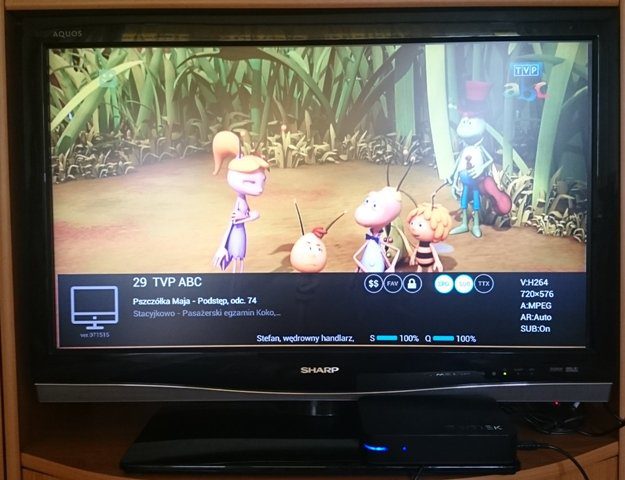 The added value to WeTek Play is the aforementioned application WE.cloud antenna that enables viewing Internet channels. The application works properly, but not all channels are loaded, and most of them are in Turkish. 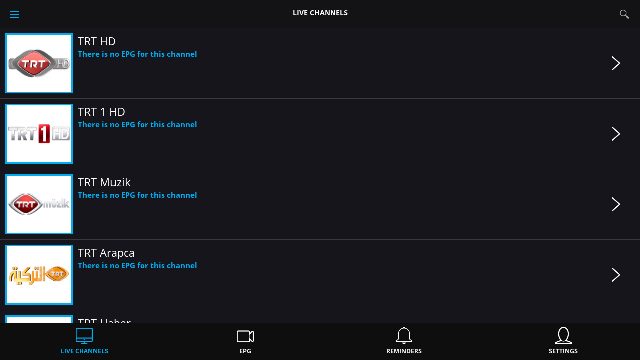 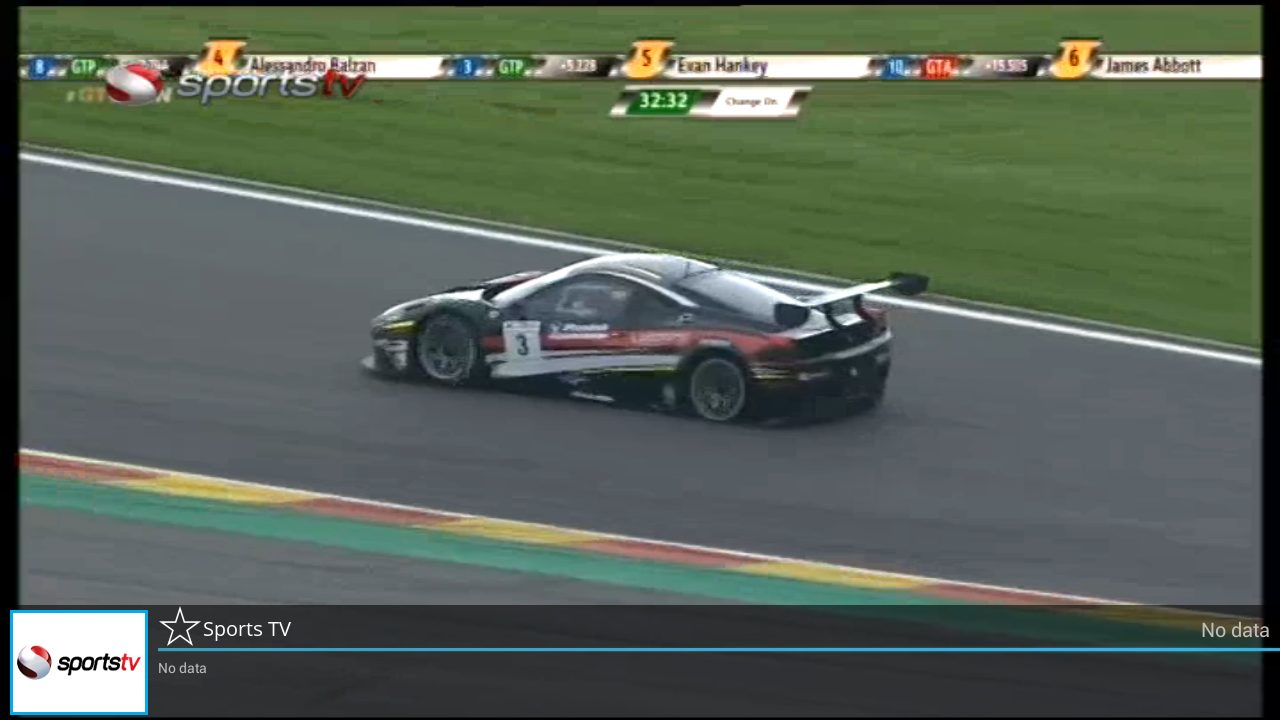 Navigating around the screen and switch on applications is smooth and without problems. Developers WeTek done a great job and very well optimized software that works with the support of dual core Amlogic processor. WeTek prepared the settings screen and services, android settings, own services, and weather which is displayed on the main screen as you saw. 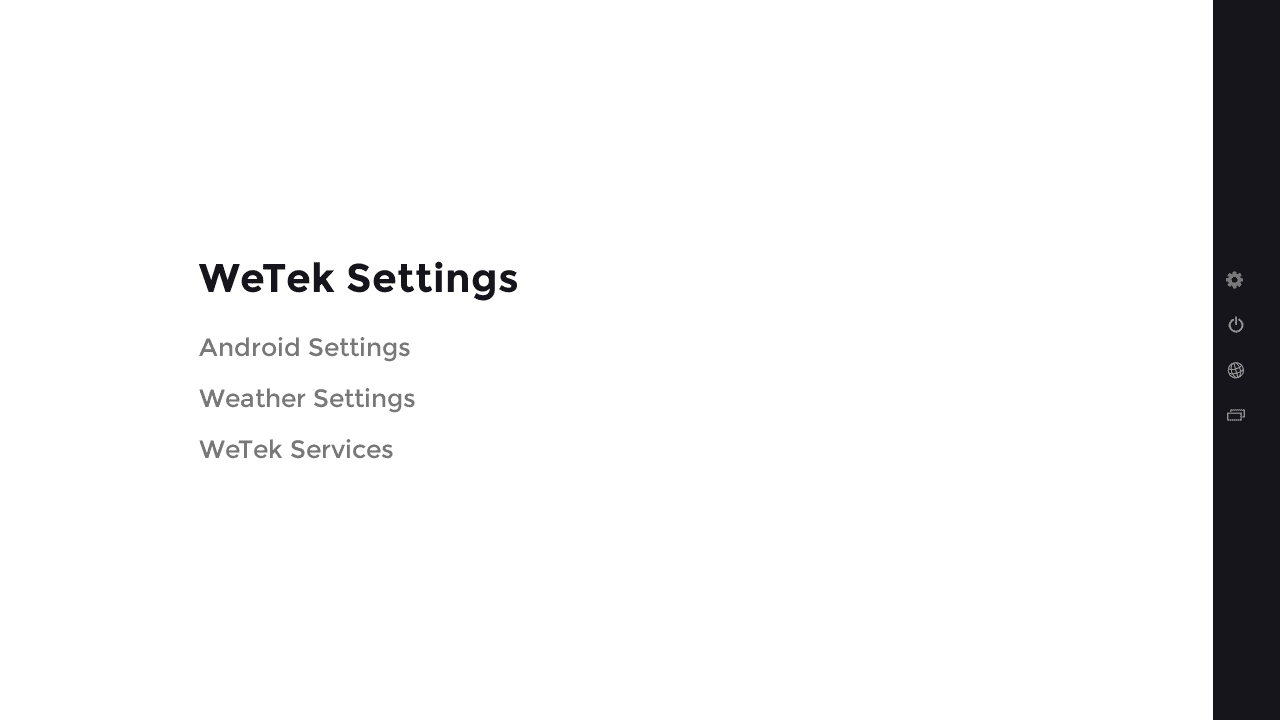 WeTeK Services refers to WeTek membership. When purchasing WeTeK Play included  membership card, with a unique number for activating the device and giving a pass to the area WeTek: access to WE.cloud antenna, WEbackup and services related to WeTek. A big plus for Wetek for your interest in the customer and the purchased TV Box.

From the home screen WeTeK launcher we have access also to applications, file manager and Kodi. 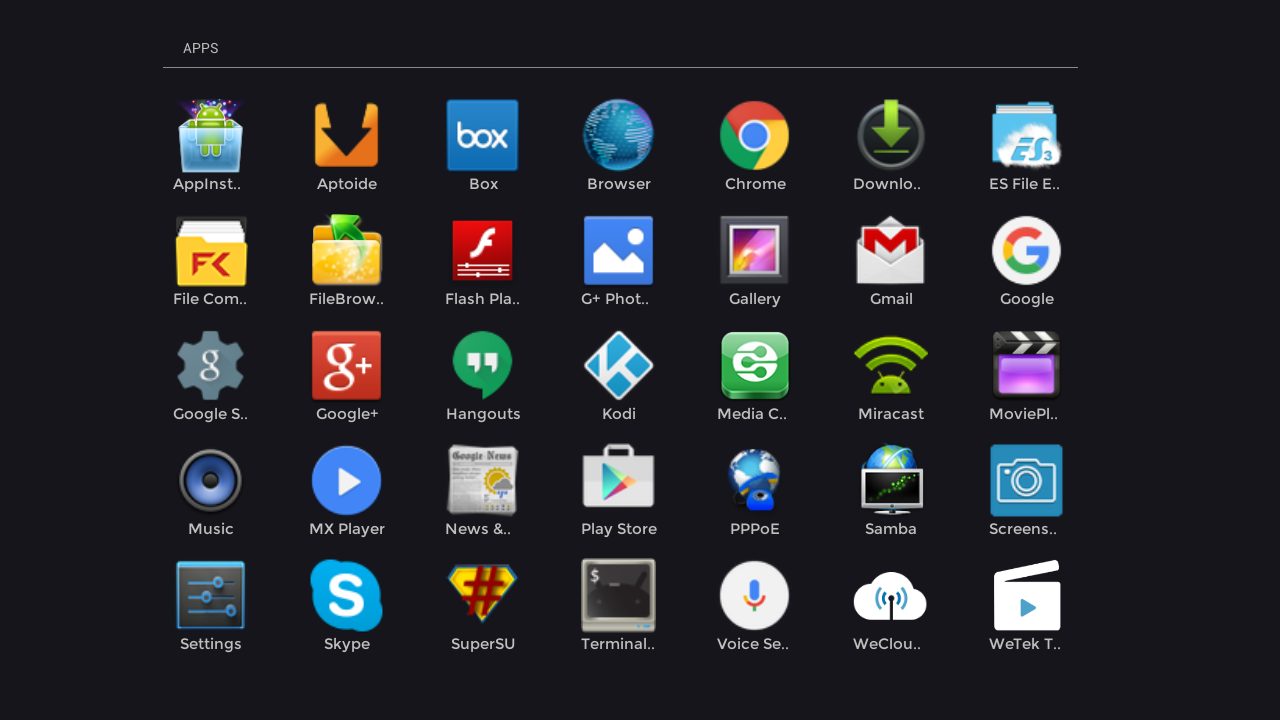 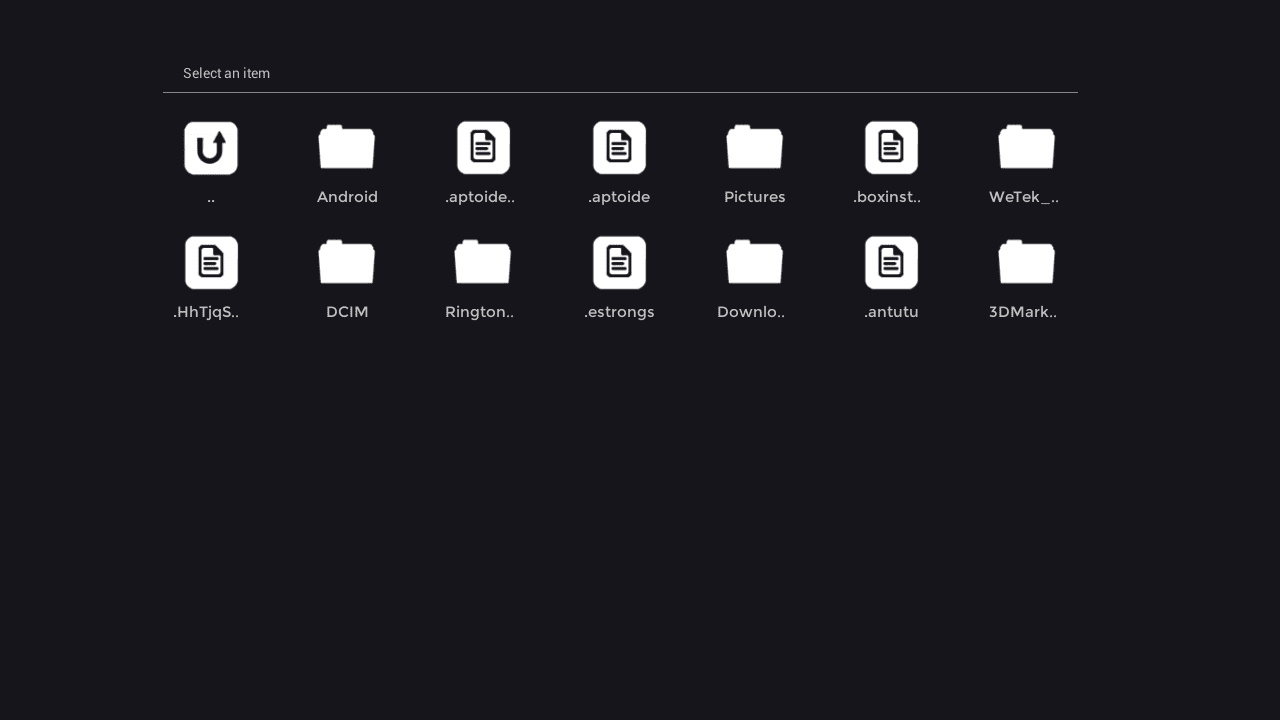 WeTeK Play has Kodi 14.2. It is the most popular version Kodi that can be found in TV Boxes. Below screenshots from Kodi.

On the WeTeK Play you can run simple games such as Beach Buggy Racing, Jetpack Joyride and Fruit Ninja. They work without a problem and stable. The problem occurs when controlling games using a standard mouse and keyboard, the lack of compatibility. Probably gamepad or controller solves the problem, but unfortunately I did not have and could not check. Very good and comfortable playing in Fruit Ninja to remote control from WeTeK. 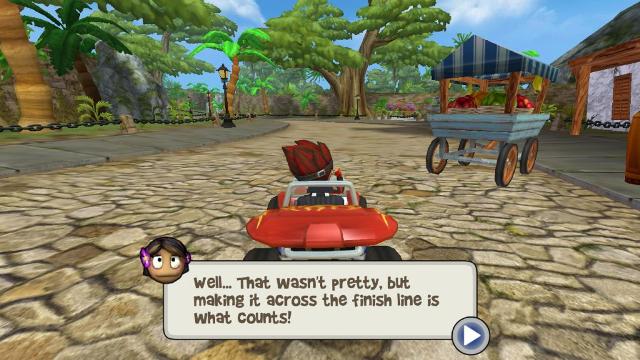 The WeTeK Play runs on the Android 4.2 Jelly Bean, namely version 4.2.2 and the Linux Kernel version 3.0.50-wetek (20150715). WeTeK Play is equipped with a an Amlogic AML8726-MX Dual core ARMv7 processor and GPU Mali-400 MP, CPU speed between 48 MHz and 1.5 GHz. On the following screens you can see exactly the components used and their specification (Information taken from the application AnTuTu Benchmark v5.7 (v 5.7.1 is not compatible) and CPU-Z).

For testing I used the app AnTuTu Benchmark 5.7.  AnTuTu Video Tester 3.0 is incompatible with WeTek Play. Unfortunately, failed to perform a test video the earlier version. During testing samples from Sorenson codec, the application AnTuTu Video Tester reboot itself (test got stuck at 73%, so I could not get a score) Of course, this has no impact on the user experience WeTek Play. Samples of the video were played on the MX Player and Kodi 14.2.

Video playback by Kodi (14.2) and MX Player runs smoothly and stable. WeTeK Play without problem seems plays movies with the resolution of 480p,720p and 1080p (24fps, 30fps, 60fps) and with various codecs video such as H.264, MPEG2, MPEG4, RMVB and audio – DTS and AC3. Also I tested several video formats – AVI, MKV, MP4 (typical formats in which it holds the majority of films) and also videos was played without any problems. 4K videos and H.265 does not play, because are not supported by Amlogic AML8726-MX.

The WeTek Play scored 14665 on AnTuTu Benchmark 5.7. Below a lot of screenshots of AnTuTu and GeekBech 3.

The main difference between WeTeK Play and MyGica ATV586 it is CPU, GPU and Resolution. WeTek Play unfortunately has a resolution of 1280*720. In Mygica ATV586 you can achieve “true” 1080p output. Comparing video playback, slightly better in Mygica. Compared to MyGica, WeTeK operate on older Android. When it comes to the appearance of the interface, it is matter of personal taste. Both devices have the same features DVB – EPG, PVR, Parental control etc. In favor WeTeK Play, affects membership WeTek, We.Cloud antenna and access to the internet TV and an application for remote control – WeControl. Comparing the price – WeTeK Play costs 145.51USD (€129.00), Mygica ATV586 costs 120.21USD.

WeTeK Play is a TV Box equipped with a Digital TV Tuner. Very nicely made Android TV Box allows in addition to the use of digital TV channels, access to applications, browser, Kodi, internet TV channels and more. WeTek Play has a very user-friendly remote control, which you can play, for example, Angry Birds or Fruit Ninja. Simple UI is easy to navigate and provides quick access to favorite features and applications. WeTeK works quickly, despite dual core processor. WeTek Play is a media player that is enough for playing the most commonly used video formats up to 1080p. Additionally, if you get tired of Android you can easily change the software on OpenELEC, whose development  supports the WeTeK company. Also worth mentioning the extensive WeTeK forum, where you will find all the necessary information and support. If you are looking for devices that must have a Digital TV tuner, WeTek Play is worthy of consideration.