Samsung Electronics officially announced a new processor for mobile devices, which is based on 64-bit architecture, ARMv8 – Exynos 8 Octa 8890, about which rumors were circulating on the web for a long time. The new Samsung processor  is an 8–core unit. Let’s look at the arrangement Exynos 8890 up close. 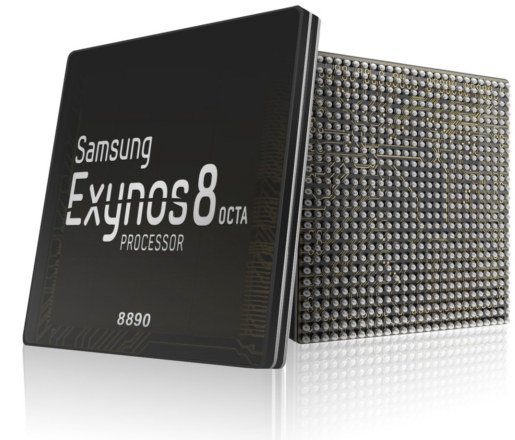 Even earlier there were rumors that Samsung intended this year to start mass production of a new processor for mobile devices with the Exynos series. And it will happen. Samsung Electronics officially announced the Exynos 8 Octa 8890 chip, whose mass production will begin later this year.

In contrast to Qualcomm, Samsung Electronics placed on an 8-core. Exynos 8 Octa 8890 has 4 cores based on 64-bit architecture, ARMv8, which will be used for more demanding calculations. Unfortunately, their details, and even the name has not been disclosed. So we do not know with which clock will work these cores. Although certainly greater than 2 GHz. For the less demanding computations will use quad-core ARM Cortex-A53. Samsung boasts that Exynos 8890 supports heterogeneous processing. This means that, if necessary, will be active cores. In order to ensure the best performance unit.

Exynos 8 Octa 8890 will be manufactured at the 14 nm process technology FinFET, and thus the same as Exynos 7420. Nevertheless, the new processor will have to consume less energy. Samsung boasts that demand for energy has been successfully reduced by 10% (of course, relative to the Exynos 7420). In contrast, the performance of the new system to be 30% better than that which is the last devices from Samsung.

For the calculation of the graphic in Exynos 8890 is to correspond to Mali T880 GPU, so the final layout of the ARM, which was announced earlier this year. More about it read in a separate article. According to information disclosed by Samsung Electronics also it shows that the Exynos 8890 will be supported by LTE modem cat. 12/13, data transfer during download speeds of up to 600 Mbps. In contrast to send data will be carried out at up to 150 Mbps. Similar LTE modem’s in Snapdragon 820.