Another day and another new revelations (prices) about new TV Boxes with Amlogic S912. If any of you missed the information that appeared TV boxes with S912 in a strong specification, we want to tell you that the TV boxes with S912 SoC and 3GB RAM are now available for presale, and are available at attractive prices. R-BOX Pro is just one of the TV Boxes equipped with Amlogic S912 and 3GB of RAM. 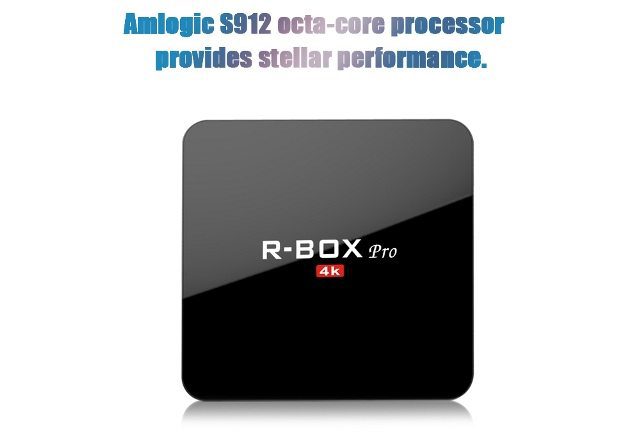 What is interesting TV Box has a two-color LED backlight (blue and red.) Like the rest of the TV boxes of Soc S912, R-BOX Pro runs on Android 6.0 Marshamllow. More can be found in the specification below.

The R-BOX Pro 4K UHD TV Box will be shipped with a standard accesories: IR remote control, HDMI cable, power adapter, user manual. R-BOX Pro with 3GB RAM and Amlogic S912 is now one of the strongest specifications that can be found in the Android TV Box. As we wrote earlier, the R-BOX Pro with 3GB of RAM and 16GB of flash is available for $69.99 (coupon code: GBRP3), and in the version of 2GB of RAM and 16GB of flash for $63.99 (coupon code: GBRP2).