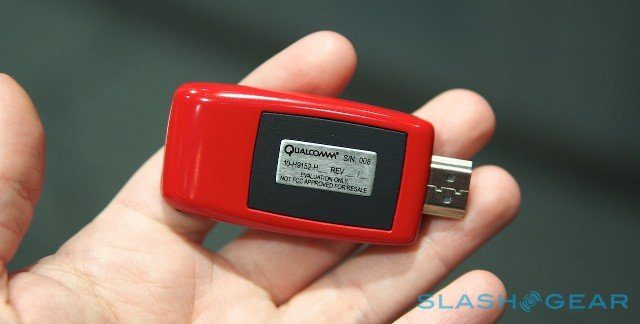 New HDMI Stick from Qualcomm is a 4K Streaming Adapter. The chip maker will license the design and technology of the device to manufacturers who are interested in launching a Chromecast like media streaming stick.

It features a Snapdragon 800 chipset inside and also supports LTE broadcast. The ability to stream 4K content could be a massive advantage Qualcomm has over any of the competitors that are available in the market today.

According to SlashGear: There’s also a full copy of Android. Exactly what you see when you plug the adapter in will y depend on the requirements of the eventual manufacturers, Qualcomm explained. Some, for instance, may want nothing more than a “now check your phone or tablet to play content” message on-screen, leaving full control – Chromecast “casting” style – to the remote mobile device.

We expect that more information and details will be distributed during the MWC 2015 next month.