Recently you could read a review of two TV Boxes equipped with RK3368 (Emish X800 and ZIDOO X6 Pro). Today we want to introduce you to review TV Box equipped with SoC Amlogic S812 called PROBOX2 EX+ with a dedicated remote controller called PROBOX2 Remote+. EX+ TV Box – Extreme Media player  is a refreshed version of the PROBOX2 EX TV Box model. In this review we want to bring you the the features and impressions of using PROBOX2 EX+ TV Box with Remote+. Is the TV Box is working properly or can easily watch videos in 4K (just like TV Boxes with RK3368), about this In the next part review. 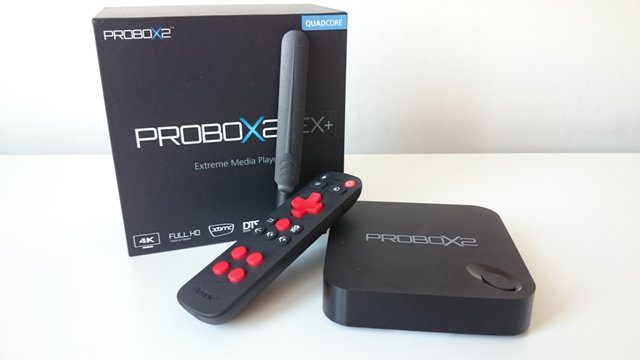 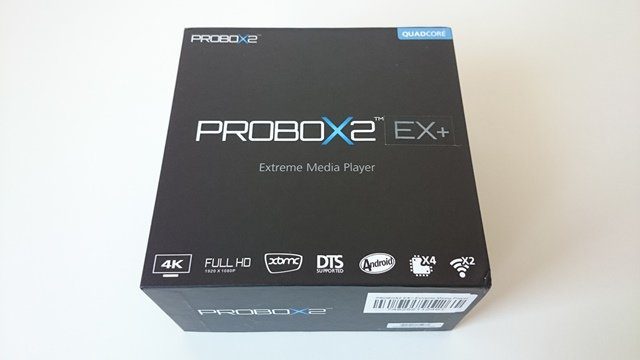 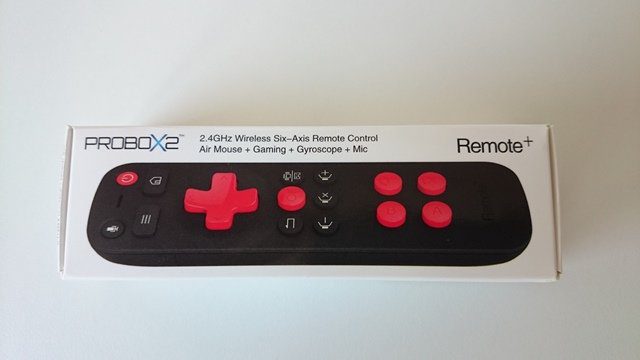 The following video from our YouTube channel where you can take a look at more PROBOX2 EX+ with Remote+ and bundled accessories.

The housing PROBOX2 EX+ is made of good quality not shiny plastic. At the top is the POWER button The front panel has IR receiver and power LED. On one side there are two USB 2.0 ports, OTG port and micro SD card slot. On the rear panel are: 5V DC jack 3.5 mm, AV port, RJ45 Gigabit Ethernet port, HDMI port and an optical S / PDIF port.

At the bottom of the device you see warm air outlet.

Booting Android to the “home screen” takes about 01:04.5 seconds (to long!). “Home screen” launcher PROBOX2 EX+ looks nice and very, very simple and easy to use. But it also is available on PROBOX2 EX+ more colorful launcher, it all depends on your preferences. In addition to the remote control I used the standard keyboard and mouse, Remote+ and Xiaomi gamepad.

The device worked in the resolution of FHD 1920×1080 (1080p 60Hz) but you can also adjust the preferred resolution (also 4K) or set the auto mode.  On the launcher we have access to the most important features: settings, apps, browser, file manager, kodi etc. PROBOX2 EX+ has also DLNA, Miracast and Airplay. It also has a 16GB eMMC for data (a big plus). I had no problem with Ethernet and WiFi connection to my router. Below a few screenshots.

PROBOX2 EX+ is another TV Box which has KODI Isengard with additions (more precisely KODI 15.2–RC1). Below screenshots from Kodi.

On PROBOX2 EX+ you can play without a problem just connect gamepad. I used Xiaomi gamepad. The combination of EX+ TV Box with Xiaomi gamepad is great fun. Beach Buggy Racing and Jetpack Joyride runs reliably and without problem, even with high resolution works trouble free also I was able to run Asphalt 8: Airborne which also worked without problems. The use of gaming Remote+ is also pleasant and mainly works in games: Fruit Ninja and Jetpack Joyride, but in the Asphalt and Beach Buggy had problems with control.

The PROBOX2 EX+ runs on the Android 5.1 Lollipop, namely version 5.5.1 and the Linux Kernel version 3.10.33. EX+ TV Box is equipped with a SoC Amlogic S812 Quad Core Cortex A9 processor and GPU Octa Core Mali-450, CPU speed between 24 MHz and 2 GHz. On the following screens you can see exactly the components used and their specification (Information taken from the application AnTuTu Benchmark v5.7.1, CPU-Z and AIDA64).

For testing I use the app AnTuTu Video Tester 3.0 and AnTuTu Benchmark 5.7.1. The following screenshots from the video test. The result 1024! (nice). PROBOX2 EX+ is the first of the tested TV Boxes that did not have not supported codecs.

Video playback by Kodi Isengard (15.2 RC1) and MX Player runs smoothly and stable.PROBOX2 EX+ TV Box without problem seems plays movies with the resolution of 480p,720p and 1080p (24fps, 30fps, 60fps) and also 4K (small problems with 60fps) with various codecs video such as H.264, H.265, MPEG2, MPEG4, RMVB and audio – DTS and AC3. Also I tested several video formats – AVI, MKV, MP4 (typical formats in which it holds the majority of films) and also videos was played without any problems. The EX+ tested 4K video play without any major problems. In a one samples of the video were minimal jumping frames. The following table compares Kodi and MX Player for some video samples.

The EX+ TV Box scored 34332 on AnTuTu Benchmark 5.7. Below a lot of screenshots of AnTuTu and GeekBech 3. 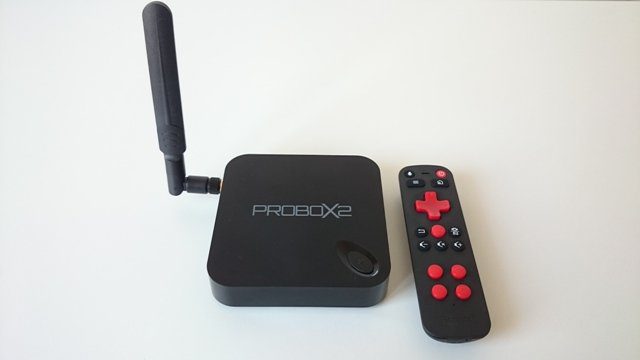 PROBOX2 EX+ is a small, well and aesthetically made TV Box. As we said at the beginning of his heart is Amlogic S812 Quad Core Cortex A9 processor which supports 4K@30fps H.265/H.264 hardware decoding, FHD 1080p @30fps hardware encoding, supports H.264. Plays typical video content in 1080p and copes well with the video in 4K. PROBOX EX+ has an easy to use UI which provides quick and intuitive access to key features. EX+ in combination with Remote+ gives you pleasure and ease of use. PROBOX2 team equipping EX+ in Android 5.1 took care of optimizing the device. EX+ TV Box works well in games, but also web browsing and watching videos. It’s really good equipment to build a home entertainment center. As you can see in the reviews, benchmarks PROBOX EX+ look impressive. Therefore, if you are looking for the TV Box with good performance, good support multiple codecs and 4K playback to TV box for you. We recommend PROBOX2 EX+.