Recently we wrote about a new firmware for MINIX Neo U1, and todayvwe want to introduce to you his review. In this review we want to bring you the the features and impressions of using MINIX Neo U1 and MINIX NEO A2 Lite and we want to answer the questions: Is the NEO U1 can play without any problem the video in 4K?  How works A2 Lite with Neo U1? and Is it worth buying this TV Box. We invite you to read.

I want to say thanks to MINIX company for sending us a MINIX Neo U1 with MINIX A2 Lite to review. If someone has not yet decided or are planning to buy, MINIX NEO U1 media HUB is available on Geekbuying for $129.90 and $149.90 with MINIX NEO A2 Lite Air Mouse, on Amazon and Gearbest. NEO A2 Lite air mouse is also sold separately for $29.99. 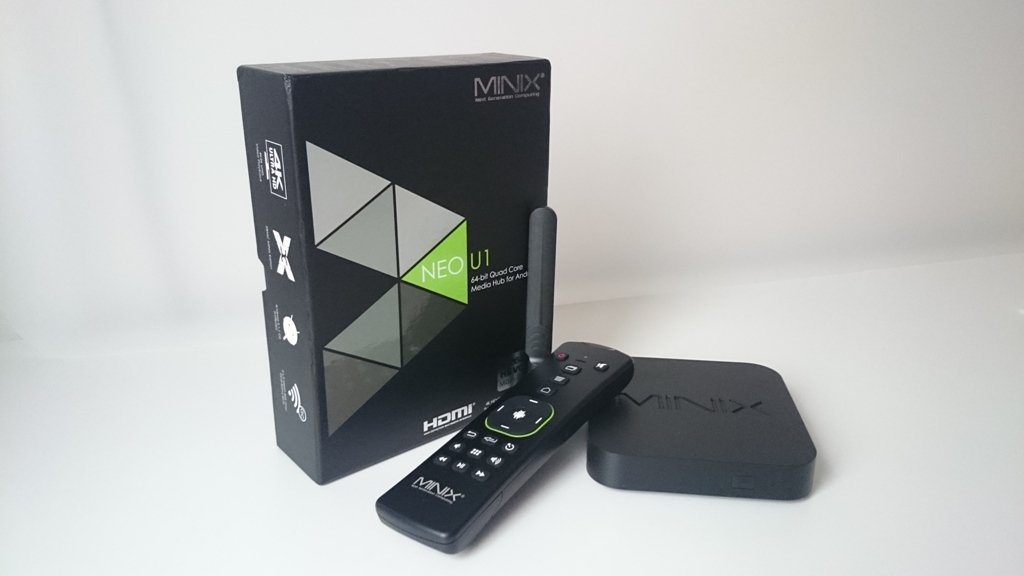 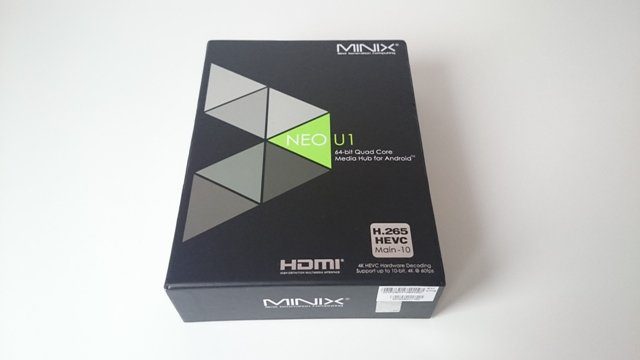 MINIX NEO A2 Lite is a combination of air mouse and QWERTY keyboard. It looks very interesting compared to typical remote control and other air mouse with keyboard. Main Features:

The following video from our YouTube channel where you can take a look at more MINIX Neo U1 with A2 Lite and bundled accessories.

The MINIX NEO U1 case is made of good quality not shiny plastic. On the front panel there is an IR receiver with power LED. On one side is Power button, 3x USB 2.0 host ports, a micro SD slot, a Kensington lock and a micro USB OTG port. On the rear panel is 2x 3.5 mm jacks for speakers and microphone, HDMI 2.0 port, optical S/PDIF, Gigabit Ethernet and DC jack. On another side is WiFi antenna connector.

At the bottom of the device you see recovery button and in the four corners of the small rubber to prevent slipping device. Below also remote control.

The remote control included with the MINIX Neo U1 looks unusually and works without a problem, allowing access to all the features we need. That is why we want to focus more on MINIX Neo Lite A2 which received together with the Neo U1. The combination of air mouse with a QWERTY keyboard is a great solution. We have not had the opportunity to test other models of this type of equipment, while taking into account quality, fast and comfortable handling A2 Lite, combined with Neo U1 is really enjoyable entertainment. Location of controls and access to functions is convenient.

Given the built-in keyboard, which can be used for browsing the web, writing emails or comments on social networks, MINIX A2 Lite is a very handy device which really comfortably controlled from the couch. A2 Lite may also be used with other models TV Boxes (which of course do in the next review), and in combination with Neo U1 works perfectly (Big Plus!).

Booting Android to the “home screen” takes about 00:30.2 seconds (very good result – faster than Beelink Mini MX and K1 Plus). “Home screen” launcher MINIX Metro looks very simple, easy to use and familiar. In addition to the remote control, and MINIX A2 Lite, I used a standard keyboard and mouse, PROBOX2 Remote+ and Xiaomi gamepad.

In the Neo U1 of course, we also have to choose from more conventional launcher. Below screenshots.

MINIX Neo U1 Box can additionally be controlled using the application on the smartphone. Download here – U1_remote.apk. The application works with TV boxes  based on SoC Amlogic: S905, S812 and S805. This is the same application about which we wrote at the Beelink Mini MX review (RC_Client_Amlogic). Below screenshots of applications from the smartphone.

The device worked in the resolution of FHD 1920×1080 (1080p 60Hz) but you can also adjust the preferred resolution (also 4K) or set the auto mode.  Launcher includes icons in different sized, enabling available for the most important functions, inter alia: Videos, Kodi, Music, Games, Internet, Online streaming, Screencasting, Social, Settings and also as at the top of the screen icons to indicate on/off for WiFi, Ethernet, Bluetooth and VPN status. From the bottom using the + sign (plus sign), you can add to your home screen your preferred application. On the right side we have access to: Time, File explorer, All apps, App market, All tasks killer. The MINIX Neo U1 has also DLNA, Miracast and Airplay. I had no problem with Ethernet and WiFi connection to my router. In the specification Neo U1 is the information that has internal memory of 16GB but there is only 12GB. The remote control and A2 Lite works without a problem also with PROBOX2 Remote+ there were no problems, Xiaomi gamepad as always worked greate. Everything worked quickly without delays. Below a few screenshots.

Mini MX is another TV Box which has KODI Jarvis (more precisely KODI 16.0 Jarvis Aplha4). However unnecessarily manufacturer decided to add a new Kodi Jarvis, which is still in the testing phase. The final version of Kodi Isengard is currently a sufficient and functioning properly. MINIX also prepared its own application for media playback XBMC for MINIX version 15.3 (MINIX_XBMC_20151230.apk), is a converted version of Kodi by a MINIX team, which can be used instead of the standard version KODI. Below Kodi and MINIX XBMC 15.3 screenshots.

On MINIX Neo U1 you can play without a problem just connect gamepad. I used Xiaomi gamepad. The combination of Neo U1 with Xiaomi gamepad is great fun. Beach Buggy Racing and Jetpack Joyride runs reliably and without problem, even with high resolution works trouble free also I was able to run Asphalt 8: Airborne which also worked without problems. PROBOX2 Remote+ , A2 Lite works well in combination with the Neo U1 TV Box, and copes well with the game Fruit Ninja and Jetpack Joyride.

The MINIX Neo U1 TV Box runs on the Android 5.1 Lollipop, namely version 5.1.1 and the Linux Kernel version 3.14.29. After checking availability of an update in “System Update” it turned out to be the new firmware is available via OTA update (Big Plus!) The device had installed the firmware Build number – U1 FW003 20151210. After updating firmware the device has received the Build number U1 FW004 20151228 (more info here).

TV Box is equipped in the recently very popular a SoC Amlogic S905 Quad core 64-bit  Cortex A53 Up to 2.0GHz processor and GPU Mali-450, CPU speed between 100 MHz and 2.02 GHz. On the following screens you can see exactly the components used and their specification (Information taken from the applications: new AnTuTu Benchmark v6.0, CPU-Z and AIDA64). Unfortunately, Amlogic S905 is not yet recognized in the applications only detected ARM Cortex–A53. Also, the model device is detected as NEO-U1 (p200_2G) and board NEO-U1.

After using the DRM info (app) we know that Neo U1 supports Google Widevine Moudlar DRM, but unfortunately does not support Microsoft Playready DRM.

For testing I use the AnTuTu Video Tester 3.0 app and AnTuTu Benchmark 6.0. The following screenshots from the video test. The result 899 , better than K1 Plus TV Box (result 886) but worse than Beelink Mini MX (result 920). Also worthy of note is that MINIX Neo U1 did not have not supported codecs.

Video playback by Kodi Jarvis (16.0 Alpha 4), XBMC for MINIX (15.3) and MX Player runs smoothly and stable. Neo U1 TV Box without problem seems plays movies with the resolution of 480p,720p and1080p(24fps, 30fps, 60fps) and also 4K (60fps) with various codecs video such as H.264, H.265, MPEG2, MPEG4, RMVB and audio – DTS and AC3. Also I tested several video formats – AVI, MKV, MP4 (typical formats in which it holds the majority of films) and also videos was played without any problems. The tested Neo U1 plays video files in 4K (also 60fps) without any major problems. The following table compares Kodi, XBMC MINIX and MX Player for some video samples. Also copes well with playing the video on YouTube.

The MINIX Neo U1 is a very well and aesthetically made TV Box, with great attention manufacturer of quality workmanship and materials. As we said at the beginning of his heart is a new Amlogic S905 Quad core 64-bit  Cortex A53 Up to 2.0GHz processor which supports UHD 4K@60fps HW decoding, multiple formats including H.265 10-bit, H.264, AVS+ and also FHD 1080p @60fps HW encoding, H.264. Plays typical video content in 1080p and copes well with the video in 4K (also with 60fps). Noteworthy is easy to update via OTA update and the frequency of updates provided by the manufacturer. NEO U1 Media HUB has nice and an easy to use UI which provides quick and intuitive access to key features. Neo U1 stands out in comparison to the competition and existing TV Boxes of S905 chipset which we tested. It has 2GB of RAM. It’s really fast and stable running TV Box. The MINIX Neo U1 TV Box works well in simple games, but also web browsing and watching videos. It’s really good equipment with big potential to build a home entertainment center. The MINIX Neo U1 in combination with MINIX A2 Lite gives you pleasure and ease of use. Of course, TV Box require improvements, but as in most of the available TV Boxes, always something to find. MINIX NEO U1 media HUB is available on Geekbuying for $129.90 and $149.90 with MINIX NEO A2 Lite Air Mouse, on Amazon and Gearbest. Price Neo U1 compared to TV Boxes in a similar configuration (but older chipsets) and attached accessories, it is not excessive, which is why it is a good value for money. Once again I want to say thanks to MINIX for sending us a Neo U1 TV Box with A2 Lite. Is it worth buying? YES !. It is now one of the best TV Boxes equipped with Amlogic S905, having a very good configuration, vendor support (updates and firmware update via OTA), a stable and fast work and excellent support for various multimedia. We recommend a MINIX Neo U1 and MINIX A2 Lite.