As we wrote in the subject of the review – How to turn your TV into a “true” Smart TV, the answer is simple, using MECOOL NOW, of course. Interestingly, the Android TV streaming device can turn your TV (old TV) into Smart TV. On the other hand, MECOOL NOW (KA2) device introduces a higher level by enabling, in addition to streaming features, also video calls via Google Duo and ZOOM app. As is the case with some already Smart TVs models. In addition, the device is based on the latest Amlogic S905X4 SoC supporting 4K AV1 decoding.

Is it worth buying MECOOL NOW? we encourage you to read our impressions, which you will find in our MECOOL NOW review.

I want to say thanks to the MECOOL brand (www.mecoolonline.com) for sending us a MECOOL NOW (KA2) device to review.

MECOOL Now Google Certified Video Calling on Your TV device you can buy directly from MECOOL brand store for $117 after coupon: ANDROIDTVBOX (10%OFF) or MECOOLNOW10

If you are looking for an alternative, certified device in Android TV Box format, be sure to check out MECOOL KM2 (which supports Netflix 4K streaming), now for $71.10 after coupon: ANDROIDTVBOX (10%OFF) or coupon: FBKM2

BTW, You can use our ANDROIDTVBOX coupon by purchasing other MECOOL’s streaming devices.

The following video from our YouTube channel where you can take a look at more MECOOL NOW details and bundled accessories.

On the front panel we can find: Power/standby button, RCU IR, Dial/answer button (open Duo app when there is an incoming call or use it in Duo to Dial/answer video calls with one click), Microphones, Status light, Camera light (turn on the camera –  no light, when using the camera – green light, turn off camera – red light, HD camera, and camera privacy cover.

At the top of the device is located speaker and microphone switch. There is a USB 2.0 OTG & USB3.0 port on the right side of the device

At the bottom, we find the following interfaces: DC IN, tripod mounting hole, HDMI IN, HDMI Out, Ethernet RJ45 port / LAN 10/100MBps, and device bracket (used to fix the device on top of the TV.

Besides, the device comes with a Bluetooth voice remote (that supports voice commands via Google Assistant ) with three hotkeys Google Duo, Youtube, and TikTok. Of course, the remote control has the Google Assistant button. More photos below.

MECOOL NOW can be used in two ways. The best-looking solution is placed on top of a TV. However, the most practical is to install the device on a tripod (the device is equipped with the 1/4″-20 standard). Then we can easily set the distance from the camera. Tripod stand you can buy at MECOOL store, here.

MECOOL NOW runs on Android TV 10, so the operation on Android TV is known to most of you, or you could read about it in our previous reviews. Working with the device is child’s play from the moment of commissioning and configuration to everyday use.

In addition to the Bluetooth remote control with voice features (which works great), we used a gamepad from an iPega called iPega PG-9076.  That’s right, through the MECOOL NOW you can also play simple games (Beach Buggy Racing, Asphalt 8, etc) available on Google Play Store for Android TV (but the number of applications for Android TV OS is limited). We also installed Kodi 19.0. Additionally, MECOOL NOW comes with an IPTV application pre-installed. For testing, we used the free of 5000+ publicly available IPTV channels from all over the world .m3u (Github source here). If you need to control the TV Box through a smartphone, you can use the Android TV Remote Control app.

In addition, the device has a pre-installed TikTok application (the voice remote has also a dedicated button), which, in combination with the built-in camera, allows the same operation as on a smartphone. Besides, you can also watch video content from TikTok.

MECOOL NOW more details from the use

MECOOL’s streaming device built-in camera is Google Certified device and comes with built-in Chromecast support (you can stream your favorite entertainment and apps from your phone, tablet, or laptop).

As for video streaming, MECOOL NOW (KA2) plays Youtube, Google Play Movies up to 4K 2160p without a problem, also with AV1 codec. HBOGo, Prime Video, also up to 4K 2160p HDR. Supports streaming 4K HDR10+ for Disney+. Unfortunately, the device is not certified by Netflix, Besides, we also failed to install the application as mentioned at the beginning.

In addition to streaming, the main feature of MECOOL NOW is the support for video calls. The device can handle it without any problems. You can make calls via Google Duo (also voice remote has dedicated buttons for the Google Duo application) and ZOOM, as well as receive incoming calls. Below you will find a sample of Video calls via Google Duo and ZOOM. We were unable to install Microsoft Teams.

Below you will also find a lot of screenshots.

NOW (KA2) runs on Android TV 10.0, Kernel version 4.9.180, and supports OTA updates. The device uses OTA firmware version V4.20210115. As we mentioned, the MECOOL NOW is equipped with a new Amlogic S905X4 Quad-core ARM Cortex-A55 CPU @ processor up to 2.0GHz and GPU Mali-G31MP2, CPU speed between 100MHz and 2.0GHz. Below is a screenshot of DRM info (Supports Google Widevine L1/Playready). Below screenshots.

For testing, we used only the 3D Mark app.

Playback by Kodi 19.0 “Matrix” runs almost smoothly and stable. The streaming device without problem seems to play movies with the resolution of 480p,720p, and 1080p (24fps, 30fps, 60fps) and also 4K (60fps) with various codecs videos such as H.264, H.265, MPEG2, MPEG4, RMVB, and audio – DTS and AC3. Dolby Digital 5.1 passthrough worked fine via HDMI.  Also, we tested several video formats – AVI, MKV, MP4, ISO (typical formats in which it holds the majority of movies), which also played fine. The tested sample with the AV1 codec also works smoothly (but via via pre-installed player).

MECOOL NOW is primarily a 2-in-1 device. In addition to its streaming function, it also enables video calls via Google Duo and ZOOM. On MECOOL NOW, just like through a smartphone, we can use video calls, but on a much larger screen. In addition, it is a great device for video meetings with loved ones, and during a pandemic with which we recently had problems, it is even recommended :-). On the other hand, MECOOL NOW requires further improvements, such as the possibility of installing applications via a USB flash drive. Maybe then Netflix HD could be installed. Nevertheless, if you are looking for a streaming device (also supports AV1 decoding) with a built-in video call camera, MECOOL NOW should satisfy you. And most importantly, with this device, your old TV will truly be a Smart TV, no doubt about it. 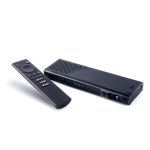