Today we have for you a review of cheaper TV Box with Voice Remote control from Magicsee brand called Magicsee N5 NOVA.

TV Box comes with Rockchip RK3318 SoC, a cost-down version of RK3328 SoC, and also supports 4K@60fps. Is this TV Box worth our recommendation? you will learn from our Magicsee N5 NOVA review.

We want to say thanks to Gearbest store for sending us a Magicsee N5 NOVA TV Box to review.

The following video from our YouTube channel where you can take a look at more Magicsee N5 Nova TV Box and bundled accessories.

TV Box is well made. As mentioned at the beginning of TV Box is equipped with a new Rockchip RK3318 SoC and also runs on Android TV OS 9.0.

On one side are two USB ports (USB 2.0  and USB 3.0) and micro SD card slot. On the rear panel are HDMI port, AV port, RJ45 Ethernet port,  DC jack. At the bottom of the device, there are also four rubber pads to prevent shifting, and recovery hole. N5 NOVA comes with 2.4G wireless remote control with an air mouse feature (known from Beelink’s TV Boxes).  Voice Remote Control works very well. Recognizes voice commands without any problem. Just press the button with the microphone symbol and say the command. All you have to do is put the USB receiver in the USB port at TV Box. Below pictures.

TV Box has a has a great-looking launcher with the option of choosing a wallpaper. Launcher with option status bar (On / OFF). We can choose typically the resolution of FHD 1920×1080 (1080p 60Hz) but you can also adjust the preferred resolution or set the auto switch. One can get the impression that TV Box is sometimes too slow, there are delays in accessing applications and settings. We had no problem with Ethernet and WiFi connection to the router and to the Internet. Ethernet: Download – 93.5Mbps Upload – 36.1Mbps, WiFi: Download – 180Mbps Upload – 32.6Mbps.  In addition to the remote control, we used wireless Logitech MK540 Advanced set and a gamepad from iPega called iPega PG-9076.

Despite the fast WiFi, there are problems with its stability and speed. Despite the connection via the AirScreen app, the mirror screen did not work. TV Box supports Youtube only up to 1080p, but via Youtube Android TV supports 4K. Unfortunately, through 4K 2160p, it doesn’t run smoothly. Netflix up to 540p. TV Box comes with the pre-installed Kodi 18.2. In addition, TV Box has a lot of picture settings. At N5 Nova TV Box run simple games from Google Play, like Beach Buggy Racing and Fruit Ninja (great using 2.4G remote control with air mouse feature). We used iPega PG-9076 and played Beach Buggy Racing. Unfortunately it was not possible to play Asphalt 8, problem with downloading the game (information no Internet Connection). Below the screenshots.

The N5 NOVA TV Box runs on the Android 9.0, Kernel version 4.4.159. TV Box is equipped with Rockchip RK3318 quad-core Cortex-A53 processor @ 1.5 GHz and Penta-Core Mali-450 GPU. Firmware build
MGCTV15020190801. CPU speed between 408Mhz and 1.10GHz. On the following screens, you can see exactly the components used and their specification (Information taken from the CPU-Z app, the application does not yet recognize RK3318 SoC). The device has root access. Below also DRM info screenshots.

For testing, we use the AnTuTu Video Tester 3.0 app and AnTuTu Benchmark 7. 2.0.

Antutu Video the result 697 and and some unsupported codecs. Video playback by Kodi 18.2 runs not smoothly, frequent jams and buffering (playback via USB3.0).

The following table of video samples tested for Kodi 18.2. TV Box plays the video on YouTube only in 1080p, but via Youtube Android TV runs 4K 2160p (not smoothly).

Magicsee N5 NOVA is not the worst TV Box, but considering its performance, speed of action, video playback, it doesn’t impress. Most likely, it requires optimization, which we hope will bring new firmware. Voice command support, fast WiFi and the current price speak in his favor. If you have a really limited budget then you may want to consider buying N5 NOVA. However, in our opinion, it is worth looking for a more efficient TV Box. 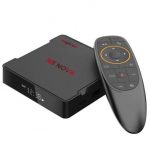