In early January at CES 2016 Intel unveiled new Intel Compute Sticks equipped with a Core M Skylake. Intel however is not resting on its laurels and develops its compute sticks not only powerful hardware, but also additional components. During the IDF 2016 Shenzhen Intel unveiled a new Intel Compute Stick having to Core M chip also comes with Intel Realsense F200 camera.

Currently the device is in prototype stage, but it is possible that will soon be available. So far, a unique combination of PC Stick with the camera gives you more opportunities to use. Putting Intel compute stick with Realsense camera on a TV,enables easy video calls and entertainment, use gestures and Windows Hello (is a more personal way to sign in to your Windows 10 devices with just a look or a touch. You’ll get enterprise-grade security without having to type in a password).

Intel did not give us much information about the technical details, we know that these new PC-on-a-stick will mount Intel Core M3 and M5 (Skylake) processors, but we do not know the amount of memory and storage support. As the Compute Stick for sale, also this new device is equipped with a fan for the dissipation of internal heat produced by the components with the objective of optimal operation of the device even “under load”. The Intel Compute Stick with Realsense camera has some interfaces: two USB ports (one of which is USB 3.0), a mini HDMI, microUSB for the power supply and a power button. On one side we find a Intel Realsense F200, which will be useful primarily for Windows Hello, and for the recognition of gestures, but whose integration has increased the dimensions of the stick. The camera supports 8-bit infrared capture and 1080p color video recording at 30 frames per second. 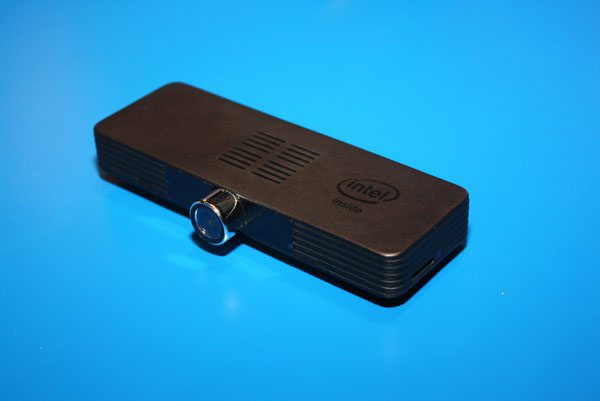 More information can be found on the video recorded by the Notebook Italia. Where also see that through the application “Intel Keyboard app” installed on the smartphone or smartwatch can remotely control the Intel Compute Stick with Front-Facing Camera powered by Core M processor.