We are after testing the Himedia Q30 TV Box so today we want to introduce you to HiMedia Q30 review. Undoubtedly, this is a splendid great TV Box from HiMedia, but the firmware requires some optimization and improvement of some features. What exactly? You will find out from this review. Together we follow the standard stages of our review. We invite you to read.

I want to say thanks to HiMedia company (HiMedia Technology Limited – www.himediatech.com, Facebook – https://www.facebook.com/Himediatech/) for sending us a HiMedia Q30 TV Box to review. The HiMedia Q30 TV Box can be bought directly from HiMedia via email, TV Box can also buy on Gearbest for $139 + free shipping, and on Geekbuying for $149. 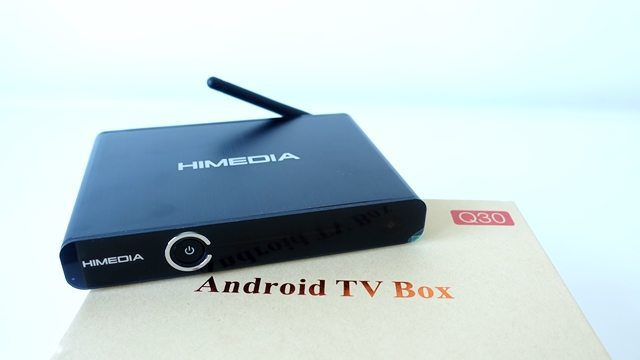 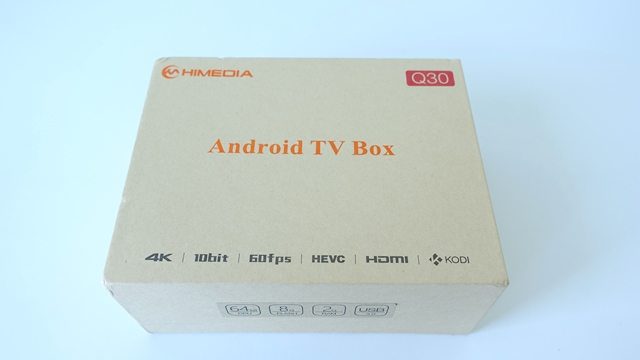 The following video from our YouTube channel where you can take a look at more HiMedia Q30 TV Box and bundled accessories.

The HiMedia Q30 is another great TV Box made in high-end style, from HiMedia portfolio. The housing like most TV Box from HiMedia is made of aluminum (in black color).  The case and the TV Box are doing a very good impression. TV Box is a really high quality. As mentioned at the beginning of TV Box is equipped with a cheaper version (HiSilicon Hi3798C V200) SoC from HiSilicon called HiSilicon Hi3798M V200, which also supports H.265/HEVC Main/Main 10 [email protected] 5.1 high-tier, 4K x [email protected] fps 10-bit decoding, H.264/AVC BP/MP/[email protected] 5.1, H.264/AVC MVC, 4K x [email protected] fps decoding, 4K x [email protected] fps 10-bit VP9 decoding and more. TV Box also runs on Android 7.0.  At the center of the top cover we find a logo HiMedia. On the front panel Q30 TV Box has a IR receiver, Power button and power LED. On one side there are two USB ports: USB 3.0 and USB 2.0. On another side is another USB 2.0 and SD card slot. On the rear panel are: S/PDIF optical audio, Composite AV (L/R Stereo), HDMI 2.0a, Ethernet LAN (RJ45), Upgrade hole and DC jack. 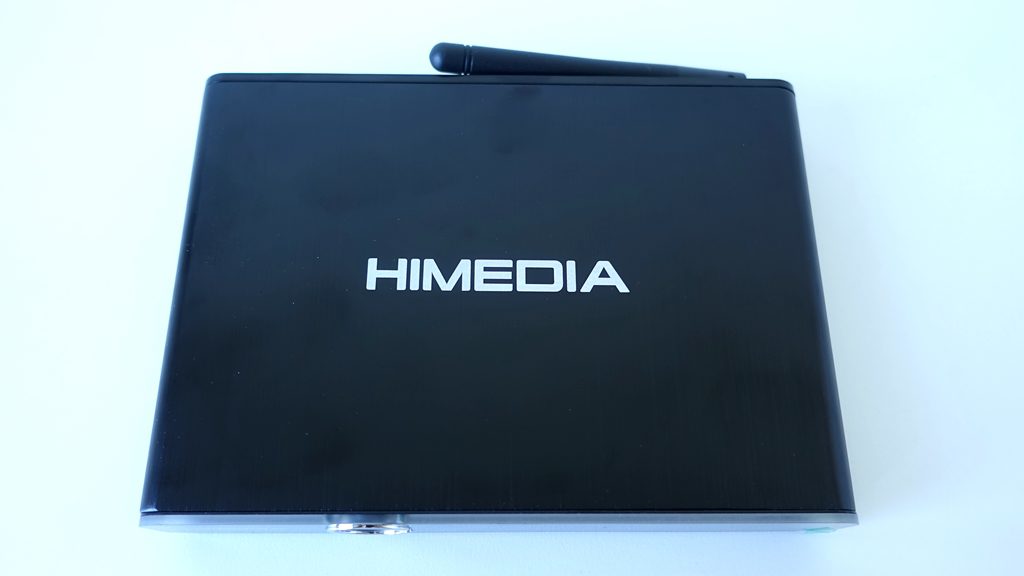 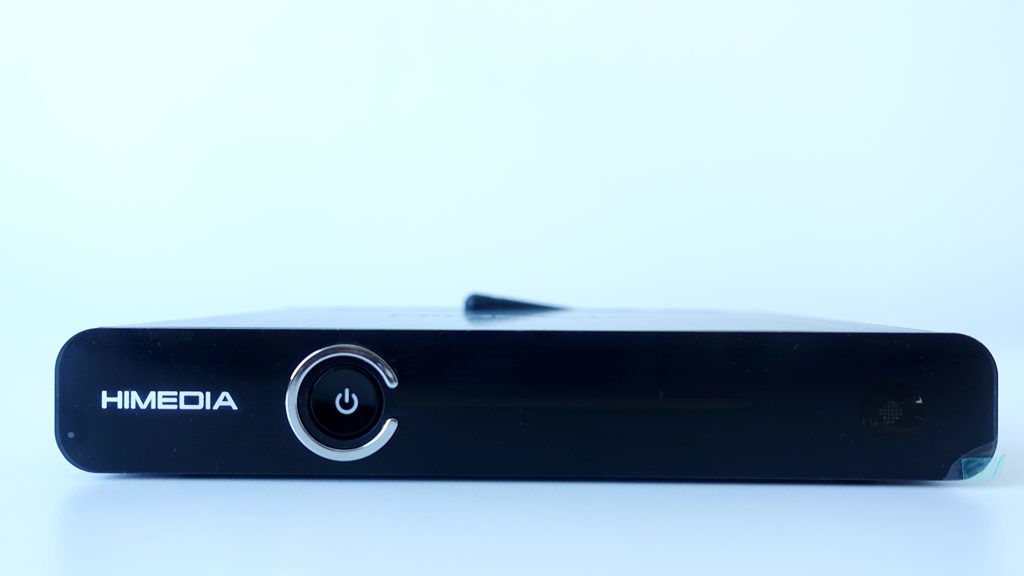 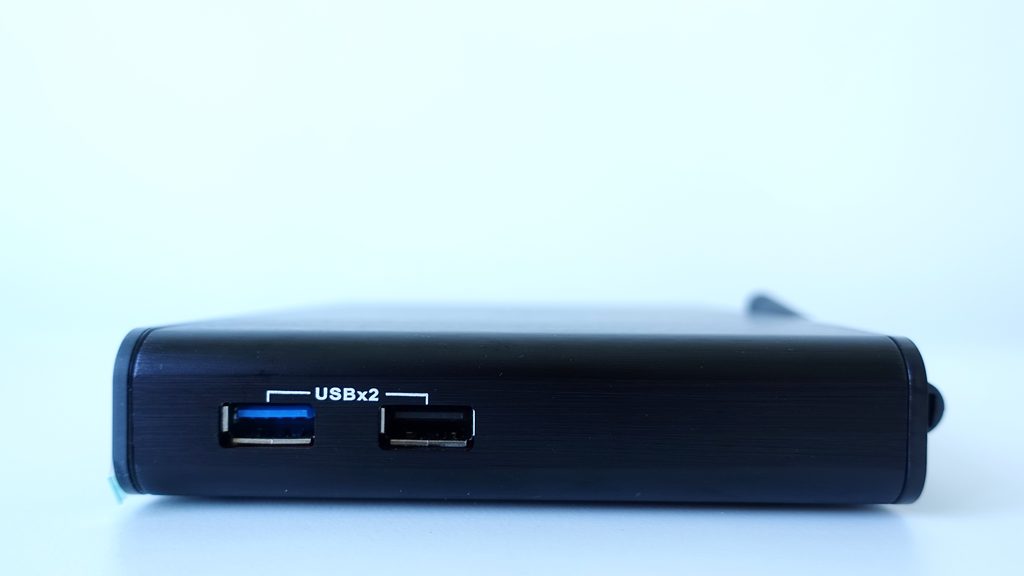 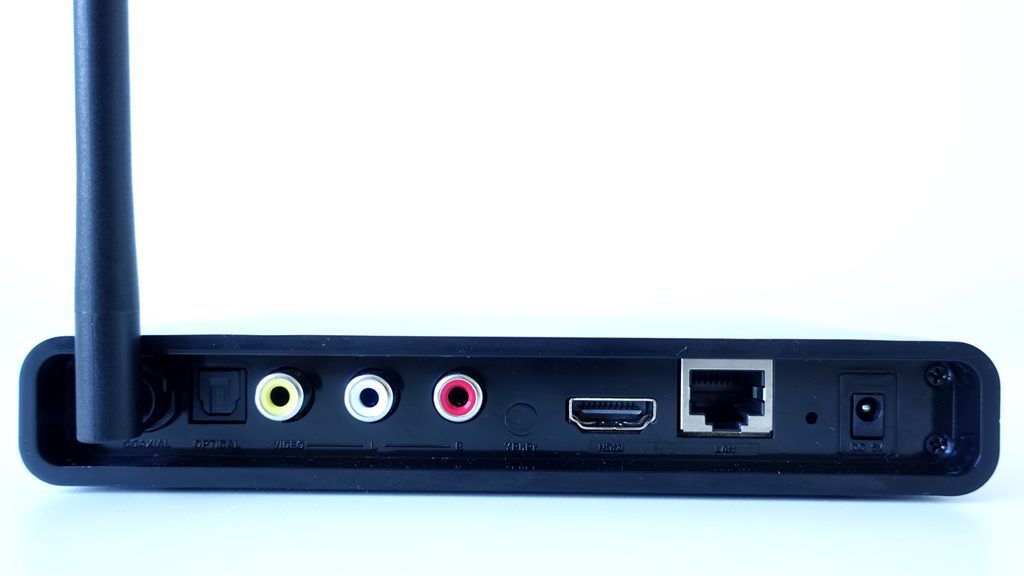 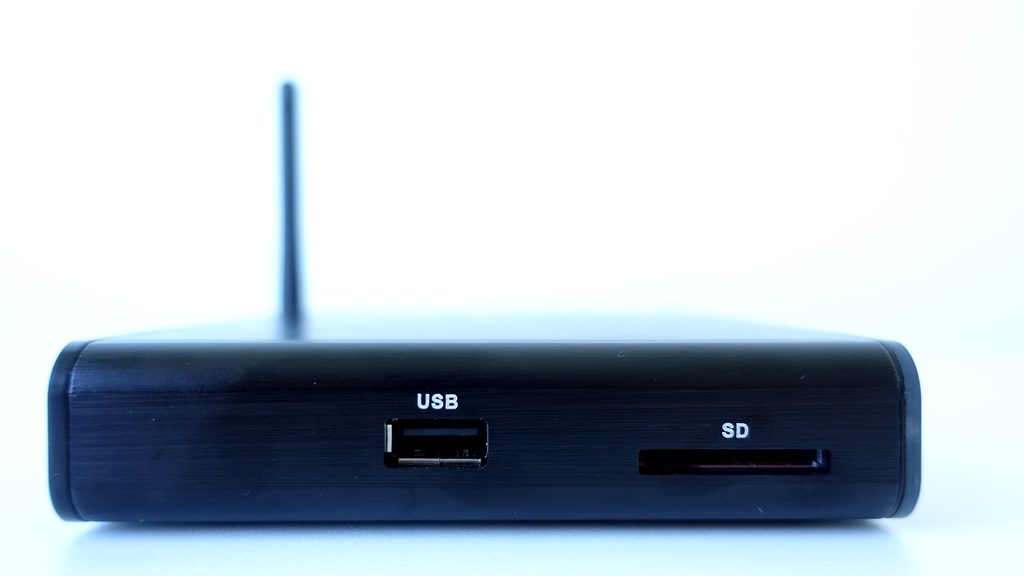 At the bottom of the device there are rubber pads to prevent shifting, and serial number and MAC address. Below also is a well-known remote control. 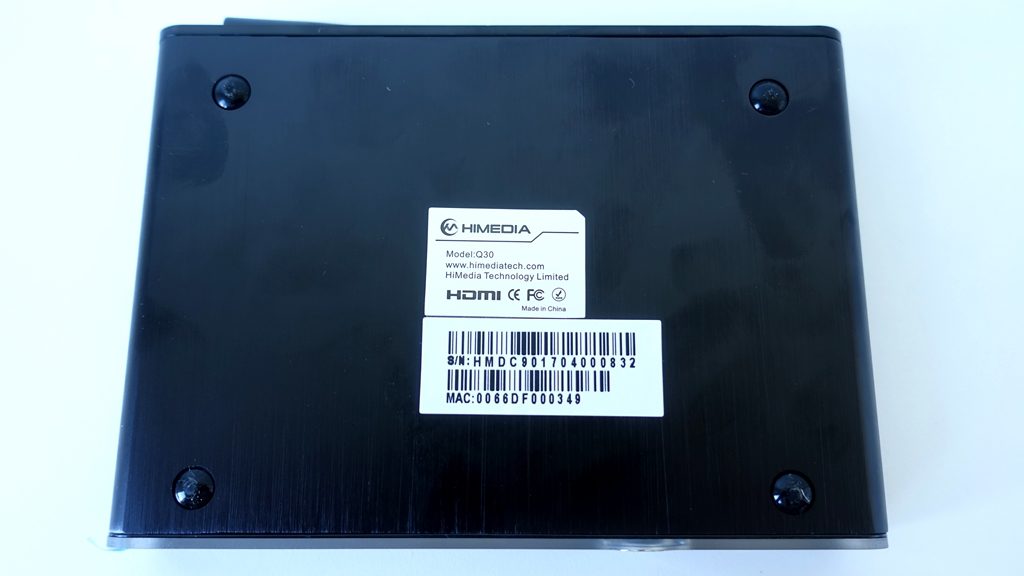 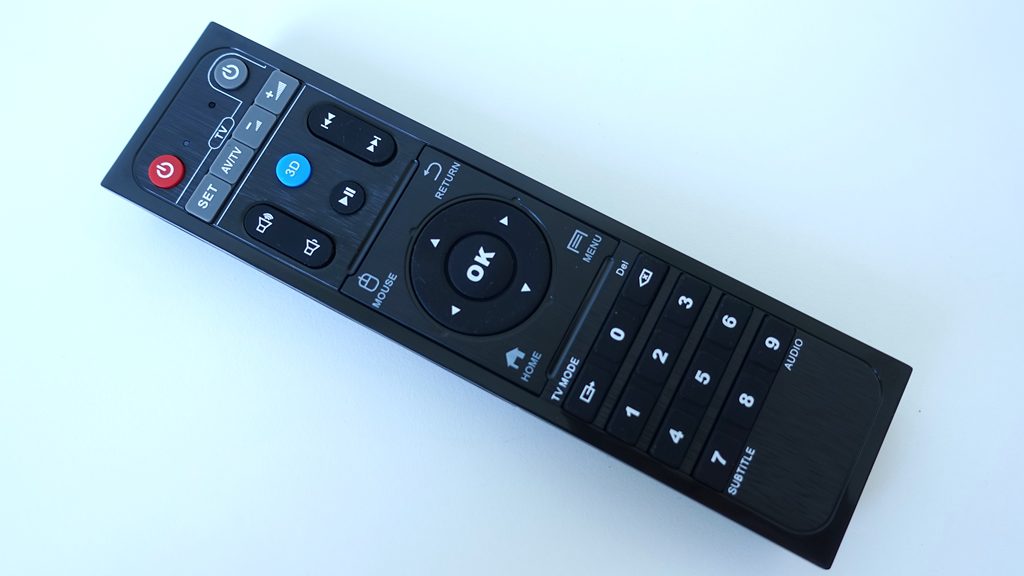 HiMedia Q30 has a well-known UI from earlier models (Q10 Pro, Q5 Pro, A5), launcher looks great and is very readable, providing quick and easy access to the most important features. We chose typical the resolution of FHD 1920×1080 (1080p 60Hz) but you can also adjust the preferred resolution (also 2160p 30Hz) or set the auto switch. In the display option, you can set (as in TV) contrast, brightness, and sharpness. Everything worked stable and very quickly without delays. The Netflix app from Google Play is not compatible, but you can use Netflix_v4.16.1 then everything works OK. HiMedia Q30 support also DLNA and Miracast. But it was not possible to connect via the pre-installed Miracast application. We used HiShare app – HiShare2.0.7 (from HiMedia) for Miracast, which can be installed on a smartphone or tablet. Of course, the Q30 can additionally be controlled using the dedicated application on the smartphone – HiControl_hmdCV200. On the smartphone, via HiControl App we see the main screen as if on a Q30 was launched mirrored screen. The application works quickly and without problems, it is nicely done. We had no problem with Ethernet and WiFi connection to router and to Internet, but Wifi connection could be faster. (Ethernet: Download – 93.30Mbps Upload – 41.41Mbps, WiFi: Download – 25.52Mbps Upload – 17.02Mbps). In addition to the remote control (that looks and works great), we used a standard keyboard and mouse and Gamepad GameSir G3s. On the remote control you can assign any application, on buttons 1 to 9.  Although the device in its specification has 8GB eMMC, storage has 4.06GB of data (Error displaying, by SAMBA storage size is correct). HiMedia Q30 does not have a standby mode, but we do not consider this as a disadvantage. The HiMedia Q30 TV Box has Kodi 17.3 “Krypton” (we have updated the preinstalled version 17.3 to latest 17.4). TV Box also has parental control, you can lock any application with a PIN code so kids do not have access. Unfortunately there is a problem with bluetooth. When turned on the bluetooth tv box does not find the device. Below some screenshots.

On HiMedia Q30, you can also play in popular games on Google Play. The bluetooh problem (through which we wanted to connect the GameSir G3s) was bypassed by the IR receiver. The combination of gamepad and TV Box is great fun. In Angry Birds we used a VENZ VZ-RK-1 airmouse.

HiMedia Q30 also supports movie poster, so if you plug your HDD with your video library it looks great below a few screenshots.

HiMedia Q30 powered by new HiSilicon Hi3798M V200 quad-core ARM Cortex A53 up to 2.0GHz processor and GPU ARM Mali-450, CPU speed between 400 MHz and 2 GHz. On the following screens, you can see exactly the components used and their specification (Information taken from the CPU-Z app).

For testing, we use the AnTuTu Video Tester 3.0 app and AnTuTu Benchmark 6.1.4. The result 917. Also worthy of note is that Q30 TV Box did not have not supported codecs. 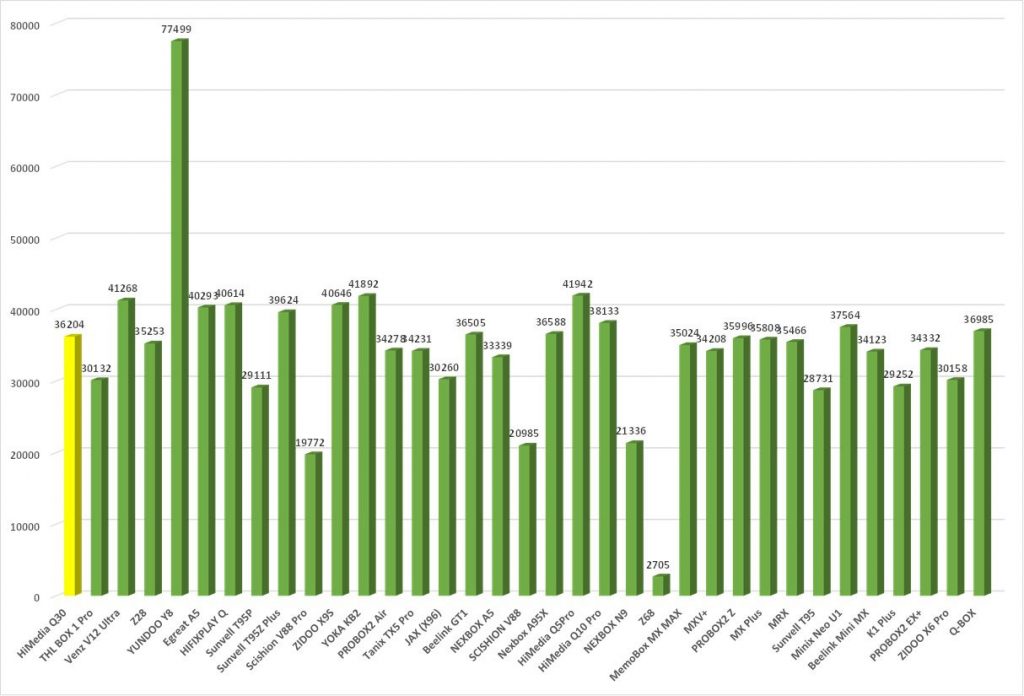 HiMedia Q30 is one of the cheaper TV Boxes from HiMedia and it is also another good TV Box. Although some features require repair (bluetooth) and optimization. Himedia is one of the leaders in the TV Box market, so we hope to see some improvements in the next firmware (OTA update). Once again I want to say thanks to HiMedia company for sending us a HiMedia Q30 sample. If you are looking for a good quality TV Box for your home entertainment center and vendor support you should consider buying a HiMedia Q30.