Today we want to introduce you to HiMedia A5 review. HiMedia A5 is another great TV Box from HiMedia. Which one this time got one of the most popular SoC among TV Boxes – Amlogic S912. Of course, the TV Box does not have many features as the HiMedia Q10 Pro, but the TV Box is enough to provide home entertainment at a high level. Together we follow the standard stages of our review. We invite you to read.

I want to say thanks to HiMedia company (HiMedia Technology Limited – www.himediatech.com, Facebook- https://www.facebook.com/Himediatech/) for sending us a HiMedia A5 TV Box to review. The HiMedia A5 TV Box can be bought directly from HiMedia via email, TV Box can also buy on Geekbuying for $118.99 + free shipping.

The following video from our YouTube channel where you can take a look at more HiMedia A5 TV Box and bundled accessories.

At the bottom of the device there are rubber pads to prevent shifting, also has holes for the discharge of hot air, and serial number and MAC address. Below also remote control.

HiMedia A5 has a well-known UI from earlier models (Q10 Pro and Q5 Pro), launcher looks great and is very readable, providing quick and easy access to the most important features. We chose typical the resolution of FHD 1920×1080 (1080p 60Hz) but you can also adjust the preferred resolution or set the auto switch. In the display option, you can set (as in TV) contrast, brightness, and sharpness. Everything worked stable and very quickly without delays, Netflix also works without problems. HiMedia A5 support also DLNA and Miracast. We had no problem with Ethernet and WiFi connection to router and to Internet (Ethernet: Download – 312.46Mbps Upload – 42.49Mbps, WiFi: Download – 197.14Mbps Upload – 41.86Mbps). In addition to the remote control (that looks and works great), we used a standard keyboard and mouse and Gamepad GameSir G3s. On the remote control you can assign any application, on buttons 1 to 9.  Although the device in its specification has 16GB eMMC, storage has 11.73GB of data. HiMedia A5 does not have a standby mode, but we do not consider this as a disadvantage. The HiMedia A5 TV Box is another TV Box which has Kodi 17.1 “Krypton”. Below some screenshots.

We have not found a dedicated smartphone app for A5 TV Box from Himedia (HiControl is dedicated to TV Boxes based on HiSilicon Hi3798C V200 SoC). But we can recommend a good app called CetusPlay. Applications (app on host and app on smartphone) are available on the Google Play store. Install CetusPlay On TV/Box app on TV box and open, Install CetusPlay on a smartphone. The application works great, below screenshots.

On HiMedia A5 games from Google Play are working properly. You can play without a problem just connect gamepad or keyboard. We used GameSir G3s. The combination of HiMedia A5 with gamepad is great fun. Beach Buggy Racing, Real Racing 3 works without problem, even with high resolution works trouble free.

TV Box is equipped in the very popular a SoC Amlogic S912 octa-core ARM Cortex A53 processor @ up to 2.0GHz processor and GPU ARM Mali-T820MP3, CPU speed between 100 MHz and 2.02 GHz. On the following screens, you can see exactly the components used and their specification (Information taken from the CPU-Z app). The device is detected as q201 (q201) and board q201. Below screenshots.

After using the DRM info (app) we know that HiMedia A5 TV Box supports Google Widevine Moudlar DRM, but unfortunately does not support Microsoft Playready DRM, Marlin DRM and Verimatrix VCAS. Device does not have root access.

For testing, we use the AnTuTu Video Tester 3.0 app and AnTuTu Benchmark 6.1.4. The result 860. Also worthy of note is that A5 TV Box did not have not supported codecs. 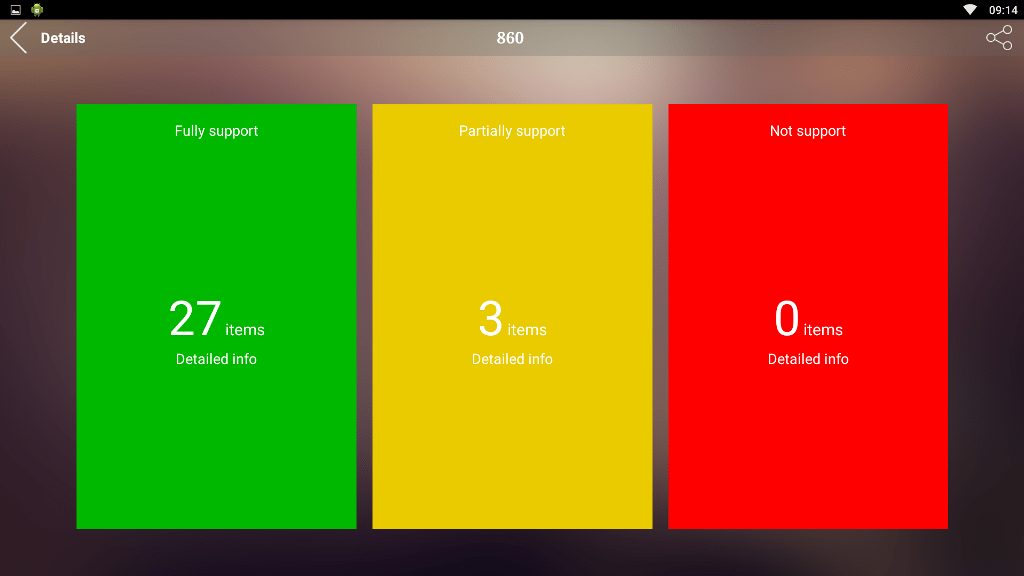 HiMedia A5 is another successful TV Box from Himedia. Big plus for aluminum housing. TV Box copes well with 4K video playback. Of course, the TV Box has fewer features compared to the Q10 Pro / Q5 Pro, but it is enough to provide home entertainment at a good level (video, games, browser, apps).  HIMEDIA company should provide the firmware update via OTA, then it would be more convenient. Once again I want to say thanks to HiMedia company for sending us a HiMedia A5 sample. If you are looking for a good quality TV Box for your home entertainment center and vendor support you should consider buying a HiMedia A5. We recommend a HiMedia A5 Android TV Box.

Gearbest Clearance Sale Up to 80% OFF Every Category (Promo)