Today we want to introduce you to GOLE1 Plus review. The new HIGOLE GOLE1 Plus has several different features than the previous GOLE1 (with 5-inch touch screen), but the new device with 8″ touch screen size is also small, but it’s easy to navigate the screen. We do not want to bet too much, but if you are looking for a device in such a combination (mini PC + touch screen) then GOLE1 Plus should satisfy you. More in the review. We invite you to read. Together we follow the standard stages of our review. 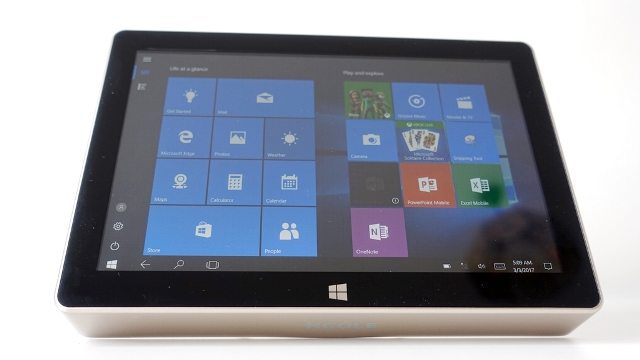 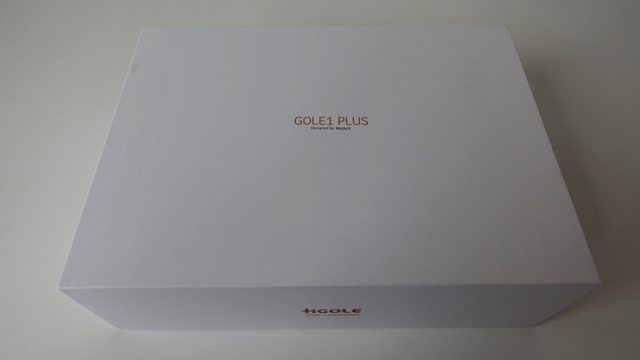 The following video from our YouTube channel where you can take a look at more GOLE1 Plus and bundled accessories.

GOLE1 Plus mini PC is very well made. Aluminum housing with golden highlights the quality and value of the product. At the top of the device you will find glossy touchscreen 8 inches, with the logo of Windows. GOLE1 Plus makes a great impression, it’s really high-quality device. As we wrote in the beginning a mini PC is equipped with Intel Atom x5-Z8350 quad-core, up to 1.92GHz. GOLE1 Plus runs on Windows 10 Home 64bit (not activated) just connect the device to the Internet system will be activated. By mounted screen we have access to easily browse all files stored on the mini PC and the ability to take full advantage of the device for work and entertainment. However, if we want to work “seriously” just hook up GOLE1 Plus via HDMI to a larger monitor, and connect the mouse and the keyboard (great!).

On the left side: Speaker hole

At the bottom of the device there are rubber pads to prevent shifting, also has holes for the discharge of hot air, and sound coming out. s you can see there are also holes for wall mounting via VESA standard (MIS-D 75x75mm) and sloped position on desktop like as below, screw up both metal poles into mounting hole.

Below is a GOLE1 Plus picture in combination with the Samsung 10.1″ tablet to make it easier to imagine the size of the device.

The GOLE1 Plus comes with Windows 10 Home 64bit not activated, but you need to connect the device to the Internet and system will be activated. Updating the device downloads easily and correctly. Tablet mode and mini PC mode works great, also multi tasks works awesome. Pre-created user account / administrator called F1S. Below are some screenshots.

There’s a single 57.5 GB C:/ drive that had 27.4 GB free space after installing Firefox and Adobe Flash. During the tests, Windows 10 Home runs without problems and stable. Installed Windows 10 Home has the most current drivers, but also you can check if there are new driver updates via the Intel Driver Update Utility. Below also a screenshot of disk management, you can see all the disk partitions.  There were no problems with the Wifi and Ethernet connection to Internet. When fully charged and the normal operation (YouTube, games, and work on Windows) battery lasts for about 7.5h

When you enter the BIOS, you can see that the device has UEFI 2.4. Below are a few screenshots.

The GOLE1 Plus runs at a resolution of 1280×1080. It is a pity that the device does not work in 1920×1080 resolution, by connecting via HDMI image would be displayed on the entire screen. For testing, we used also Gamepad GameSir G3s and typical keyboard and mouse. To perform test video was installed the latest stable version Kodi 17.1 Krypton. We tested GOLE1 Plus how copes with the games. We launched a few simple games such as: Beach Buggy Racing and Jetpack Joyride,  Asphalt 8: Airborne and Minecraft. Games also work great on the big screen. GOLE1 Plus + gamepad (GameSir G3s) is great fun. On GOLE1 Plus you can also play while holding the device in your hands like on a tablet.

As I wrote earlier, GOLE1 Plus runs on Windows 10 Home 64bit, the  system activates when connected to the Internet. GOLE1 Plus mini PC is equipped with a well known Intel processor – Intel Atom x5-Z8350 Cherry Trail (2M Cache, quad-core, @ 1.44GHz up to 1.92GHz) and Intel HD Gen 8-LP GPU. On the following screenshots, you can see components used (Information is taken from the PerformanceTest 9.0 Evaluation Version ). HWiNFO64 detects Atom x5-Z8300 processor as X7-Z8350 CPU?! (detects incorrectly) and its Gen 8-LP GPU correctly. Below screenshots.

Video playback by Kodi 17.1 Krypton runs smoothly and stable. MPC-HC runs smoothly and stable. GOLE1 Plus mini PC with 8″ touch screen without problem seems plays movies with the resolution of 480p,720p and 1080p (24fps, 30fps,60fps) and also 4K (60fps) with various codecs videos such as H.264, H.265, MPEG2, MPEG4, RMVB and audio – DTS and AC3. Dolby Digital 5.1 worked fine via HDMI. Also, we tested several video formats – AVI, MKV, MP4 (typical formats in which it holds the majority of films) and also videos was played without any problems. I was able to play back media from both my USB flash drives without any issues. The tested GOLE1 Plus plays video files in 4K (also 60fps) without any major problems  (Big Plus!).  Video playback on youtube in 4K also working properly. The samples VP9 4K and 1080p also work smoothly.

Below is a comparison of benchmarks of previous Windows mini PCs. 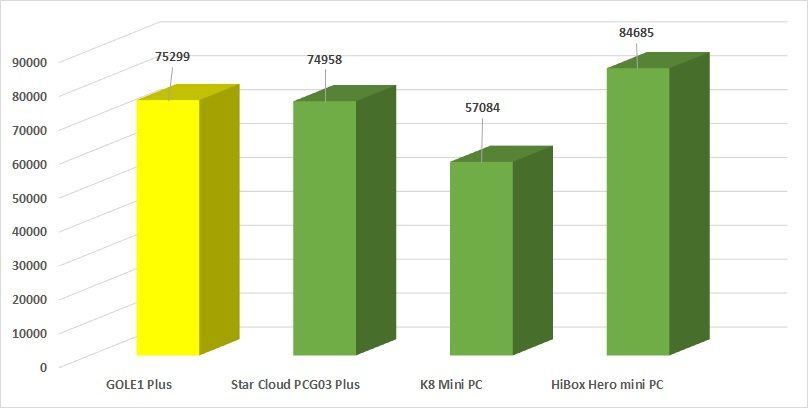 Below GOLE1 Plus results of the CrystalDiskMark 5.2.1

The GOLE1 Plus is an interesting combination of mini PC and tablet, or simply a mini PC with touch screen. The device with 8-inch screen is still mobile and pleasant to use. It works fast and seamlessly for entertainment (games and video playback in 4K) and typical Windows 10 work. It works great when traveling and in the office, giving you quick access to your files also on the big screen via HDMI (unfortunately not in FHD resolution 1920x1080px). Of course, the device can be used commercially for interesting projects, everything depends on needs and ideas. If you are looking for this type of device you should definitely consider buying GOLE 1 Plus, but on the other hand, you ask yourself, is not it better to buy a tablet 2-in-1 with a similar specifications with 10.1 touch screen and a mini HDMI port? Choice as always belongs to you.