We are after the Eachlink H6 Mini TV Box tests, which is why today we would like to encourage you to read Eachlink H6 Mini review. You probably want to know if this 6K Android TV Box is worth your interest, so we’re already answering. Considering the very attractive price, specification and capabilities of the TV Box, it is worth buying, but ….. but more in the review.

The following video from our YouTube channel where you can take a look at more Eachlink H6 Mini Android TV Box and bundled accessories.

Eachlink H6 Mini is a small TV Box,  made solidly, with good quality plastic. On the top cover has an interesting perforation.  H6 Mini TV Box is equipped in new Allwinner H6 (CortectA53 architecture and up to 1.8GHz, as in ZIDOO H6 Pro) which supports [email protected] ultra-HD video decoding and low-latency H.264 4K encoding and supports 6K video. There is also supports for HDR10 and HLG HDR, integrated Smartcolor 3.0 display system, more in H6 brief here. On the front panel is IR receiver and LED digital display. On one side there are USB 2.0 port, reset hole, USB 3.0 port, and micro SD card slot. On the sides of the housing are also visible holes. On the next side, there is a USB 3.0 port. On the rear panel are 5V DC micro USB, IR port, AV port, RJ45 Ethernet port, HDMI 2.0a and a composite S / PDIF port.

At the bottom of the device, there are also four rubber pads to prevent shifting, and there are also holes for hanging the TV Box. Below also typical Remote Control.

As you can see TV Box is powered via the micro USB port, so you just a typical charger, or power bank to run TV Box.

Eachlink H6 Mini has a simple UI with easy access to important functions. We can choose typical the resolution of FHD 1920×1080 (1080p 60Hz) but you can also adjust the preferred resolution or set the auto switch. Everything worked stable and very quickly without delays. We had no problem with Ethernet and WiFi connection to the router and to the Internet, but Wifi connection could be faster (hopefully the next firmware will be better). Ethernet: Download – 93.2Mbps Upload – 35.5Mbps, WiFi: Download – 14.8Mbps Upload – 34.5Mbps). In addition to the remote control, we used a standard keyboard, mouse and a gamepad from iPega called iPega PG-9076.  Although the device in its specification has 32GB eMMC, storage has 24.56GB of data. TV Box supports also Miracast. If you need to control the TV Box through a smartphone, you can use the Android TV Remote Control app or our favorite CetusPlay (Install CetusPlay On TV/Box app on TV box and open, Install CetusPlay on a smartphone). H6 Mini supports Netflix up to 720p and 1080p Youtube (only full HD). TV Box has pre-installed FilmOn application with access to many live channels. We also installed the latest Kodi 17.6. On Eachlink H6 Mini you can play in games from the Google Play store, as on other Android TV Box. Games run smoothly with maximum settings.  Just connect gamepad or keyboard. We used iPega PG-9076 and played Beach Buggy Racing, and other famous games Asphalt 8, Real Racing 3. Below the screenshots.

The Eachlink H6 Mini TV Box runs on the Android 7.0 Nougat and the Linux Kernel version 3.10.65. TV Box comes with firmware petrel_fvd_p1-eng 7.0 NRD91N 20181025 test-keys. H6 Mini TV Box is equipped with a SoC AllWinner H6 quad-core ARM Cortex-A53 processor up to 1.8GHz and GPU Mali-T720MP2, CPU speed between 480MHz and 1.8GHz. On the following screens, you can see exactly the components used and their specification (Information taken from the CPU-Z app). After using the DRM info (app) we know that H6 Mini TV Box supports Google Widevine but unfortunately does not support Microsoft Playready DRM, Marlin DRM, and Verimatrix VCAS. The device also has root access. Below screenshots.

Eachlink H6 Mini TV Box is a good TV Box if you do not have too many requirements. It works stably and quickly. TV Box copes well with 4K video playback. Unfortunately, it should (in our opinion) support Youtube 4K or at least 2K. You can not count on Netflix HD. WiFi needs improvement (works too slowly). We do not think that a new firmware will be available, but we can be wrong. If you have a limited budget and are looking for a TV Box with good parameters, you can consider buying an Eachlink H6 Mini TV Box, or wait and buy a better Android TV Box. 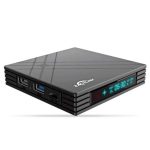