Today we want to introduce you to Bqeel MVR9 (NT-N9) TV Box review. The TV Box was equipped with the well-known SoC Rockchip RK3328. We do not want to betray too much, but it is difficult to keep good news in secret. Bqeel MVR9 TV Box supports Youtube playback in 4K 2160p. More information will be provided in the review. Together we follow the standard stages of our review. We invite you to read.

I want to say thanks to Nagrace company (Nagrace Times Technology Co., Ltd one of the leading OEM/ODM manufacturer – more http://www.nagrace.com) for sending us a Bqeel MVR9 TV Box to review. At the moment the TV Box is not available for sale. But other Bqeel TV Boxes are available on Amazon, so Bqeel MVR9 should also appear there. 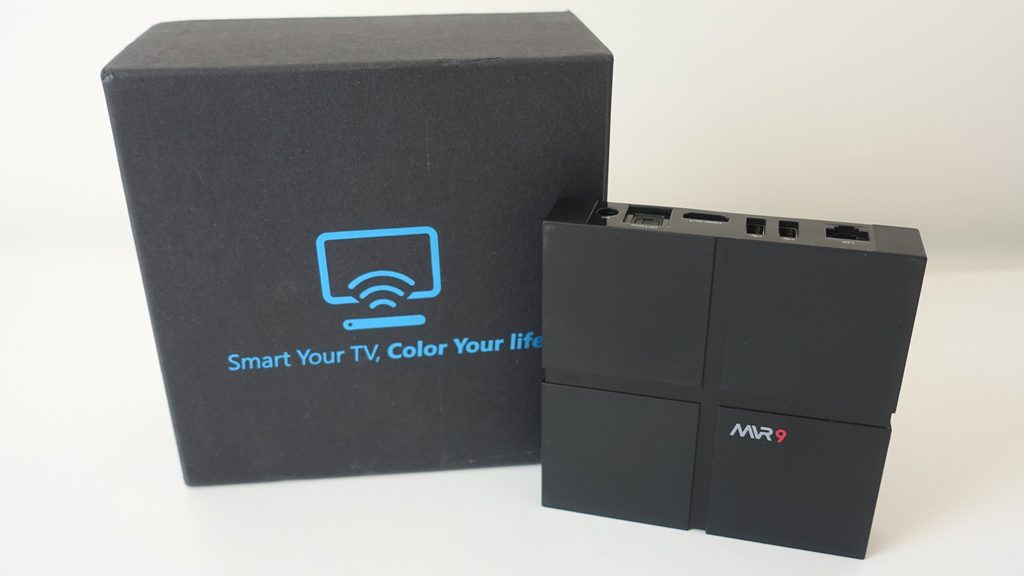 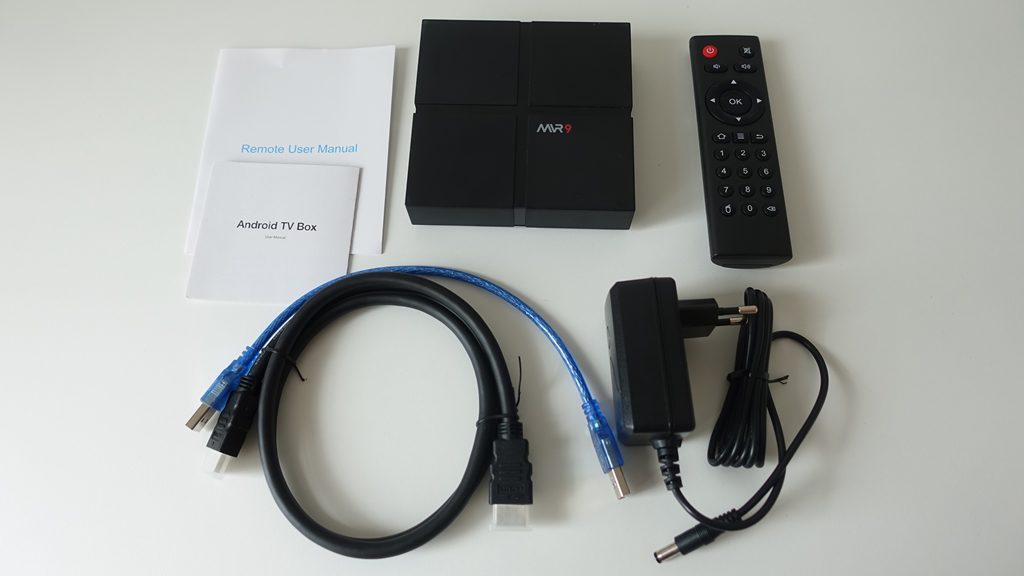 The following video from our YouTube channel where you can take a look at more Bqeel MVR9 TV Box and bundled accessories.

Bqeel MVR9 TV Box is made solidly, with good quality, no glossy plastic. The whole case is like a checkerboard. As we said at the beginning of his heart is Rockchip RK3328 64bit Quad core Cortex A53 processor which also supports 4K UHD H.264/H.265/VP9 video. Device runs on Android 7.1. The front panel has IR receiver and power LED. On one side there is a Power button. On the next side is two USB ports (1x OTG USB 2.0 and 1x USB 3.0) and micro SD card slot, AV port and Recover hole. On the rear panel are: RJ45 Gigabit Ethernet port, two USB ports  2.0, HDMI 2.0 port,  Optical S / PDIF port and 5V/3A  DC jack. 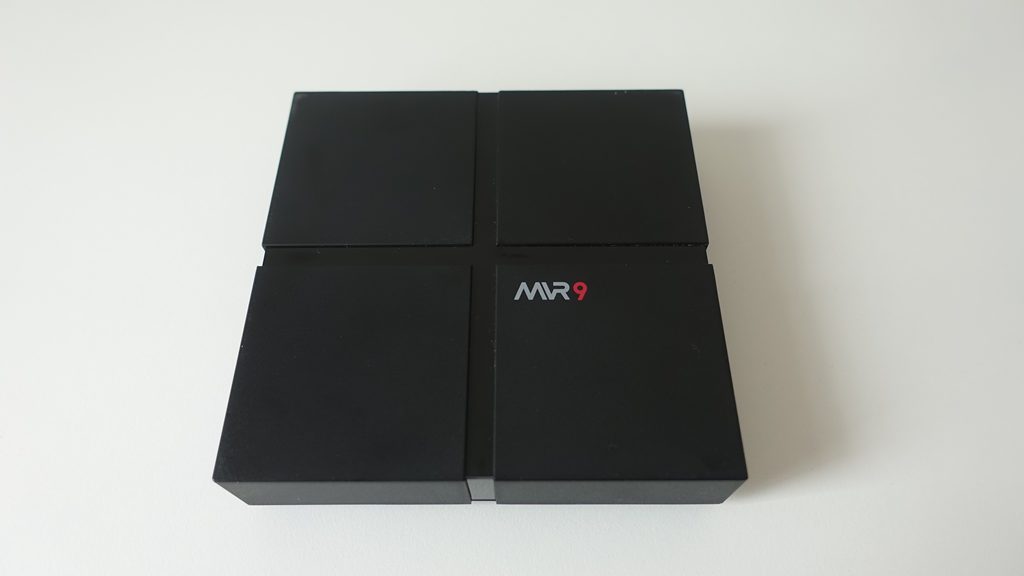 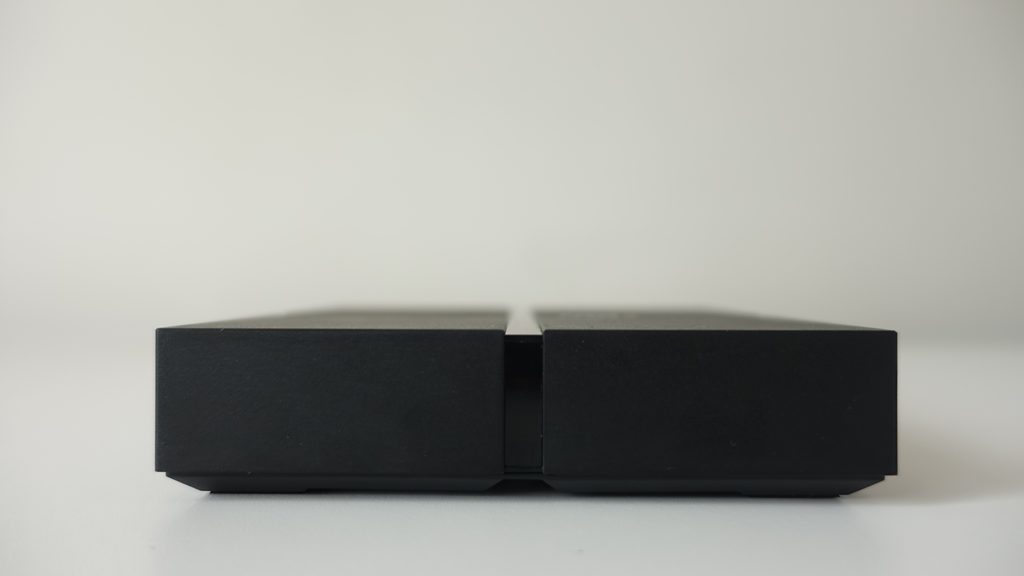 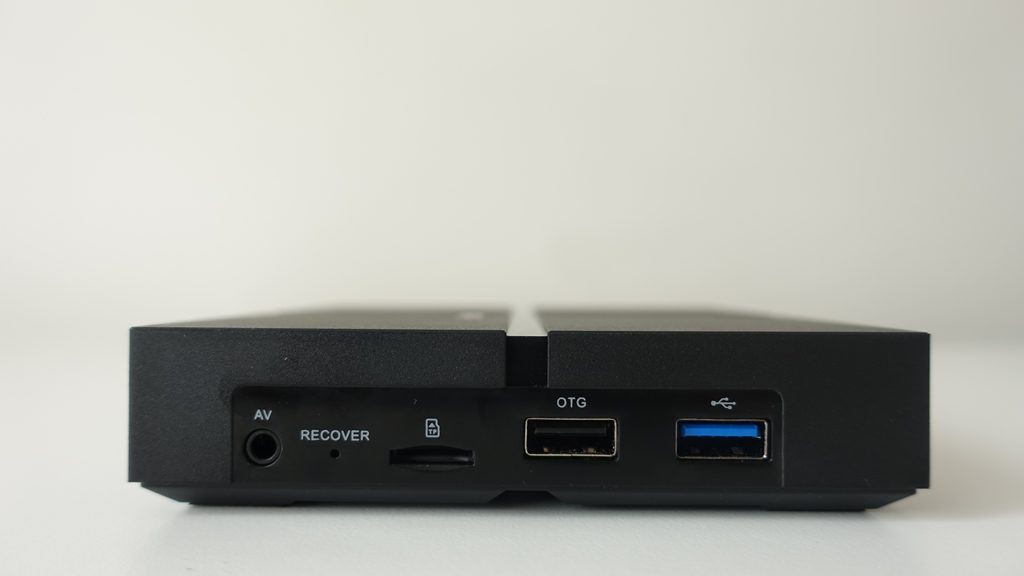 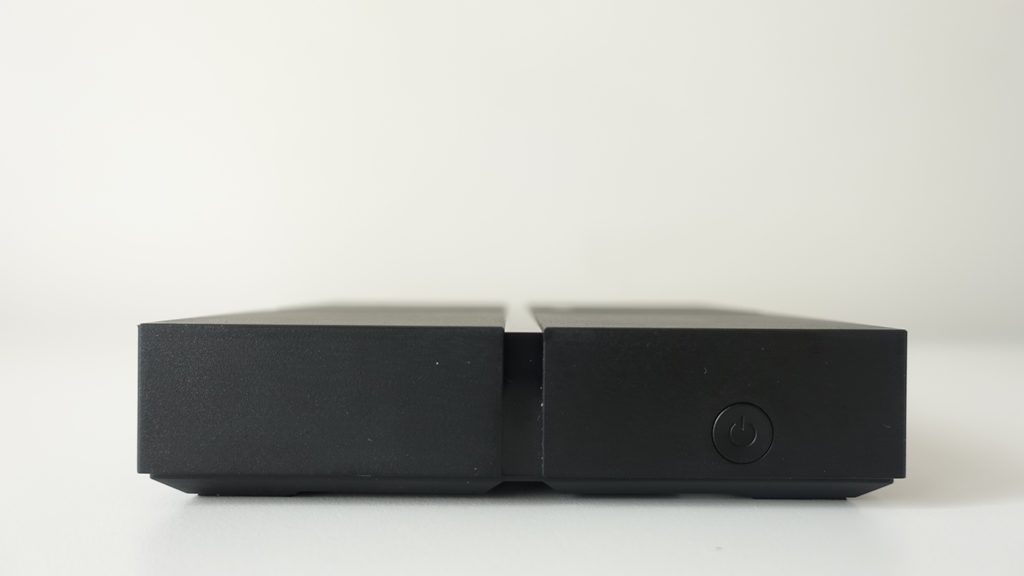 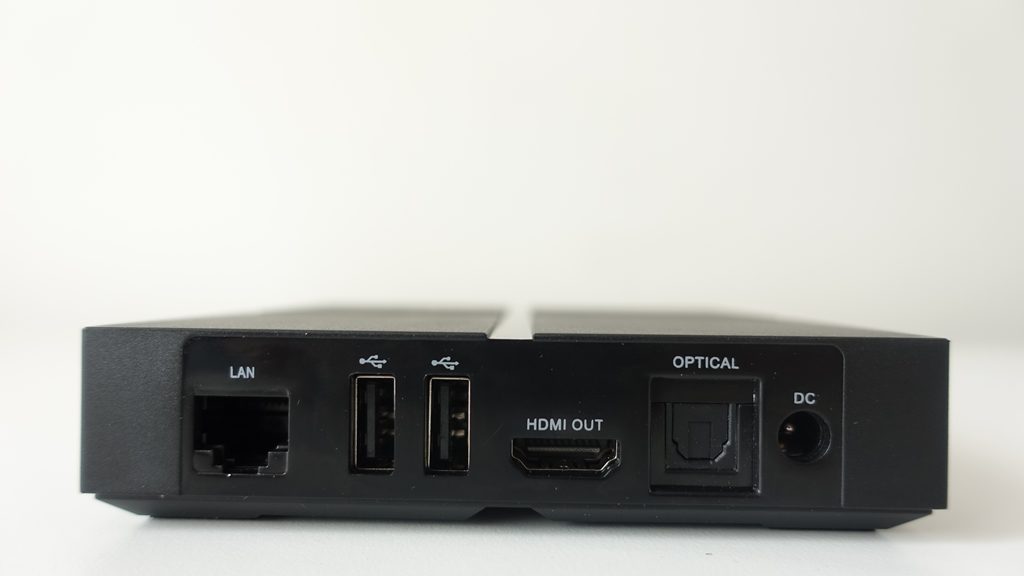 On the bottom there are holes for good ventilation and MAC address and Serial number. At the bottom of the device there are also rubber pads to prevent shifting. Below also remote control. 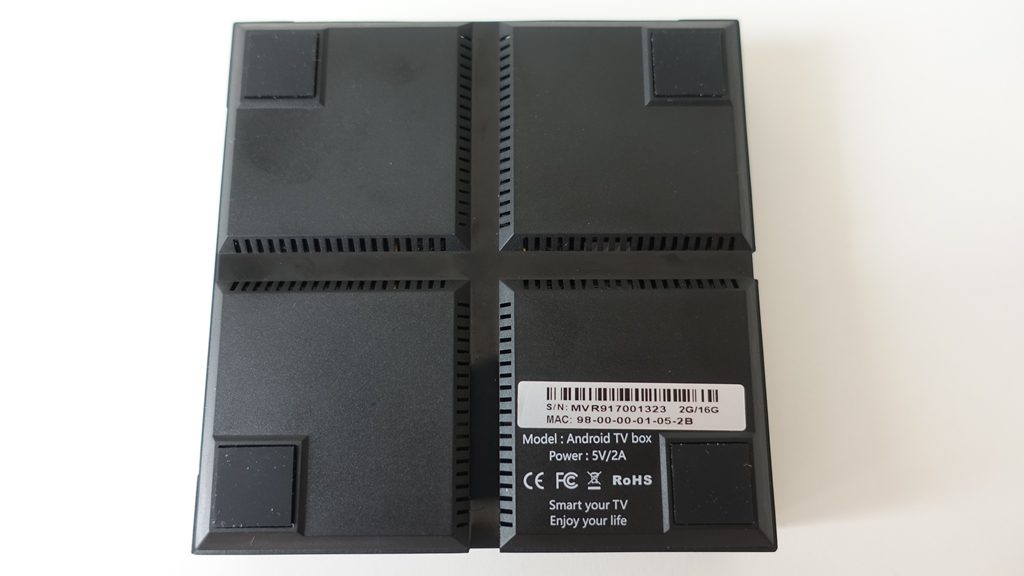 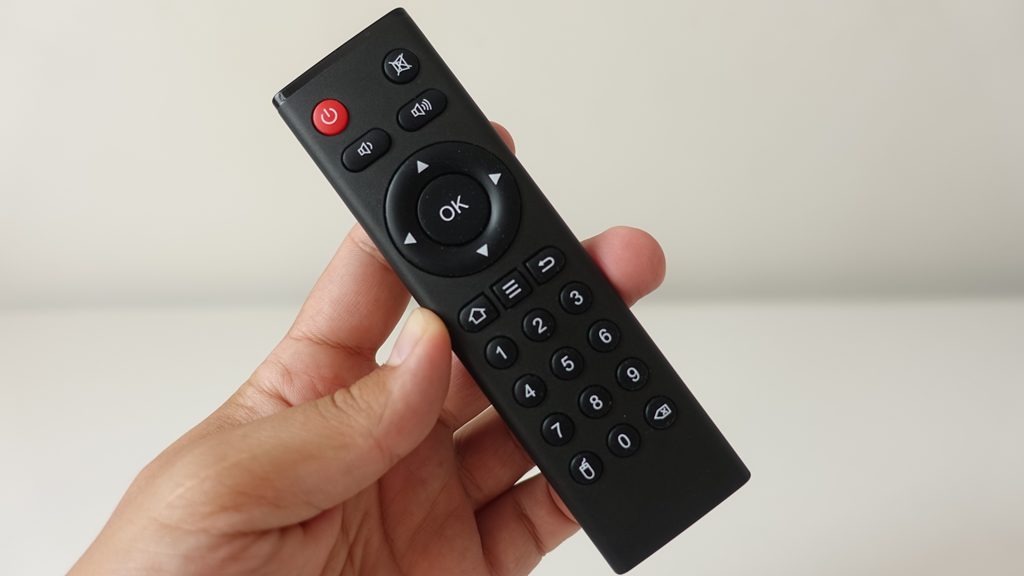 MVR9 has a new UI that we have not seen in other TV Boxes, so there is a breath of freshness 🙂 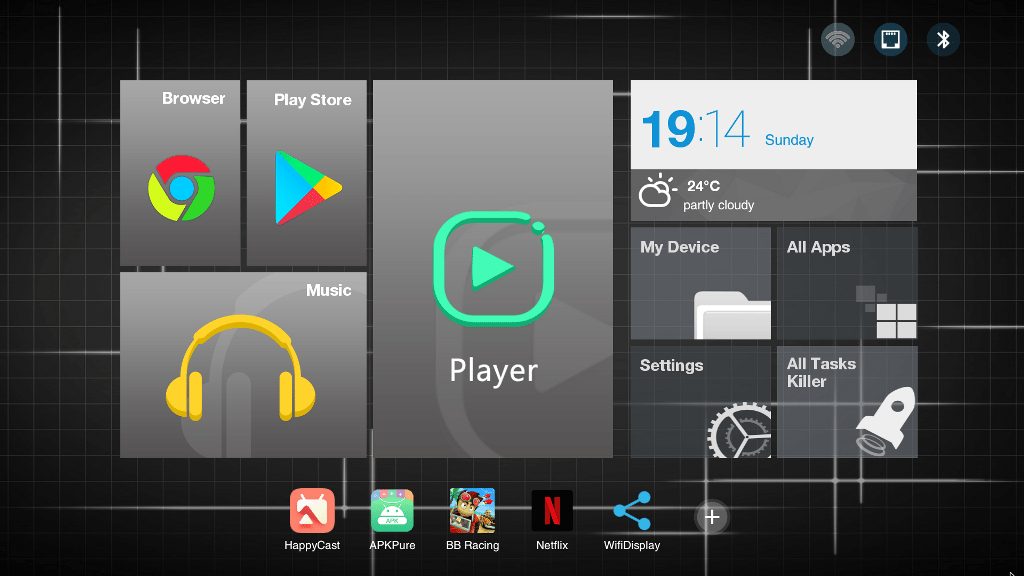 We can chose typical the resolution of FHD 1920×1080 (1080p 60Hz) but you can also adjust the preferred resolution or set the auto switch. In advanced options you can also set the contrast, brightness, sharpness etc. Everything worked stable and very quickly without delays. Optimization requires applications access via large launcher buttons. For example, by click on the big Google Play store button, we walk to the place where the Google Play store app is located (via the big button we should go directly to the Google Play Store app). The Netflix app from Google Play is not compatible, but you can use Netflix_v4.16.1 then everything works OK. TV Box  support also DLNA and Miracast. We had no problem with Ethernet and WiFi connection to router and to Internet, but Wifi connection could be faster. (Ethernet: Download – 316.97Mbps Upload – 41.29Mbps, WiFi: Download – 12.03Mbps Upload – 12.03Mbps). In addition to the remote control, we used a standard keyboard, mouse and Gamepad GameSir G3s.  Although the device in its specification has 16GB eMMC, storage has 14.56GB of data. The TV Box comes with a pre-installed RKMC 16.1 application based on Kodi 16.1. We also installed the latest Kodi 17.4. Below some screenshots.

We have not found a dedicated smartphone app for Bqeel MVR9 (NT-N9) TV Box, but we can recommend a good app called CetusPlay. Applications (app on host and app on smartphone) are available on the Google Play store. Install CetusPlay On TV/Box app on TV box and open, Install CetusPlay on a smartphone.

On MVR9 simple games from Google Play are working properly. You can play without a problem just connect gamepad or keyboard. We used GameSir G3s. Beach Buggy Racing, Real Racing 3 works without problem, even with high resolution works trouble free. Unfortunately, despite the installation of Asphalt 8, we could not start the game. 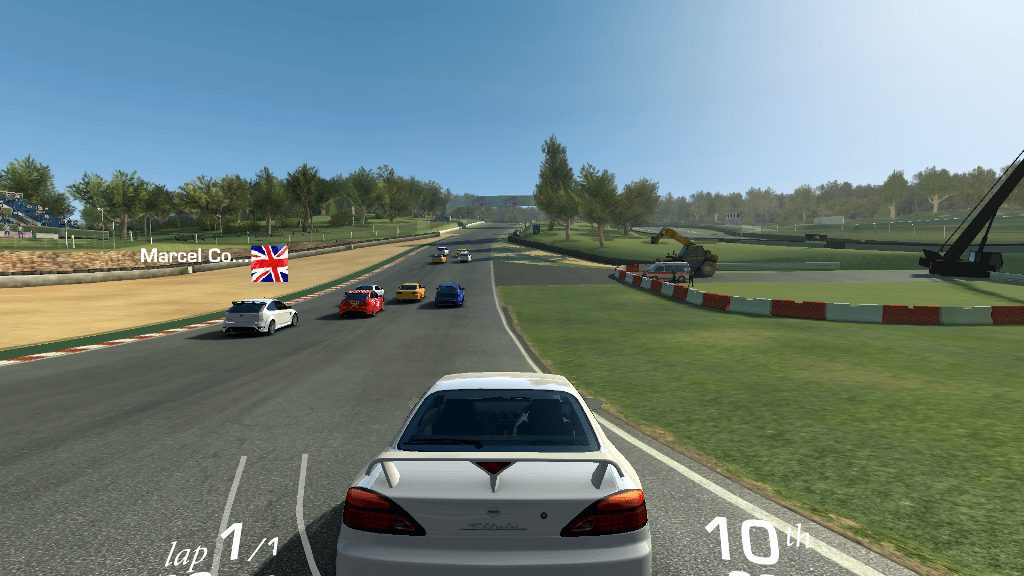 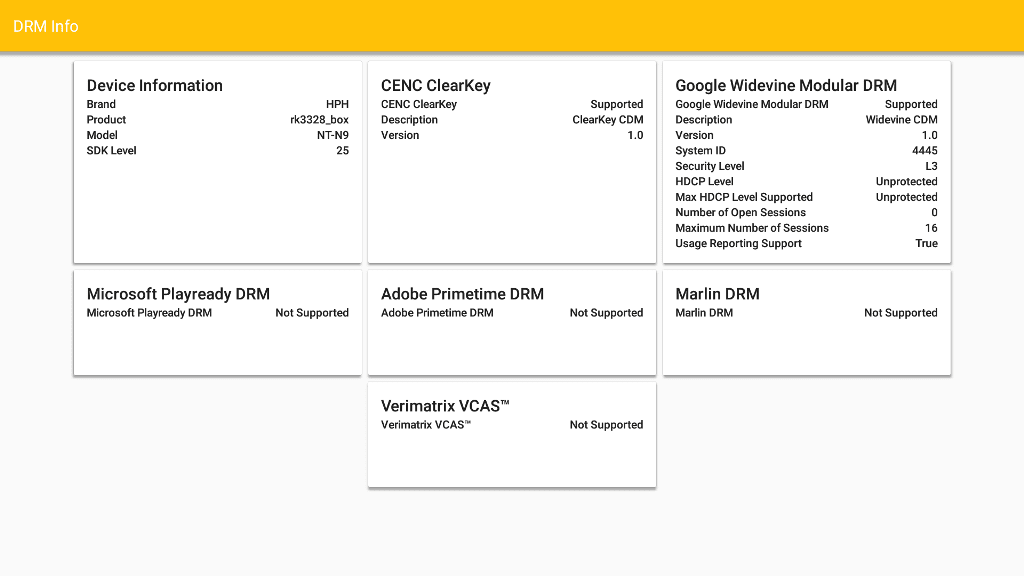 For testing, we use the AnTuTu Video Tester 3.0 app and AnTuTu Benchmark 6.1.4. The result 897. Also worthy of note is that TV Box did not have not supported codecs. 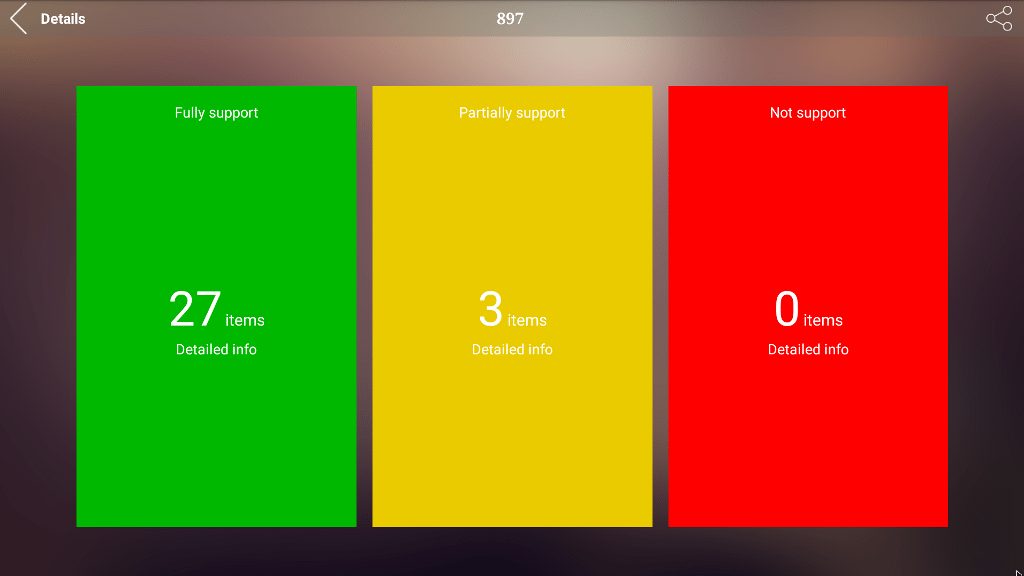 Video playback by RKMC 16.1 runs smoothly and stable. Unfortunately on Kodi 17.4 Krypton files [email protected] / 30fps do not work smoothly. The Bqeel MVR9 without problem seems plays movies with the resolution of 480p,720p and 1080p (24fps, 30fps, 60fps) and also 4K (60fps) with various codecs video such as H.264,H.265, MPEG2, MPEG4, RMVB and audio – DTS and AC3. Dolby Digital 5.1 passthrough worked fine via HDMI. Also we tested several video formats – AVI, MKV, MP4 (typical formats in which it holds the majority of movies), ISO and also videos was played fine. The tested TV Box plays video files in 4K (also 60fps) almost without any major problems. The following table of video samples tested for RKMC. As we mentioned, TV Box supports Youtube 4K (2160p). This is a big surprise and a big plus. Also, we tried to play VP9 4K video runs smoothly. 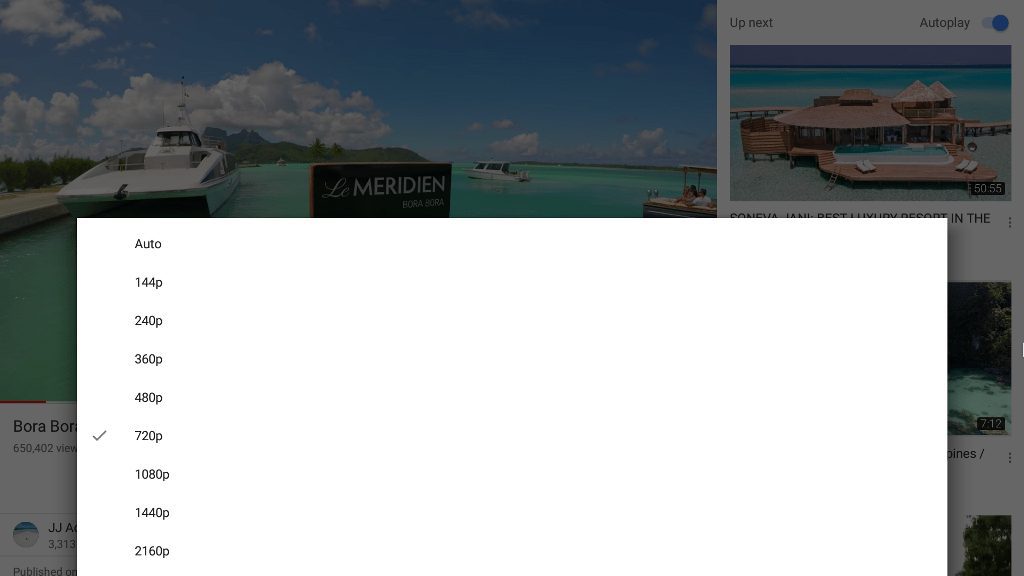 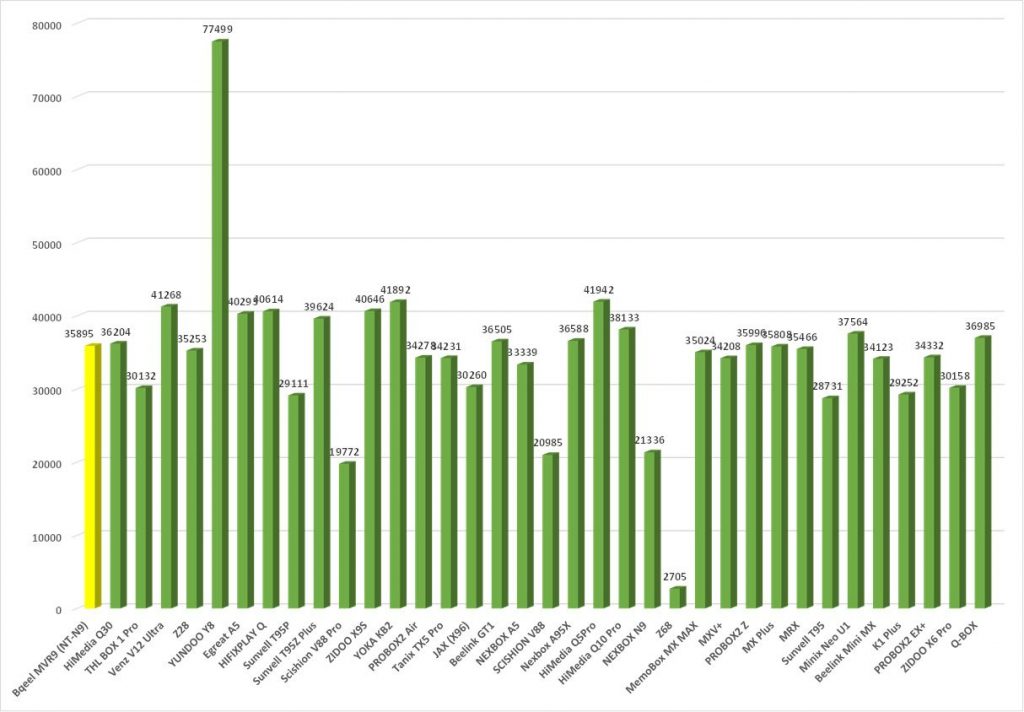 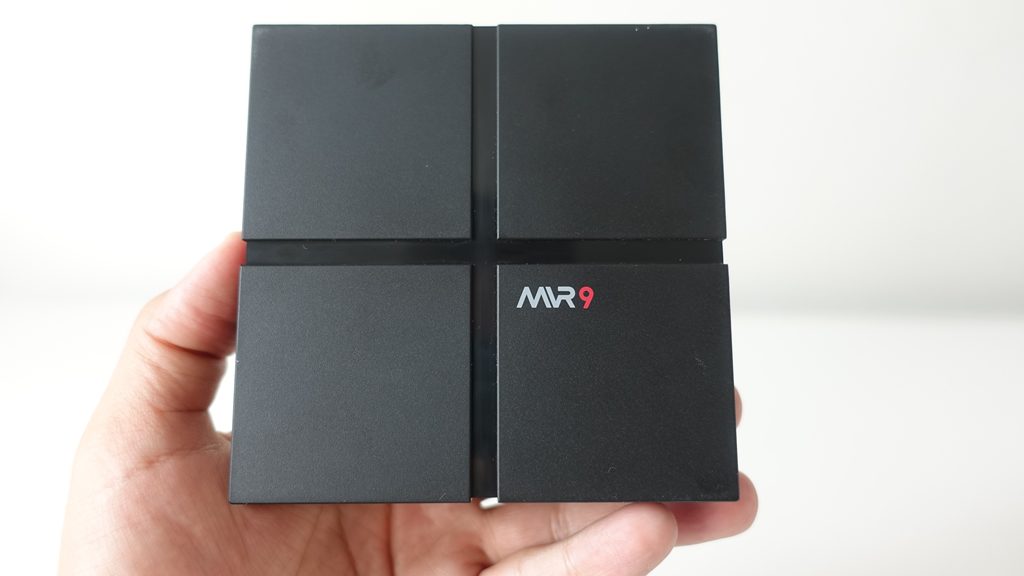 Despite the minor bugs that should be resolved with the firmware update, Bqeel MVR9 is a good TV Box worth the interest. TV Box copes well with playing multiple video formats and movies in 4K (via RKMC). The big plus for Youtube 4K (2160p) support. At the moment we do not have information about price and availability, but we hope that TV Box will soon appear on Amazon like other Bqeel TV Boxes. 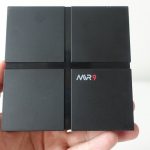