Will the new Beelink’s Mini PC be useful at home for home entertainment (video, games) or more to the office (work with office programs – word, excel, etc.) you will learn from this review.

We encourage you to read the Beelink L55 Mini PC review. Together we follow the standard stages of our review.

I want to say thanks to Beelink brand (Shenzhen AZW Technology Co., Ltd company) for sending us a Beelink L55 Mini PC to review.

The following video from our YouTube channel where you can take a look at more Beelink L55 and bundled accessories.

Beelink’s Mini PC is very well made, with very good quality plastic. The material is pleasant to touch and not fingered. The top cover features the characteristic Beelink’s logo. On the front are: Power button, Audio out/mic port, USB 3.0 fast charge, USB 3.0 port. At the back there are: DC jack (DC 19V3A), 2x USB 3.0, 2x USB 2.0, 2x Gigabit LAN (2x J45), Display Port, HDMI port. On the sides of the device, there are holes that good drain the air obtained from the active cooling. The L55 Mini PC is equipped with a fan, it is not a fanless Mini PC. On the bottom, in four feet, there are screws to unscrew the cover and place 2.5 SATA HDD, M.2 SSD or RAM. We’ve installed Hitachi 2.5″ HDD SATA 250GB 5400RPM.

The Mini PC comes with Windows 10 Home (activated).  Updating the device downloads easily and correctly. There’s a single 237GB C:/ drive that had 214GB free space after installing Firefox and Chrome. During the tests, Windows 10 Home runs without problems and stable. During the tests, we did not need drivers, but you can download them here.  We laso installed McAfee Total Protection antivirus.

Mini PC runs at a resolution of FHD 1920×1080. There were no problems with the Wifi and Ethernet connection to Internet. We launched a few games such as: Beach Buggy Racing, Asphalt 9: Legends and League of Legends. Games work without a problem.

When you enter the BIOS, you can see that the device has BIOS Version 2.18.1263, and supports Wake up on LAN function. L55 Mini PC except HDMI (1.4) has DP port (4K@60fps). This allows you to connect an additional screen and use dual display. Intel HD Graphics 5500 GPU handles this without a problem. To perform video tests we installed the latest stable version Kodi 18.3 “Leia”. Below you will find many screenshots, we encourage you to browse.

Below is the processor work on H.264 and H.265 video files via Kodi playback. We also tested playback via Youtube on two browsers: Chrome and Internet Explore. First of all, interestingly is a streaming video on youtube by Chrome does not work smoothly and heavily used processor. Streaming video on youtube by Internet Explorer runs properly without delay. On both browsers, the 1080p video was played without any problems. However, on the Chrome browser, each 4K 2160p video was not played smoothly (it loaded, checked for WiFi and ethernet). Almost the maximum CPU load, as shown in the shots below. On Internet Explorer playing only up to 1080p, you can not choose 4K. Netflix only up to 720p. The device warms up a bit, but the fan inside is good at cooling. The noise of the device during benchmarks was not disruptive. The device works not too loud.

In summary, Beelink L55 is a well-made Windows Mini PC that can be used at home as well as a small office. However, in our opinion, it is more suitable for the office as a mini desktop computer than for home entertainment. Due to video playback problems and Youtube 4K not being adapted as HTPC. L55 Mini PC is more suitable for office work and the use of office applications. The advantage is the Wake On LAN service, dual Gigabit port and bracket for mounting on the back of the display or on the wall. 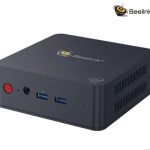