We’re already after testing, so today, we would like to show you the Beelink GT-King Pro review.

Beelink GT-King Pro is the new “King of Benchmarks” (150052 points in Antutu Benchmark), but more on this in our review. Together we follow the standard stages of our review. We invite you to read.

I want to say thanks to Beelink brand (Shenzhen AZW Technology Co., Ltd company) for sending us a Beelink GT-King Pro to review.

The following video from our YouTube channel where you can take a look at more Beelink GT-King Pro TV Box and bundled accessories.

Beelink GT-King Pro is a medium size, and like the GT-King it has a “skull logo” on the top cover (+ Beelink [ogo). The main difference is that the GT-King Pro looks more high-end. Its housing is made of aluminum and has a blue color. The GT-King case is made of black plastic.

On the front panel you will find a black plastic bar, which looks very much like a display. Beelink’s brand slogan “Connect to a wonderful life” is marked here. On one side there is a 2x USB 3.0 port and SDcard slot. On the other side, it has USB 2.0 (OTG) port and anothe USB 3.0 port. On the rear panel are DC jack, Gigabit RJ45 Ethernet port, HDMI 2.1, headphone / AV composite jack, RS232 port and Power button. At the bottom of the device, on the bottom 2 rubber straps to stabilize the device, and information about the serial number.

Beelink GT-King Pro TV Box also comes with 2.4G wireless remote control with an air mouse feature. Voice Remote Control works very well. Recognizes voice commands without any problem. Just press the button with the microphone symbol and say the command. All you have to do is put the USB receiver in the USB port at TV Box. Air mouse works great, makes using the TV Box easier, and works great when playing Fruit Ninja.

When it comes to the experience of using Beelink GT-King Pro, there is nothing new to it. The same UI as in GT-King and most well-known functionalities. Below are the pictures “Home screen” and “Home Screen” with the function bar.

We can choose typically the resolution of FHD 1920×1080 (1080p 60Hz). Everything worked stable and very quickly without delays. We had no problem with Ethernet and WiFi connection to the router and to the Internet. Ethernet: Download – 402Mbps Upload – 30.7Mbps, WiFi: Download – 175Mbps Upload – 30.5Mbps.  In addition to the voice remote control with an air mouse feature, we used a Logitech MK540 Advanced set and a gamepad from iPega called iPega PG-9076.  The device has 64GB storage, exactly as it is in the specification. TV Box supports DLNA and also Miracast. If you need to control the TV Box through a smartphone, you can use CetusPlay (Install CetusPlay On TV/Box app on TV box and open, Install CetusPlay on a smartphone).

GT-King Pro, unfortunately, supports Netflix up to 540p (we have installed the Netflix version v4.16.1) and 1080p Youtube (only full HD), but 4K (2160p) works via YouTube for Android TV. For testing, we installed the latest available Kodi 18.4 “Leia”. On GT-King ProTV Box you can also play in games from the Google Play store. We can confidently say that this is an Android TV Box perfect for games. Games run smoothly with maximum settings. Just connect a gamepad or keyboard. We used iPega PG-9076 and played Beach Buggy Racing, Real Racing 3, Asphalt 8, PUBG Mobile and Fruit Ninja via Beelink Voice remote control with an air mouse.  Below the screenshots.

The GT-King Pro TV Box runs on the Android 9.0, Kernel version 4.9.113. The TV Box comes with firmware build number 905P0, via OTA we have updated the firmware to firmware version 906P0 (big Plus!). The 906P0 firmware version can be found here. TV Box is equipped with new Amlogic S922X-H hexa-core big.LITTLE processor with Quad-core Cortex-A73 @ 2.21 GHz+Dual-core Cortex-A53 @ 1.8 GHz; 12nm manufacturing process, and Arm Mali-G52MP6 GPU. CPU speed between 500MHz and 2.21GHz. On the following screens, you can see exactly the components used and their specification (Information taken from the CPU-Z app, the application does not yet recognize Amlogic S922X-H SoC). Below is also a screenshot from DRM info. The device also has root access. Below screenshots.

For testing, we use the AnTuTu Video Tester 3.0 app and AnTuTu Benchmark v8.1.1.

The S922X-H processor has DTS Listen and Dolby Audio licenses, and the box is compatible with 7.1 audio systems. Unfortunately, we do not have a device with support for these formats. However, we did not see any review that said about the lack of support. If you have an AV receiver that supports all audio formats, you should definitely be satisfied.

If you are looking for a really good and efficient TV Box for home cinema / home entertainment center, Beelink GT-King Pro is certainly for you. Of course, you’ll always find something, some drawbacks. No Google certification, no Netflix HD / 4K. On the other hand, efficient video playback, android games, great design (aluminum housing), DTS Listen + Dolby Audio support, and above all vendor support (firmware update via OTA) can compensate for some disadvantages. A big advantage is the included voice remote control with air mouse feature, which provides fast navigation. We recommend Beelink GT-King Pro TV Box. 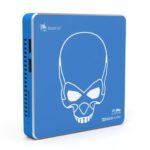