We had the opportunity to test the Beelink Gemini T45 Mini PC, so today we can show you the Beelink T45 review.

As you know, the Beelink Gemini T45 has the same processor as the Beelink J45 Mini PC (Beelink J45 review here). Whether these Mini PCs are comparable or any are better, you’ll find out in our review.

How Beelink T45 Mini PC came out in the tests you will learn from this review. However, we can already tell you that Beelink T45 is another good Mini PC for home or small office use.

The following video from our YouTube channel where you can take a look at more Beelink Gemini T45 and bundled accessories.

Like the other TV Boxes and Mini PC from Beelink, the T45 is another well-made Mini PC. The top cover features the characteristic Beelink’s logo. The housing is made of aluminum. There is also a lack of shiny elements, so no fingerprints will be left on the cover. The housing looks almost identical to the Beelink GT-King Pro TV Box. On the front panel you will find a black plastic bar, which looks very much like a display. Beelink’s brand slogan “Connect to a wonderful life” is marked here. On one side is the Micro SD card slot and 2x USB 3.0 ports. On the other side, it has also 2x USB 3.0 ports. At the back there are: Power button, DC jack, 2x USB 3.0, 1x Gigabit LAN (RJ45), 2x HDMI port and headphone / AV composite jack. On the sides of the device, there are holes for better ventilation. T45 is a fanless Mini PC.

Mini PC runs at a resolution of FHD 1920×1080 (but if you connect a 4K monitor you get an resolution up to 4K 30fps). There were no problems with the Wifi and Ethernet connection to Internet. We launched a few games such as: Beach Buggy Racing, Asphalt 9: Legends and Code of War. As with the J45 Mini PC, games also work without a problem. This is not a gaming PC, but it allows for entertainment.

When you enter the BIOS, you can see that the device has BIOS Version 2.17.1249. J45 Mini PC has 2x 1.4 HDMI port (4K@30fps), and supports dual display. Intel HD Graphics 505 GPU handles this without a problem. To perform video tests we installed version Kodi 18.5 “Leia”. Below you will find many screenshots, we encourage you to browse.

Netflix only up to 720p, but if you use the Netflix app available from the Microsoft Store, Netflix plays video in Full HD

We also tested playback via Youtube 4K on three browsers: Chrome, Firefox and Internet Explore. On all browsers, Youtube video playback in 4K (2160p) resolution was smooth and did not burden the processor. It was similar in the case of Netflix, also played through the browser.

However, due to the lack of active cooling, the housing heats up significantly. An updated version of this Mini PC is now available (equipped with heat sink + fan). Exactly,  Beelink Gemini T45 powered by Intel Apollo Lake N4200. In this version, the Mini PC is more efficient.

Despite several attempts at Beelink, the T45 performed worse than Beelink J45. Compared to the Beelink T45, the J45 Mini PC seems to be better, and the availability of active cooling and the possibility of installing a 2.5″ SATA HDD is a big advantage.

Given the overall operation and user experience, Beelink T45 works similarly to Beelink J45. Beelink T45 works well as a typical Beelink’s Mini PC for the home or small office. However, when it comes to performance, the Beelink J45 seems to be better. The big advantage is the availability of active cooling and the installation of a 2.5″ disk compared to the T45. However, the alternative to Gemini T45 is the upgraded version of this Mini PC. The new upgraded Beelink Gemini T45 is equipped with Intel Apollo Lake N4200 processor and also have active cooling (heat sink + fan). This upgraded model seems to be the better option. 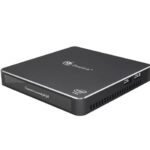