We’re testing the another Mini PC from Beelink called Beelink BT4. That’s why we want to introduce you Beelink BT4 review.

Beelink BT4 is the cheaper Mini PC in Beelink’s portfolio and the successor to the popular Beelink BT3 Pro model. Interestingly, the device has a well-known processor that has been available for several years from Intel, called Intel Atom x5-Z8500.

Will the Beelink’s Mini PC be useful at home for home entertainment (video, games) or more to the office (work with office programs – word, excel, etc.) you will learn from this review. We encourage you to read the Beelink BT4 Mini PC review. Together we follow the standard stages of our review.

I want to say thanks to Beelink brand (Shenzhen AZW Technology Co., Ltd company) for sending us a Beelink BT4 Mini PC to review.

The following video from our YouTube channel where you can take a look at more Beelink TB4 and bundled accessories.

As usual, we will repeat ourselves, but the quality of Beelink’s devices is not objectionable. Mini PC is very well made, with very good quality plastic. The material is pleasant to touch and not fingered. The top cover has characteristic Beelink’s logo and main device features. On the front is diode LED. On one side there are 2x USB 3.0 port and a TF card slot. On the next side there are also 2x USB 3.0 port. At the back there are: Power button, DC 12V jack, Gigabit LAN (RJ45), VGA Port, HDMI port and Headphone microphone jack. On the sides of the device, there are holes that good drain the air obtained from the active cooling. The Mini PC is equipped with a fan, it is not a fanless Mini PC. At the bottom of the device, there are 4 rubber pads to stabilize the device.

The Mini PC comes with Windows 10 Home (activated).  Updating the device downloads easily and correctly. There’s a single 56.6GB C:/ drive that had 33.7GB free space after installing Firefox and Chrome. During the tests, Windows 10 Home runs without problems and stable. We updated drivers during testing. As you will see on the screenshot from Speedtest by Ookla app, after updating the WiFi driver, the speed of WiFi has increased significantly.

Mini PC runs at a resolution of FHD 1920×1080. There were no problems with the Wifi (after driver update) and Ethernet connection to Internet. We launched a few games such as: Beach Buggy Racing, Asphalt 9. In contrast, graphics on Asphalt 9, and above all the smoothness of operation was not the best.

When you enter the BIOS, you can see that the device has BIOS Version 5.011 with compliancy UEFI 2.4; PI 1.3. BT4 Mini PC except HDMI (1.4) has VGA port. This allows you to connect an additional screen and use dual display. To perform video tests we installed the latest stable version Kodi 18.5 “Leia”. Below you will find many screenshots, we encourage you to browse.

Netflix only up to 720p, but if you use the Netflix app available from the Microsoft Store, Netflix plays video in Full HD.

We also tested playback via Youtube on three browsers: Chrome, Firefox and Internet Explore. First of all, interestingly is a streaming video on youtube by Chrome does not work smoothly despite as you can see the processor was not fully used. Streaming video on Youtube by Internet Explorer and Firefox runs properly without delay. On three browsers, the 1080p video was played without any problems. However, on the Chrome browser, each 4K 2160p video was not played smoothly (big problems with loading). In several cases, almost the maximum CPU load, as shown in the shots below. On Internet Explorer playing only up to 1080p, you can not choose 4K.  Unfortunately, this is not a good Mini PC for home entertainment as HTPC.

Unfortunately, Beelink BT4 is a low-performance Mini PC which, as we wrote at the beginning, will work better as a Mini PC for the office than for home use as HTPC. Problems with 4K streaming via Yotube and problems while playing (for example in Asphalt 9) also indicate that this is not a device for home entertainment. In contrast, Beelink BT4 Mini PC can be used for Internet browsing, Office documents and typical office tasks. BT4 is a good mini PC for undemanding users who have a limited budget and want to replace their old PC with a mini computer (also easy to move). 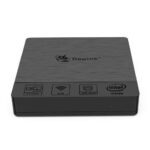