We are after the test, so today we want to introduce you to B2GO X88 King review.  The X88 King TV Box has been available on the market for some time. As you could read, the X88 King is also powered by the powerful Amlogic S922X SoC. Does it also achieve great results in benchmarks, and can it compete with other TV Boxes with similar specifications, you’ll find out in our review.

Is this TV Box worth our recommendation? you will learn from our B2GO X88 King review.

We want to say thanks to B2GO (Shenzhen B2GO Technology Co., Ltd) manufacturer of Android TV Boxes. More details and contact details can be found on the manufacturer’s website.

If you plan to start a business with TV Boxes, or you need a reliable manufacturer who also offers OEM customization, then you should be interested in the B2GO company offer. B2GO is a Professional Manufacturer of Android TV Box since 2006. More information about B2GO‘s capabilities and services, you can find on their website – www.tvbox-manufacturer.com

The following video from our YouTube channel where you can take a look at more X88 King TV Box and bundled accessories.

The front panel has an LED display. On one side there are 2 USB ports (USB 2.0 and USB 3.0) and TF card slot. On the rear panel are DC jack, Gigabit RJ45 Ethernet port, HDMI 2.0a, headphone / AV composite jack and SPDIF optical port. At the bottom of the device, there are 4 rubber pads to stabilize the device and holes for better ventilation. Below also typical Remote Control (known from other TV Boxes).

X88 King has a good looking launcher with well displayed features. Below are the pictures “Home screen”.

We can chose typical the resolution of FHD 1920×1080 (1080p 60Hz) but you can also adjust the preferred resolution or set the auto switch. Everything worked stable and quickly without delays. TV Box support Miracast. We had no problem with Ethernet and WiFi connection to the router and to the Internet. Ethernet: Download – 309Mbps Upload – 31.11Mbps, WiFi: Download – 218Mbps Upload – 30.6Mbps.  In addition to the remote control, we used wireless Logitech MK540 Advanced set and a gamepad from iPega called iPega PG-9076.  The device has 128GB storage, exactly as it is in the specification. If you need to control TV Box via smartphone, you can use great application called CetusPlay (Install CetusPlay On TV/Box app on TV box and open, Install CetusPlay on a smartphone).

TV Box supports Youtube 4K (2160p). Netflix up to 480p. We installed Kodi 18.5 for testing. After installing the application, the kkplayer icon appeared. Unfortunately, optimization requires the Google Play store app. Typical apps from Google Play and games cannot be installed. We installed most of the applications from external memory. We couldn’t install Asphalt 8. We only used Beach Buggy Racing in the tests and it worked without a problem. OTA updates are a big advantage! Below some screenshots.

The X88 King TV Box runs on the Android 9.0, Kernel version 4.9.113. As we mentioned, TV Box supports OTA updates (big plus!). After several updates, the device is currently working on firmware with the date 20191211. TV Box is equipped with new Amlogic S922X big.LITTLE processor with 4x Arm Cortex A73 cores @ up to 1.8 GHz, 2x Arm Cortex A53 cores @ 1.7 GHz and GPU Mali-G52, CPU speed between 100MHz and 1.8GHz. On the following screens, you can see exactly the components used and their specification (Information taken from the CPU-Z app, the application does not yet recognize Amlogic S922X SoC). The device has root access. Below are some screenshots, also from DRM info.

For testing, we use the AnTuTu Video Tester 3.0 app and AnTuTu Benchmark 7.2.0 (we were unable to download the newer from the Google Play store and install from external storage)

As we mentioned, we could not download the latest version of Antutu Benchmark from Google Play and install the application from external memory. Therefore, Antutu’s result is not satisfactory (53816 points). In contrast, X88 King has the same S922X SoC as the Beelink GT-King, so it’s just as powerful TV Box. Below benchmark screenshots we were able to do: AnTuTu Benchmark, GeekBench 4, 3D Mark: Sling Shot Extreme, Sling Shot. X88 King TV Box has the internal memory benchmarks: Read 116.95MB/s – Write 108.93MB/s. RAM copy speed was 4197.77MB/s.

X88 King TV Box is another powerful TV Box with a powerful Amlogic S922X SoC. It’s a good and efficient TV Box for home entertainment. Plays video in 4K also on Youtube. Unfortunately, it requires optimization. The main problem with compatibility with Google Play. Most popular applications are not available or cannot be downloaded. Therefore, it is also difficult to show the performance of the device via Antutu Benchmark. However, its strong advantage are OTA updates. And we hope that with the next update the problem will be fixed. 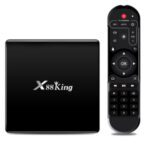