This time we have B2GO T6 projector review for you. It is a budget projector with good specifications and features. Is the T6 LED 720p Multimedia Projector from B2GO manufacturer is worth our recommendation? you’ll find out from our B2GO T6 Projector review. We invite you to read.

We want to say thanks to B2GO (Shenzhen B2GO Technology Co., Ltd) manufacturer of Android TV Boxes. More details and contact details can be found on the manufacturer’s website.

If you plan to start a business with TV Boxes (but not only), or you need a reliable manufacturer who also offers OEM customization, then you should be interested in the B2GO company offer. B2GO is a Professional Manufacturer of Android TV Box since 2006. More information about B2GO‘s capabilities and services, you can find on their website – www.tvbox-manufacturer.com

The following video from our YouTube channel where you can find more details B2GO T6 Projector and bundled accessories.

As we mentioned the T6 Projector it is a budget projector. In contrast, the plastic from which the housing is made and the quality of the projector is fine.The projector’s design is impressive. It is relatively light and the lens aperture used is a big plus.

As we mentioned, there is a sliding lens aperture on the front. Under it, of course, the lens. IR is also on the front. On the right side you will find different ports: AV IN, Audio port, HDMI IN, USB 1 and USB 2 (both USB 2.0). In addition, below, there are holes for better ventilation, and also here, after the grille, we find a built-in speaker. On the left side there is DC jack and knobs for keystone distortion and blurred image. On the back there is a VGA IN port, another IR port and Dust Vent (covering the fan). The top cover on the right has function buttons to control the projector’s features. At the bottom of the device, there are 4 rubber pads to stabilize the projector, also some holes and 1/4″-20 standard for mounting stand. Below also typical Remote Control (known from other TV Boxes).

The projector menu has been divided into four main settings: Picture, Sound, Time and Option. Depending on the choice in each of the main settings, we can set more detailed parameters, of course, the most settings are for Picture. By pressing the Input (house icon on remote control) button on the projector we can choose the source signal between VGA, HDMI, AV, USB1/2, and settings.

We used all sources for testing, the most of which we used, of course, the connection projector + TV Box & Xbox One S. As the TV Box, we used the most popular Xiaomi Mi Box (connection via HDMI).  Display size: 321 cm distance from the protector, 241 cm width, 135 cm height, 108.8 inches diagonal.

Unfortunately, we do not recommend using USB sources. Despite the fact that the T6 LED projector gives this possibility and displaying photos, txt is not a problem for it, in the case of video playback, it is not good. Despite a large number of supported video formats, we usually received a window with information as in the photo below (taken in daylight). Additionally the way photos and video from USB are displayed is not satisfactory either. It is difficult to enlarge the whole screen.

The projector plays music in the following formats: wma, MP3, M4A. As you know, the T6 projector has a built-in speaker. The loudspeaker is quite loud. The measured maximum sound volume from the speaker is about 70dB. The listening quality is sufficient, but, we recommend using an external speaker with AUX IN port. If we are at the sound, we must say that the projector fan is not too loud, we measured the application, about 32.6-34dB. Below photo and video recorded at night. We think the display is satisfying. Below the video sample.

The B2GO T6 LED projector has a brightness of 3,500 lumens, which is not sufficient in daylight. However, at night or in semi-darkness you can easily enjoy the brightness of the displayed picture, you can also use the settings “Picture” for better quality. The projector displays the picture in 16: 9 and 4: 3 aspect ratio. Projector supports the resolution of 1920×1080 (1080p), with native projector resolution 1280×720 (720p). Below are the pictures of the displayed image during the day light.

Below are some photos of the projector.

If you have a limited budget and are looking for a projector that will have good value for money in this case, the T6 LED projector is a good choice. Given its low price ($54.59), it offers very good display properties in a dark room (brightness, distance, key distortion and blur image adjustment). If you are looking for a cheap projector for home entertainment / home cinema that you will use external sources (for example, with TV Box / TV / consola) then you should consider buying the B2GO T6 LED / LCD projector. 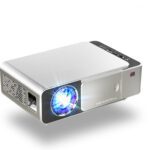